This groom surprised his fiance with a Harry Potter themed sangeet and its too cute to handle! 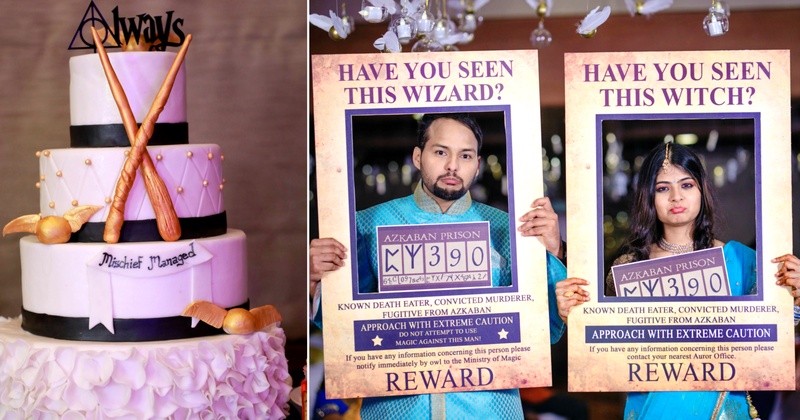 Meet these US-based newlyweds, Arun and Roshna Prakash – they met 2 years ago in Chicago, fell in love and have been inseparable since then. Happily married now, their sangeet was one hell of an event! Arun surprised his fiance and how! Here’s what happened:

The story behind it:

For Roshana, getting married to someone who is not a potterhead was next to impossible. But as they say love is blind, and she did fall in love with Arun who didn’t know the ‘H’ of Harry Potter!

To impress his lady love, Arun watched all the HP movies. When he finally had all the information collected, he found the perfect way to surprise Roshana. He transformed the sangeet venue to a Harry-Potter themed extravaganza! Have a look below:

The ‘Roshna weds Arun’ sign-board was tastefully swapped with this board, having references that only a Potterhead would understand.

2. There were flying keys, snitches, and candles hanging from the ceiling:

3. Look at those wizard props – right out of Azkaban:

4. This is how we imagine Roshna initiated her Muggle-born husband into the magical world of Hogwarts.

We guess he belongs to Gryffindor now 😀 :

6. They did a friendly wizard duel too! *Wingardium Leviosa*:

8. Also, they had their very own Hogwarts Express leaving from Platform 9 ¾:

9. There was a waltzing session too – much like Harry, Ron and Hermione had with their dates at the Yule Ball!

12. A Game of wands? These GOT lovers had an Iron Throne built with magic wands! *can’t stop gushing*

13. Giving us major FOMO with the cake counter:

14. ….and then there were edible Golden snitches:

18. They even had a guestbook with pictures of the couple inside, (total Harry Potter style) :

19. Guest Favours – All the guests who entered as muggles left as wizards:

21. Say Hi to Dobby! We think he is free because now Arun is going to be the slave (of Roshna) ;

A word from the bride, “I’m pretty sure he spent a lot of sleepless nights thinking about this and planning for this. Some of these qualities were actually what made me fall for him in the first place because I’m not a planner or surprise-giver myself. But, even otherwise, I would have happily married him sitting on our couch in our living room,”! *awwwwww*

Plan Your Harry Potter Themed Wedding At These 5 Magical Destinations "You are protected, in short, by your ability to love!" — Albus Dumbledore, Harry Potter and the Half-Blood Prince A story that... Sept. 5, 2019 7 Ways to Ace the Harry Potter Themed Wedding “Yer a wizard, Harry.” Still raises goosebumps on my skin anytime I come across Hagrid’s iconic statement. Decades have passed ... July 31, 2019 15 Trendy Engagement Ring Designs for your Man! Marriage is the most memorable event in your life and engagement defines the beginning of it. And you must “seal it with love”!... May 14, 2019 15 times we saw grooms playing the role of a 'bridesmaid' on their wedding day! There is nothing better than having a best friend in your husband-to-be! We spotted the cutest of couple moments in weddings wh... Aug. 22, 2018 This Groom Surprised his Bride with a Live Portrait and it’s the most beautiful wedding gift ever! I have seen a lot of couples who have surprised their other other halves on the D-day. Some of them have stun their bae with a ... Aug. 16, 2018