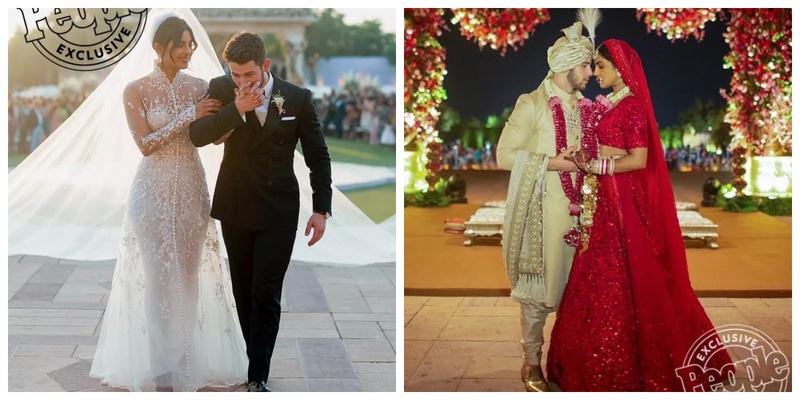 The much awaited pictures from Priyanka Chopra and Nick Jonas’ wedding have finally arrived and I am literally losing my cool! *for real peeps*. Without much further adieu, scroll down to know more:

After saying, “I do” in a Christian Wedding ceremony Priyanka Chopra and Nick Jonas tied the knot in a Hindu ceremony at the Umaid Bhawan Palace in Jodhpur, Rajasthan on Sunday and it was every bit beautiful as I thought it might be.

PC chose to wear a traditional red Sabaysachi lehenga and looked surreal. It was a custom made lehenga with the names of her fiancé and her parents, Ashok and Madhu, were sewn into the waistband of her skirt in hindi.

Priyanka said in an exclusive interview to people magazine, “For the Indian wedding, I wore Sabyasachi. I always knew I wanted a red traditional silhouette for my wedding but Sabya brought in incredible French embroidery to the mix and with incredible jewelry and Western-inspired veil it was just such an amalgamation of who I am”.

Here’s looking at their mandap:

When Nick proposed to Priyanka this summer, the two knew their wedding had to be a meld of their cultures, religions and families.

“Every girl dreams of being a princess on her wedding day. But I never had a plan about what I wanted it to be. Nick suggested to dream big and opt for not one, but two ceremonies in India to celebrate their different backgrounds. It melted my heart.Being able to have two big weddings, in India, with our closest family and friends was unbelievably special.”

The couple married in a Western ceremony on the palace’s lawn and it was beautiful! Priyanka Chopra walked down the aisle as a string quartet played in the background wearing a hand-beaded and embroidered Ralph Lauren gown with a stunning 75-foot long veil!

She was escorted down the aisle by her mother Madhu Chopra that walk did give me some major goosebumps!

“It was all tears. All tears. I could not hold it in. I think I was nervous and scared. But as soon as the curtains opened, and I saw his face it was just like everything settled and I knew I was making the best decision of my life.”

“The emotions were running high during the ceremonies, I think especially during the Western wedding for me. You know you think your whole life about that moment. Honestly, I could not have imagined it would be as perfect as it was. It was highly emotional.”

Ah, here’s saying I am crying happy tears too listening all about their wedding and can’t wait for more pictures!