Getting Creative: How Couples are Tying the Knot During Coronavirus 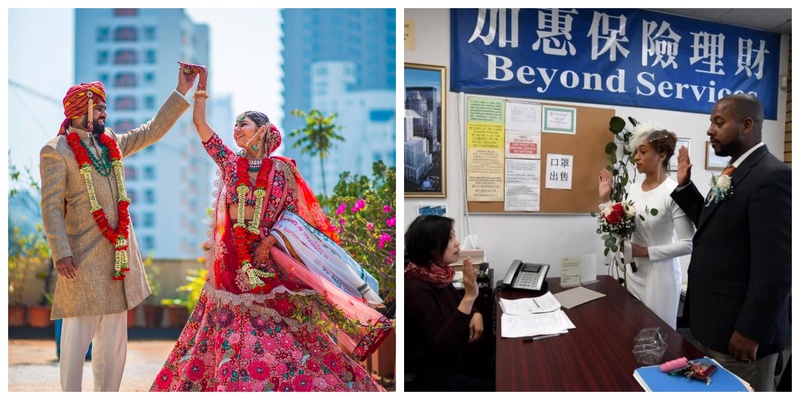 When the going gets tough, you make the most of what you have and cherish the little moments. That is exactly the case for these wonderful couples who got creative with wedding planning. While most couples were forced to postpone their wedding dates, some decided to get a little creative and make use of available resources to get married on the set date. Keeping in mind the health and safety of everyone, these couples made sure that #LoveInTimeOfCoronavirus was a real thing. Read ahead:

Married at a Notary

San Diego residents Rashaun Phillip Sourles and Katira Shores had their wedding date set for April 11 at the Peppermill Resort Hotel in Reno. They had it all planned — a buffet dinner, 55 guests and a layer cake topped with a Muhammad Ali figurine because they met at the museum dedicated to the champion boxer at Louisville, Kentucky. Unfortunately, the state lockdown forced the couple to drive down 2½ hours on 19 March to an Alhambra notary public office completely decked in their wedding attires. Had they waited another day, their marriage would have been postponed indefinitely.

Nani’s house to the rescue!

Remember the #RCBgirl? Yes, the one that became an internet sensation overnight, thanks to the cameraman who constantly focused his lens on her rather than the IPL match that was underplay. Deepika and her beau, Chitang had planned for a lavish destination wedding in Thailand but due to COVID-19, the couple had to cancel everything. Instead, they had an intimate wedding ceremony at the bride’s nani’s home, the same way her parents got married as well! Deepika wore the Dil-Guldasta Sabyasachi lehenga with contrasting emerald jewellery while Chitang looked dapper in a beige bandhgala outfit with a pretty golden and red safa and multi-layered green neckpiece.

‘I do’ on Google Hangouts

As we all know, Social Distancing is the need of the hour. Christie and Jeff decided to take that aspect into consideration, the couple got married on Google Hangouts with their friends and family online to notice the bittersweet moment. With the audience muting their microphones and Vince Guaraldi, Bola Sete and Friends crooning in the background to serenade the couple, Christie and Jeff exchanged vows within the comfort of their own sweet home.

A year of wedding planning for Alba Díaz and Daniel Camino but never did they anticipate a deadly virus to dampen their beautifully detailed wedding day. But, the two did not let it get in their way of getting married. A whopping rise in the number of positively tested Coronavirus cases in Spain, the couple went ahead with their wedding plans by getting married at home and announcing ‘I do!’ from their window for their friends, family and neighbours to cheer them on.

22nd March (Sunday) was announced as Janta Curfew in India which restricted any kind of movement anywhere in the country. But, in Chennai, it was an auspicious day for getting married and most couples had already planned out their wedding for the day. One such marriage was of V Vimalkumar. He was supposed to tie the knot with Kamali at Saidapet, in the presence of DMDK party president Vijayakanth. Following the announcement of Janta Curfew, both parents were apprehensive about going ahead with the wedding without Vijayakanth. On coming to know of this, Vijayakanth decided to solemnise the wedding at his Saligramam residence. Everyone wore a mask during the function.

Danielle Burnette and her fiancé Ismael Cruz may have shifted their wedding plans to August but nevertheless, they exchanged vows last Sunday while going live on Facebook and Skype. This way, their families and friends were present for the lovely moment while being safe and secure within the comforts of their homes.

Wedding trends in 2020 set by the pandemic - a new age of weddings! Image Credits: The Wedding Files, Paran Singh Photography Hello, wedding enthusiasts and future brides/grooms-to-be! Interes... Oct. 15, 2020 Tamil Marriage Dates in 2021 For Your Beautiful Tamil Wedding Effortless, tasteful, and gorgeous to look at, Tamil weddings are an absolute delight. Even though the "bling" that we get to s... Sept. 7, 2020 Bengali Marriage Dates in 2021 For Your Stunning Bong Wedding! Picture credits: CamYogi If the concept of simple yet stunning had to be defined in two words, those words would be Bengali ... Aug. 20, 2020 Marriage Dates in December 2021 The last month of the year brings a lot of mixed emotions with it. Even though it is the coldest month of the year, oddly has a... Aug. 19, 2020 Marriage Dates in November 2021 Now, winter weddings are the most popular in India. The bride and groom get to choose exorbitant lehengas and sherwanis with he... Aug. 18, 2020