What?? Priyanka Chopra and Nick Jonas to be engaged in less than a month, already wearing promise rings! Things are REALLY speeding up you guys! It’s almost been an year since, cupid struck Priyanka Chopra and Nick Jonas, but things are heating up very quickly between the couple and I couldn’t be happier.

From a series of dates and flirtatious comments on each other’s Instagram posts to making it official when Nick brought Priyanka as his ‘plus-one’ to his cousin’s wedding, seems like Nick’s planning to settle down with the Bollywood superstar. Ahem, ahem! I already hear wedding bells. Adding more fuel to fire, Nick Jonas’s Mumbai trip with Priyanka is confirming the wedding rumours. They landed in Mumbai on the 21st June and according to sources, it was because PeeCee wanted him to meet her mother, Madhu Chopra.

Their dinner outing in Mumbai saw them holding hands, and smiling for the shutterbugs while PeeCee’s mother joined in. Here’s what PeeCee’s mum had to say about it, “We just went out for dinner where Nick was present. But it was a large group. There were 10-odd people, so I didn’t get the time to know him that well.” When asked about what she thought of Nick, she said, “I’ve met him for the first time, so it’s too early to form an opinion.” Well well, did you notice their promise rings? With reports of an impending engagement spiralling out of control, these pictures of the two wearing similar gold bands, have only given rise to more speculations about their relationship. Seems like, they are already in that stage of the relationship. The couple later, was spotted enjoying a beautiful monsoon in Goa among friends, clicking selfies and feasting on delicious looking food their fans have been really hoping they make things official really soon. Seems like Nick really is bonding with his future in-laws. Here’s hoping you did not miss Nick Jonas’s insta story about priyanka. In case you did, have a look to find out what it was:

And if you are wondering what does the Desi Gal has to say about it, here you go: 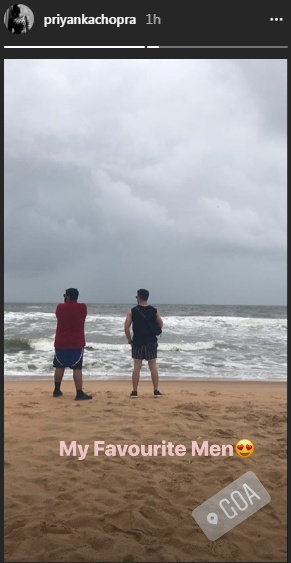 Priyanka shared this picture of her brother and Nick gazing at the sea with their backs to the camera. She also captioned the picture ‘my favourite men,’ and added a heart emoji along with it. If that’s not a declaration of a relationship, I dunno what is.

Rumours are rife that the couple will officiate their relationship and get engaged by the end of July or August this year and I just can’t wait. Till then, I’m just going to wonder if their hashtag made by their fans – #Nickyanka is cool or creepy! What do you think?

Priyanka Chopra & Nick Jonas just got engaged in a total desi way! #Rokafied If you are not living under a rock, and by rock I mean a major rock, you know by now that #Nickyanka have gotten engaged. Nick ... Aug. 18, 2018 Nick Jonas has arrived in Mumbai for his engagement to Priyanka Chopra tomorrow evening itself! #Nickyanka is really happening people! I repeat this is not a drill! Nick Jonas has touched down in Mumbai with his parents! *O... Aug. 17, 2018 Nick Jonas just confirmed his relationship with Priyanka Chopra and supposedly can’t wait to start a family! Things are moving fast for #Nickyanka, and by fast I mean REAL FAST! Priyanka Chopra and Nick Jonas, just made it official you ... Aug. 10, 2018 Sumeet Vyas just popped 'the' question to his girlfriend and she said yes! Just a couple of months ago we saw Sumeet Vyas pop ‘the question’ to Bebo and little did we know the same is gonna happen in hi... Aug. 8, 2018 Priyanka Chopra & Nick Jonas' wedding date, venue & guestlist predicted! #hopewegetitright Just when you thought 2018 has already seen enough of desi celebrity weddings and engagements, that’s when the news hit us. *Ba... Aug. 3, 2018