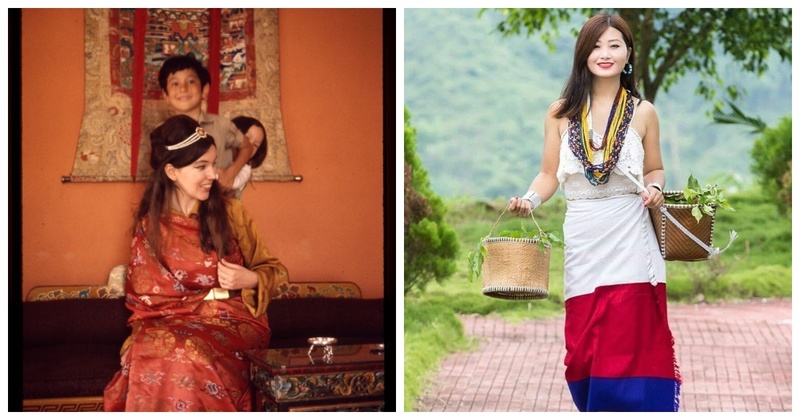 North-East India is truly a distinct and heavenly abode with its lesser-known culture and environment. Weddings in these states have their own rituals, ceremonies and differ from tribe to tribe. The woman is well respected when it comes to marriage in these tribes. Here are a few interesting facts that will make you fall in love.

The last Queen of Sikkim in Royal Attire.

Wedding attire is a tradition that is dearly held onto even in present times. The bride wears an ensemble similar to that of royalty known as a Bakhu. This loose-fitting blouse is made of the finest silk. This outfit is then fastened with a belt which also gives the bride an hourglass figure.

2) It’s All About The Music

The ceremony is called ‘Biya.’ Women sing cultural songs known as Biya Naam or Biya geet. These songs are sung from the first day of the wedding ceremony to the last day.

It is the women who take lead on the Biya Naam and can be from either side of the family. These songs tell tales from mythology about marriage and love.

3) Gifts For The Bride’s Family

The traditions from Arunachal Pradesh are said to be similar to that of Burma, modern-day Myanmar and Tibet. Weddings in this state differ among the 20 and more tribes that exist here. One similar trait that can be found among these tribes is a concept known as ‘Bride Price.’ This is different from the dowry culture. Here a daughter is an economic asset. The groom’s family provides the bride’s family with a Mithun (A type of cattle), fabric and cookware, all for accepting her into their family. A beautiful gesture for lasting happiness.

4) Fish And Fowl To Seal The Deal

Like Arunachal Pradesh, Nagaland too has 16 different tribes. The Ao tribe is one such tribe. When the groom decides to get engaged to a girl of his choice, Ao Naga (Groom/eligible bachelor) usually offers fish to the bride’s parents. They also sacrifice fowls in most phases of the wedding.

5) Gifts and a Whole Lot of Love

Like Arunachal Pradesh, Nagaland too has 16 different tribes. The Ao tribe is one such tribe. When the groom decides to get engaged to a girl of his choice, Ao Naga (Groom/eligible bachelor) usually offers fish to the bride’s parents. They also sacrifice fowls in most phases of the wedding.

6) A Garland And A Prayer

The leilenga ceremony takes place on the wedding day. The bride makes the wedding garlands for herself and her partner. She is also asked to pray for a peaceful and joyful marriage during this ceremony.

7) A Feast when the Bride Comes Home

Mangani chakouba or a feast is arranged five days after the wedding in the bride’s home. This is a lot of fun and the most joyful event.

8) A Manipuri Bride Wears A Basket

A Manipuri bride wears a traditional Rasleela dress for her wedding as she emanates Radha. Manipuri weddings place emphasis on the Tulsi plant and make it the focal point of their ceremonies

In the Khasi community in Meghalaya, the man leaves home. He becomes one with his wife through marriage and goes to live with her. This is a different custom compared to rituals across the Indian Subcontinent.

10) The Family In Traditional Attire

As most Mizos are now Christian, they follow most of the western wedding rituals. It is the ladies from both families who wear a traditional colourful wrap called “Puan” (the Groom’s family)  or “Puanchei.”(the bride’s family)

11) The Marking Of Betel Leaves And Nuts

Women in traditional Tripura culture, on the day before the wedding, mark betel leaves and nuts with the name of the bride and the groom. They make a sound known as the ‘Ulu’ to bestow their blessings on the couple. This ceremony is called ‘Kuaitano.’

The seven sisters are all about the bride tribe!

10 Indian Wedding Customs Decoded For You A typical Hindu wedding is full of traditions that bring together the two families of the couple in many sacred, meaningful rit... Oct. 15, 2019 8 Amazing Wedding Traditions from Around the World All weddings are unique and special in their own way. Each region and every community has its own set of traditions and customs... Aug. 9, 2019 10 Strange Wedding Traditions Practised in India 10 Strange Wedding Traditions Practised in India   A wedding is that occasion of the year bringing together families, friends, ... July 18, 2019 Unusual And Weird Wedding Traditions Around The World That Will Make You Go 'Whaaatttt??' Every community, every sect has a different set of traditions and customs that they follow. Marriage is a common factor but wha... Dec. 20, 2017 Muslim Wedding Rituals and Traditions to Expect At an Islamic Wedding Muslim weddings are similar to Hindu weddings, except their rituals and traditions have different names and vary slightly. Also... Jan. 24, 2017