10 Types of Guests present at every Indian wedding! 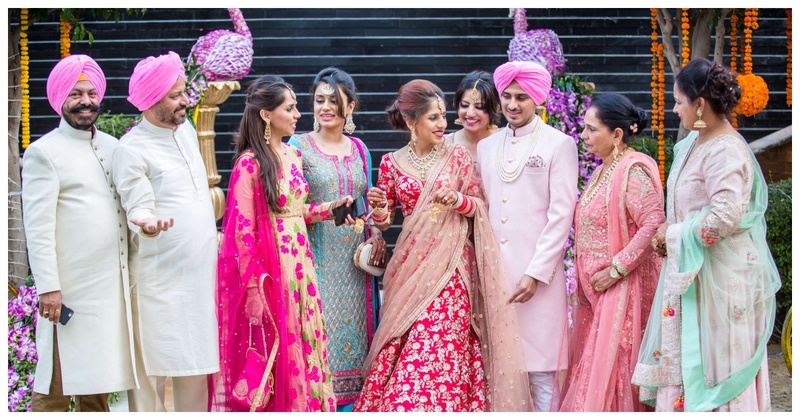 Indian weddings comprise of 3 primary factors- guests, food and the priest. The bride and groom and their families seem to be secondary in comparison! After all, guests nahi honge toh itni shaandar shaadi ki taarif kaun karega? They make up for the 95% of the crowd at weddings so they definitely deserve a blog of their own! Presenting you, types of guests that you’ll come across at any and every Indian wedding!

You’ll observe at least one school of fish stationed at the bar, siphoning the last drop of alcohol. They won’t hesitate in drinking their 78th glass! The funny thing is only an amateur few will sway in their way but our master drinkers will be upright even after their 2012th drink!

These people have “I am a disco dancer” tattooed on their forearms. If you miss their tattoos, their mind blowing moves on the dance floor will be enough to tell you the same. Careful, for their thumkas have the power to push you far away from the floor!

There’ll be at least one nitpick at a wedding. He/she will constantly find faults in every small detail. From the stage decor, to the drapes, from the bride’s attire to the groom’s mother’s attire, nothing escapes under their scrutinizing watch! You’ll even hear them say things like, “Humare beti ki shaadi pe toh gold ke thaali pe khaana serve hua tha!”

Ughh, of the entire lot, I despise the photo fanatics the most. You’ll find them clicking selfies in each and every pretty corner of the venue. They’ll ask the most random people to take their pictures! Once my sister annoyed me so much with her obsession that I almost paid a stranger to click her pictures at a wedding!

I like to call these guys the wedding geeks. They are always at loggerheads with the opposite party, often without their knowledge! They are much like Naina from Yeh Jawaani Hai Deewani. Bunny did not call her “Border ke Sunny Deol” for nothing!

Move over bride, the overly dressed squad is here! Some people just overshadow the bride with the amount of bling and glam on them. Ugh, shine at your own wedding, sister!

Mohalle ke aunties know everything! For them weddings turn into breeding grounds- they breed gossip 10x faster! They’ll even tell you about your past relationship with that “bandar jaisi shakal wala lakda”

Last but not the least, the VIPs! It can be your Amreeka wale ameer fufaji who demands respect or that one far fetched relative who has political connections. Somehow they are deemed as important. I think they have tags on them that read “Fragile. Handle with care!”

Which one defines you the best?

5 Annoying Things That Only Happen at Indian Weddings There is a lot that goes on in an Indian wedding. The ‘organised chaos’ of people getting together to celebrate the love of a c... Aug. 24, 2019 10 Unique Guest Book Design Ideas for your Wedding The wedding function is almost like a blink and miss, and before you know it you are hitched for life! If there is anything tha... July 31, 2019 5 Ideas to make your Saath Pheras more fun & interesting!   Unlike other countries, India is well known for its wedding customs. The ‘saath pheras’ are an integral part of all the weddi... May 20, 2019 7 Wedding Games that will entertain your guests to the fullest! Indian weddings are no less than mini festivals. It’s a pompous but a long ordeal. Can you imagine how boring it can become for... May 15, 2019 7 Unique Experiences to look forward to while honeymooning in Europe! I took a small break from writing about honeymoons for I would get lost in the beauty of each and every place that I’ve mention... May 15, 2019