10 Ways in Which You Can Include Bollywood in Your Wedding! 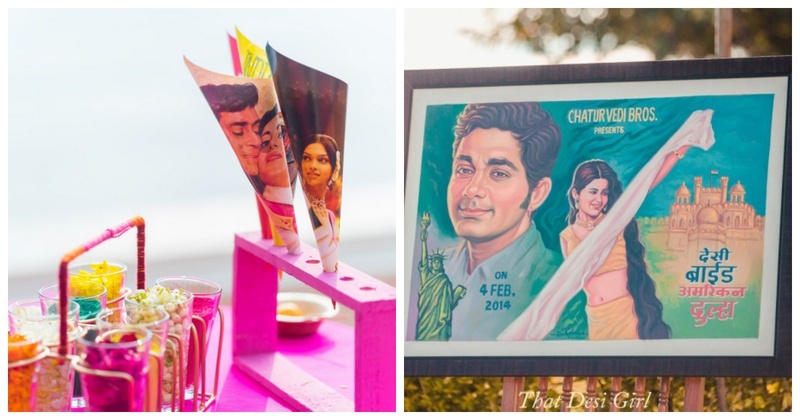 If cricket is a religion in India, Bollywood is the daily prayer. From the regal Mughal-e-Azam to the not so regal Badrinath ki Dulhaniya, Bollywood has created a lasting impression on us. Memes, fashion, lifestyle almost everything we do includes a little bit of Bollywood in it, don’t you agree? In fact, our weddings are incomplete without the naach-gaana and drama that Bollywood taught us!

In the 80s and the 90s, Yash Chopra set the tone for elite, larger-than-life sangeets, and weddings while in late 90s Karan Johar’s Kuch Kuch Hota Hai and K3G gave us a glimpse into hyper-privilege weddings with designer clothes, and functions galore! But, while these are ‘too much’ and not really practical, there is no harm in including glimpses of Bollywood in our weddings, right? How, you ask? Just take a look at these 10 couples who did not hesitate once to flaunt their love for Bollywood through their wedding!

Grooving to Bollywood songs is common, but what about a Bollywood themed sangeet? Love how The A-Cube Project has paid attention to the smallest of details!

Bride Preksha Mukul wore a floral Sabyasachi lehenga for her wedding. This is the same lehenga that Deepika Padukone wore for her post wedding party in Mumbai!

Subiya and Sagar hosted a Bollywood themed party in Bali. Each of their guests was dressed up as a character from the movies. In fact, Subiya used to work for Phantom films. She wore the original costume worn by  Alia Bhatt in the song ‘Gulabo’.

Sonal and Jitin’s sangeet was nothing short of a red carpet event! They even recreated the Walk of Fame.

This bride recreated Sonam Kapoor’s mehendi look for her mehendi ceremony. She wore an ivory chikankari lehenga, similar to the Abu Jani Sandeep Khosla one. Her braid was also wrapped around in a gajra, just like Sonam Kapoor’s!

I am in love with these snacks’ cones! They have a typical vintage Bollywood charm to them!

Bride Ravina created quite a stir with her wedding lehenga. She wore the same lehenga as Deepika Padukone, complete with the dupatta that read ‘Sada Saubhagyawati Bhava‘. The only difference was that Ravina chose an embellished blouse, unlike Deepika Padukone who wore a simple and subtle blouse.

How cool is this wedding poster? The couple must be true blue Bollywood fans!

A matchbox that doubles up as a wedding invitation? It has Bollywoodesque illustrations on it! Such an invitation will surely impress the guests. Kudos to the brains behind this invitation!

Woah, this wedding cake with camera reels and some of the most iconic Bollywood quotes made my Monday!

Now you know how to infuse your love for Bollywood into your wedding!

8 Bridal Outfits For The Bollywood Bride Bollywood and brides in India are a match made in heaven. From the exquisite lehengas and gowns to the gorgeous locations, Boll... Sept. 5, 2019 Unseen Pictures from Aishwarya Rai and Abhishek Bachchan's Wedding! The green-eyed beauty, Ex-Miss World and one of Bollywood’s most beautiful actresses, Aishwarya Rai now-Bachchan made headlines... Aug. 22, 2019 Never Seen Before Wedding Pictures of Shweta Bachchan Nanda! As Abu Jani Sandeep Khosla celebrated 33 years in the industry yesterday, they took to Instagram to share some unseen pictures ... Aug. 13, 2019 5 Iconic Looks of Kajol from her Movies Earlier this week, Kajol celebrated her 45th birthday. Blunt, bright-eyed and brilliant, she has been a prominent personality e... Aug. 10, 2019 6 Bollywood Divas who Walked Down the Aisle in White It is every girl’s dream to have a perfect wedding. Dressed in the perfect dress to celebrate one of the most important days. W... July 15, 2019