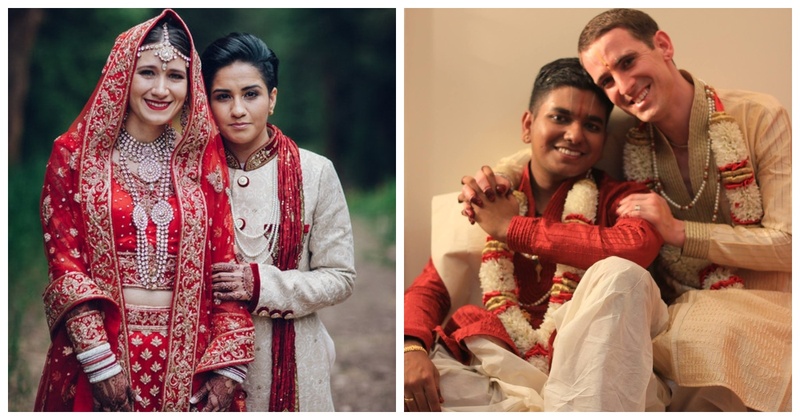 Love is a fickle thing, they say. While in all honesty, it is simple and beautiful. You just have to let love be and see how it unravels its divine self. The LGBTQ community  has been vocal about the above stated facts for ages now. We celebrate weddings all year round, and it is time for us to highlight all those stories that deserve attention! This blog is all about those 5 Indians who looked beyond petty factors and got married to the love of their life!

Monica and Albertine were the first same sex couple to be featured on our website. These two lovebirds met via the dating site OKCupid.com. Albertine spoke so much during their first date that she was convinced Monica doesn’t like her. But when they left the restaurant, Monica kissed and asked her out for a second date. Soon they were hiking, camping and doing everything together.

Monica asked for Albertine’s hand when they went on a camping trip together. Their poor friend had to carry champagne on his back all the way! Their wedding showed us an amalgamation of two cultures and was truly beautiful.

Salaphaty and John met each other on an online group for Hindu gay individuals. Salaphaty used to reside in Melbourne while John lives in the USA. They knew they had to meet and made India their middle ground due to their shared believe in Hinduism. Amidst all that planning, these two cuties fell in love. Salaphaty proposed to John in Ohio and they got engaged in a temple in a traditional South Indian ceremony.

Ishan and Surya make for an incredible couple mainly because of  their unique story. Ishan and Surya are the first legal trans couple to get married in the country! They both are a part of the Transgender Justice Board and went for sex change operations a few years prior to their wedding. Their wedding was attended by their family and friends from the community. Kudos to Ishan and Surya, who overcame their fears and proved the society wrong!

On a sweltering June morning, a few hours away from Mumbai, two men very much in love were being smeared with haldi to mark their wedding festivities. Hrishi and Vinh formally got married in December but held a reception for Hrishi’s family in June. Hrishi’s parents were hesitant at first but later threw a pompous reception for their son and his partner!

Kalavati and Miriam made history by being the first interfaith lesbian marriage in UK. They got married nearly 20 years after they fell in love. Kalavati said, “Once I told my friends and family a few years ago, they were very warm, welcoming and embracing to Miriam, which is very important.”

Both of them wore red and white sarees on their special day with garlands around their necks. Have to say, even after 20 years, they look giddy in love!

These couples are proof that love triumphs all!

12 Brides who prove that South Indian wedding couture is the best! Do you remember that Tanishq ad about a Punjabi family out shopping for their daughter’s wedding jewellery? The granny peeps at... April 6, 2019 Ace designer Anita Dongre revealed her Spring Summer'19 collection and we are in love with it! Just when we were reviving from the beautiful couture worn by everyone at Yash Dongre’s wedding, Anita Dongre sprung (all puns ... April 5, 2019 Hilarious shaadi videos that will brighten up your day! Today is the start of a new fiscal year, it is also a Monday but thankfully it is April Fool’s day! Monday and April Fool’s Day... April 1, 2019 Shantanu & Nikhil just unveiled their Spring Summer Collection and it is absolutely splendid!   For some a new season means change in the weather, clothes and food. But for crazy people like us, it remarks the time for re... April 1, 2019 7 Things to keep in mind while getting your lehenga stitched   As kids we’ve made innumerable trips to the darzee so that he can stitch wonders out of pieces of fabrics. In the dawn of rea... April 1, 2019