In India, there are 100s of regional communities, each one residing in close proximity to the other. Each of these regional communities presents some really fun and interesting customs that are worth witnessing. One such community is that of the Kodavas. Kodagu (popularly known as Coorg) is a beautiful region in Karnataka, known for its coffee plantations and lush green terrains. What makes the region so special are the Kodavas (local people), their local cuisine and age-old traditions.

Kodavas have a rich history resplendent great cultural values and beliefs. Their lifestyle is a result of adapting to their local environment and making the best of what they have. These cultural values are prominent in their traditional weddings. The people have always been known to live and work as a clan and that is applicable to a wedding too.

A typical Kodava wedding spans over two eventful days. The Urkooduva (village gathering) takes place on the first day of the celebrations. Everyone is actively involved in the wedding preparations. A representative of every okka (clan) residing in the nad (administrative unit) participates in the preparations and is instrumental in accompanying the groom to bring the bride home. There is a pandal set up on the first day, decorated with mango leaves, bunches of bananas, a fifth post made from a sap-exuding tree to support the structure and a canopy of young jackfruit tree leaves, or wild litchi branches and leaves. The aruva plays a very important role during the two days. The aruva is basically a mediator between the bride and groom. He also overlooks the preparation of the grand feast that takes place the night before the wedding. He is also responsible for setting up the fifth and main kamba for the pandal. 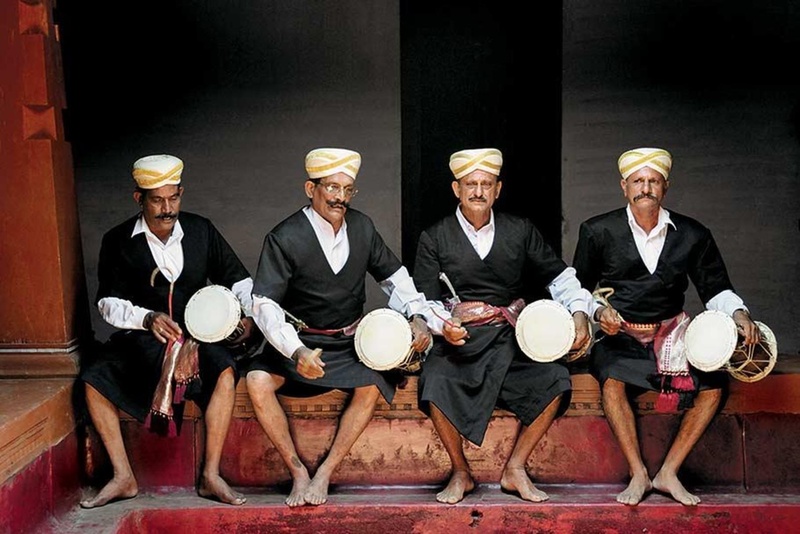 During the evening, a small party is thrown for close relatives and friends. Alcohol and different varieties of meats are served as snacks and mains. Pork is an extremely important part of a Kodava wedding feast. Unlike most other weddings in India, meat (especially pork) and alcohol are imperative in a Kodava wedding. Kodava Groom: The groom is dressed in the ceremonial and sacred white kupya (white outfit) and holds the gejje thande (waist high staff made from the Kari mara tree, decorated with strips of beaten silver and tiny bells) in his right hand. Tucked into his chale (strip of cloth tied around his waist) is his peechekathi (a compact silver dagger, curved at the end and held in an ornamented sheath). A heavy thodang (metal clasp of brass or silver, fixed at his waist) holds the odi kathi or kurkathi (large Kodava war knife at his back). He also wears the crescent-shaped Kokketathi, studded with cabochon rubies, decorated with tiny seed pearls. 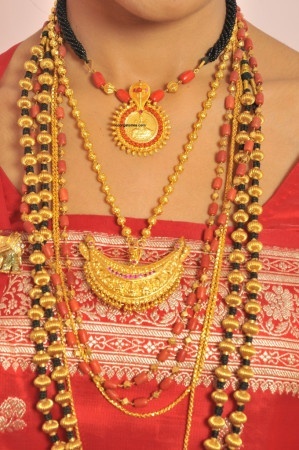 Kodavathi Bride: Talking about traditional attires, a Kodava female’s sari definitely stands out as unique in comparison to other sarees in India. The pleats actually appear at the back and the end of the sari is brought below the left shoulder, and secured over the right shoulder in a firm knot called molakattu. This was done keeping in mind that the locals were extremely active having to work hours in the field or climb trees in case of a wild animal encounter. The bride wears a red silk saree with gold brocade. She also wears a piece of cloth that looks similar to the saree on her head, called vastra. Baale Birudu: On the path leading to the wedding hall, a row of nine or more (in multiples of three) banana stalks are planted into the ground. The first member prays to his ancestors and the village gods, and strides around these stems and then in neat strokes he slashes off three stems one after another. Then the next member takes over, slashing the next three and then the last member finishes off with the last three. There is a lot of mirth and laughter as this ceremony goes on, hooting and encouragement to do well and prove their warrior roots.

After successfully slashing the banana stems, the groom is led by his bojakaara (groomsman) who holds an umbrella covered with a white cloth held over the groom’s head.

Wedding Ceremony: What most people find surprising is the absence of a priest or rituals to overlook the proceedings of a typical Kodava wedding. Seeking the blessings of the Goddess Kaveramma is the extent to which religious rituals are present at a wedding; for the rest, it is the blessings of the ancestors and the presence of the elders that guide the occasion, and the ancient dialogue between the aruvas of two clans called the sammanda kodupo, which solemnizes the marriage. The groom sits first laying aside his odi kathi and gejje thande. It is the mother who has the honour of blessing her children before anyone else. Taking handfuls of rice from the bell-metal or silver plates, she showers it on their heads and offers a sip of milk from a tiny pot. A gold coin given in blessing by the mother is tied to the shoulder of the bride’s sari. Once married, the Kodavathi woman also wears a pathak (gold coin set with corals or rubies, surmounted with a cobra hood). This pathak is associated with various symbols of fertility and is tied by the bride’s mother instead of the groom. A Kodava marriage is all about sharing and partnership. The aruva, enumerates the list of properties in which the bride has been given rights, including the chunde fruit. It is a small and insignificant thing but it basically denotes the bride’s right over everything. Later, the groom ties a small silk bag (containing a gold, silver and copper coin) to the corner of the bride’s sari expressing the complete sharing of possessions. Wedding Feast: The wedding day meal is much more elaborate. An average menu might consist of kadambuttu (steamed rice balls), paputtu (steamed rice bread), pandi (pork) curry, a chicken dish for the ones who do not eat pork, plain rice and vegetable preparations. The meal will end with a payasam, kartha coffee or black coffee with jaggery, and bananas. The food is served on a plantain leaf with a glass of alcohol, preferably rum. Homemade wines from betel leaf, bird’s eye chilli is also served during weddings. It was also once customary to place cigarettes or beedis along with the betel nut plate, for the departing guests. Now, betel nut and bananas are served. 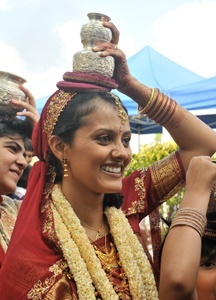 Nir Edepe: The bride is welcomed into her new okka with a special tradition known as Nir Edepe. Family and guests gather around a well as the bride peels and eat a banana. Once done, she takes three areca nuts and carefully balances them on top of three betel leaves. Carefully, these are then placed in the family well. Then the bride breaks a coconut with her husband’s peechekathi (Kodava war hand-knife) allowing the two halves to drop into the well. She removes the betel leaves and areca nuts and chews on them while removing water from the well. She fills four pots, carrying two of them on her head and accompanied by two ladies carrying the other two pots. The bride then slowly makes her way to the kitchen while tackling hurdles like distracting relatives and items placed in her path. This custom is done to test the bride’s patience, endurance and sense of humour.

If you ever get the opportunity, please do attend a traditional Kodava wedding. It is truly a one-of-a-kind and wonderful experience!

Remembering the Legendary Sridevi on her 56th Birthday Last year on 25th February India woke up to the terrible news of veterean actress Sridevi’s demise. Tributes poured in from eve... Aug. 13, 2019 5 Ways to Protect Your Lehenga in the Monsoons A comfy corner, a few cosy quilts, a book and a cup of chai. Yes, I just described the perfect rainy afternoon to you. We’ve be... Aug. 9, 2019 10 Strange Wedding Traditions Practised in India 10 Strange Wedding Traditions Practised in India   A wedding is that occasion of the year bringing together families, friends, ... July 18, 2019 All You Need To Know About Marwari Wedding Rituals And Customs! Marwari or Rajasthani weddings are strong rooted in culture and tradition, and so have a beautiful heritage quality about them ... Jan. 31, 2017 A Guide to Sikh Wedding Rituals, Customs and Traditions If you’ve been following us, you may have noticed that we recently did a blog on Punjabi wedding rituals and customs. This time... Jan. 30, 2017