A-Z guide on Punjabi wedding rituals and all you need to know about them! 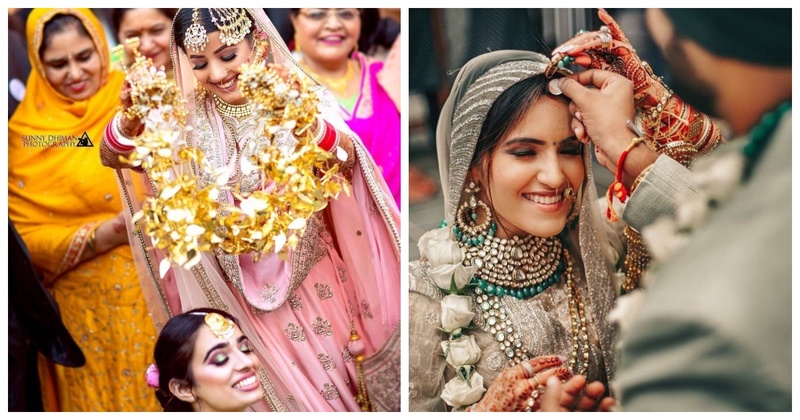 When someone talks about a ‘Punjabi wedding’, the first image which is more likely to pop up in your head is a loud, extravagant wedding ceremony filled with food, fun and loads of dancing! Trust me, there is lots more to a Punjabi shaadi than just that. After reading this blog I am 99.9999999% sure all your myths pertaining to this will be BUSTED!!

From some unheard and lesser known rituals to conventional ones and from simple ceremonies to the more exorbitant ones- these weddings have it all.

Here is a comprehensive complete guide on Punjabi wedding rituals for all you brides-to-be to help you gear up for an enjoyable ride ahead:

The word ‘Roka’ comes from the word ‘Rokna’, which indirectly implies that now the bride and groom can stop looking out for other wedding prospects and they are fixed in an alliance. The bride’s and groom’s families visit each other’s houses and exchange sweets, dry fruits, savouries et al.

‘Thaka’ is a ceremony as a part of which the couple is made to sit together and showered with gifts or shagun and are considered as officially engaged.

The members of the groom’s family visit the bride’s household with jewellery , gifts, sweets and a red-coloured outfit like a saree or lehenga-choli, along with a red chunni or chunri.

The chunni is placed over the head of the bride, this ceremony is called chunni chadana.

In most Punjabi families this ceremony takes place on the same day as the chunni chadana. Some families like it to be a private and intimate affair, while others invite a lot of guests and celebrate it elaborately. The couple exchange rings as part of the ceremony and gifts are given to the bride and groom.

Every quintessential Indian bride cannot ignore the mehendi ceremony and it is an unmissable part of wedding functions. The bride gets henna applied on her hands and feet- usually going all out in selecting the best and most customized designs.

Other than the to-be-bride other girls and women (married and unmarried) also get mehendi applied. This function takes place at the groom’s and bride’s houses, with their own set of guests.

Sometimes, the sangeet ceremony takes place on the same day, post the mehendi. In some cases, it takes on a separate day altogether. Every element of this ceremony is exquisite, extravagant and tooooo much fun. Dancing, singing, games and activities keep the couple and the guests busy!

This ritual takes place on the morning of the wedding itself. A mouli or sacred thread is tied on the bride’s and groom’s hand in their own homes respectively. It is considered as a lucky charm to ward off evil.

This ceremony includes a havan and all family members take part in this ritual. The maternal uncle/mama and his wife gift a set of 21 bangles (mostly red and ivory) to the bride.

This ceremony is related to the chudha ceremony and takes place immediately after the bride wears the bangles. This traditionally gold-coloured accessory is not only to make the bridal ensemble stylish. It actually denotes, well-being, happy conjugal life and fertility. These kaleeras are usually encrusted with betel nuts or dried fruits. In a traditional ceremony, the bride is supposed to shake the kaleeras over the head of an unmarried girl, who she wishes to see married next. If the fruit or betel nut falls over her head, it is believed that it is sure she will be next in line to tie the knot!

This ceremony may take place one day earlier or on the morning of the wedding. On some occasions it takes place at the bride’s and groom’s home separately, while at times it’s clubbed together.

The women of the house apply a mix of rosewater, turmeric, sandalwood and mustard oil on the visible parts of the bride’s and groom’s body. The new-age haldi ceremonies are full of merriment, dancing and fun!

After the haldi ceremony. The bride accompanied by her siblings goes to a nearby temple. There, a pitcher of holy water is poured over her and she enters the sanctum sanctorum to seek the Lord’s blessings.

Before the wedding ceremonies commence, the bridegroom and his family assemble for a puja. As a part of this, the bridegroom is made to wear a turban and a headgear or sehera, which covers his face.

The traditional baraat includes the groom, who rides his horse (or rather mare) and reaches the wedding venue where the ceremonies take place, with his close family and friends dancing as a part of the baraat.

Before the groom begins the journey on the mare, she is decorated and fed a mixture of chickpeas and jaggery.

This is the most warm and hospitable ceremony of the wedding and Punjabis are definitely known for these two attributes the most!!

The bride’s family gives a warm welcome to the groom and his baraatis (guests). This may also include an aarti ceremony.

This is a short and simple ceremony wherein the bride and groom exchange garlands and commence the wedding rituals.

This is a very old vedic tradition. After the jaimala, the bride and groom sit around the fire. The groom is given a bowl of water. He sprinkles some water on his feet, then on his body and sprinkles some around him.

After this, the groom is given a sherbet or madhuperk made of clarified butter, curd, honey and some essence to drink. He sprinkles some in all directions before sipping on it.

This is a rather touching and sentimental wedding ceremony. The father of the bride gives his daughter’s hand (literally) in the hands of her groom and asks him to treat her with love, care, attention and respect!

The couple has to circle around the sacred fire seven times. For the first three rounds, the bride leads from the front and for the remaining rounds, the groom leads. Every round is symbolic and with every vow the couple is supposed to take a vow towards their married life, while the priest recites mantras. After these end, the priest declare them married.

After the completion of the pheras, the groom anoints the forehead of the bride and fills her parting with vermillion. This signifies the beginning of married life for the bride and groom. It is symbolic for the bond that is to last for the next seven lifetimes.

While the bridegroom is busy with the wedding ceremony, the bride’s sister/sisters hide his shoes and later demand a ransom from him, if he wants them back. All this is done for pure fun and in jest. After a lot of bargaining between the two parties, they finally come to an agreement and the groom pays a certain amount of money for his shoes.

This is heart-wrenching part of the wedding ceremony. The bride has to bid adieu to her family and her ‘maayka’. She throws a handful of rice over her shoulder in her family’s direction, expressing gratitude towards them for raising her and taking care of her. She then sits in her groom’s car and leaves for her new home.

When the newlywed couple reaches home, the groom’s mother does the bride’s aarti with a pitcher of water. After each circle, the bride’s mother-in-law attempts to take a sip of water, however, the bride prevents her from doing so, until the seventh attempt. The bride then overturns a pot of rice or kalash, with her right foot and enters the house.

Firstly, the family seeks blessings from the household deities. Consequently, the bride is seated in front of family and friends and her veil is lifted, for everyone to see her face. She is then showered with gifts, cash and jewellery by the elders.

A lavish and extravagant party is thrown in honour of the newlyweds by the groom’s family. This ceremony is filled sumptuous meals, dancing and a lot of meeting and greeting.

A day after the wedding, the newlyweds are invited by the bride’s family for a small gathering or a dinner. Close friends and family of the bride are present at this get-together.

Now all you have to do is get ready and have some fun!

Failed to send your enquiry.
Please try later or contact our 24-hour helpline +918048070833
or drop in a mail to info@weddingz.in for any queries

10 Indian Wedding Customs Decoded For You A typical Hindu wedding is full of traditions that bring together the two families of the couple in many sacred, meaningful rit... Oct. 15, 2019 15 Interesting Wedding Myths and Beliefs Around The World 15 Interesting Wedding Myths And Beliefs Around The World Myths and beliefs have been passed on through generations, be it cult... Aug. 27, 2019 Best Wedding Halls in Ludhiana to Host Grand Punjabi Style Wedding Punjabi wedding is known for all the glitters and glitz, glamour and bling. So if you want a flamboyant Punjabi style celebrati... June 3, 2019 10 Arijit Singh songs that are just perfect for your couple dance! When it comes to romantic songs, nobody can beat Arijit Singh. He created waves with his super romantic song Tum Hi Ho. His mag... April 28, 2019 10 Songs That you can perform on with your siblings at the sangeet or mehendi night! Is it possible to love someone and have a strong yearning to kill them at the same time? Yes of course! That someone is otherwi... April 28, 2019


Sorry!
Failed to send your enquiry.
Please try later or contact our 24-hour helpline +918048070833
or drop in a mail to info@weddingz.in for any queries

Why not plan the entire event with India's Largest Wedding Company?
Few more clicks & we will give you the perfect event plan!
Sorry!
Failed to send your enquiry.
Please try later or contact our 24-hour helpline +918048070833
or drop in a mail to info@weddingz.in for any queries