After a Sangeet Night which was nothing short of a concert itself, here’s the first look of Priyanka Chopra and Nick Jonas as a married couple! 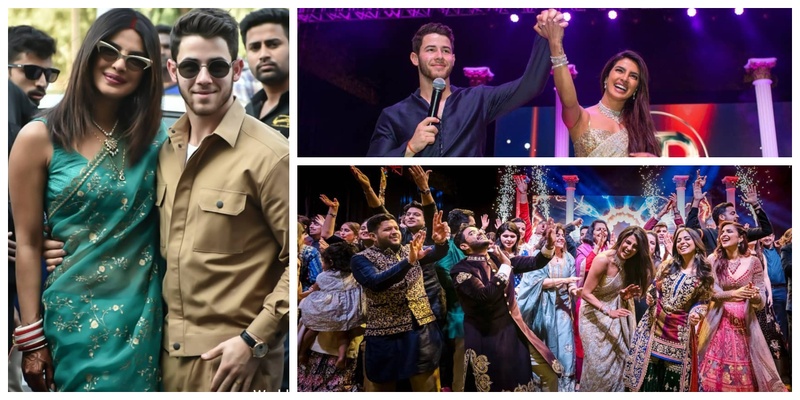 Our desi girl and her pop-star bae Nick Jonas have tied the knot in a  Christian Ceremony on Saturday and are officially Husband and wife now! What’s also exciting is that the couple tied the knot according to Hindu Wedding traditions as well and while we are at the mercy of former Miss World to share the pictures, here’s their first official pictures as ‘Husband and Wife’:

Having seen that let’s talk about the Sangeet Ceremony, which was nothing less than a concert itself. Rest assured, when you have one of America’s biggest singing sensations as the groom, his brothers and former boy-band members as groomsmen, and a global-icon and actress as the the bride with her equally talented family, it is bound to be one hell of a performance! Have a look at the video to know for yourself:

And here’s all the highlights from this magical night:

The Jonas brothers picture that shook the Internet:

Priyanka’s cousin Parineeti Chopra gave a solo dance performance at the sangeet. Totally loving how she is seen hoisted on a boat with wind blowing in her hair. Are they re-enacting the Titanic?

Here’s what she had to say about it, “For our SANGEET, the Chopra family decided to depict Mimi didi and Nick’s love story though songs, scenes and skit – full bollywood style!!! The whole family rehearsed for days and days. And were ready to beat the Jonas side hollow!!! But when the ladka wallas came on stage, they stumped us. They had been rehearsing for a long time. They sang and danced LIVE, including lip syncing hindi songs!!!!!! Damn, we should have known. All of this – but the spirit of competition was overpowered with love, happiness, laughs, whistles, cheering and noise!!! Wow wow wow. WHAT A NIGHT. P.S. We shared the trophy.”

Joe Jonas performed at the Sangeet:

A bit from the video shows Joe Jonas performing at the sangeet. He is the lead singer of DNCE. *can it get better than this?*

Reports go by that Parineeti had been trying hard to persuade her ‘almost’ jiju to shake his leg on a Priyanka Chopra song with the to-be Mrs herself! Pinkvilla said, “Parineeti has been trying to persuade Nick to dance to one of Priyanka’s songs with her.” Looks like Parineeti did a good job on that! Apart from this, Nick also did a 45-minute performance with his band for his lady-love. *awwwwwww*

The Ambanis took the front seat:

Pictures from the sangeet ceremony show the Ambani family to be sitting in the front seats with the bride, groom, and their families and from the looks of it, they had a BLAST.

Sophie Turner – Priyanka’s to-be sister-in-law wore a red lehenga and was seen making some killer moves in one of the pictures from the sangeet.

The mom and daughter dance:

The video also saw Priyanka dancing with her mother on stage and it literally was too cute to handle! Totally digging Madhu Chopra’s dazzling blue saree.

This is what the ecstatic bride had to say about it :

“It all began as a fierce song & dance competition between the families but ended, as always, as a huge celebration of love. Nick and I were looking forward to the Sangeet (musical evening), another pre-wedding ritual.. and to see what each side had put together. And what a performance it was.

Each family telling our stories through song and dance, filled with lots of laughter and love. We were both filled with gratitude for the effort, the love, and the laughter and will carry the memories of this special evening for the rest of our lives. It is an amazing start to a lifetime of togetherness for our families and friends.. #grateful”

The ‘sasu-ma’ wedding gift for her bahu is massive:

Reports go by after the whole shenanigans ended, Mama Jonas – Denise gifted her daughter-in-law a pair of earrings worth $ 79,500, that’s about Rs. 56 Lakh. The jewels are reportedly absolutely stunning and are designed by well-renowned luxury jewellery designer, Van Cleef & Arpels. These Snowflake earrings, as they’re called, weigh about 6.7 carats and are made up of 170 stones.