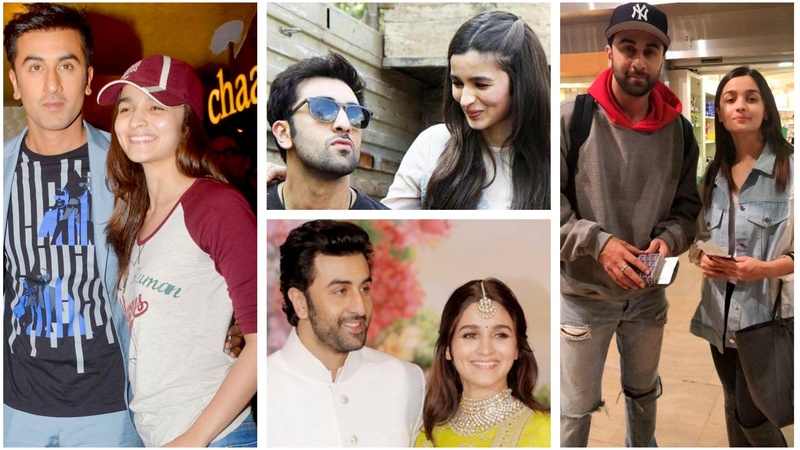 Alia Bhatt and Ranbir Kapoor – B-Town’s newest lovebirds have become everyone’s center of attention, owing to their whirlwind romance. What began on the sets of their upcoming film Brahmastra has turned into a full-fledged romantic affair!

It all began with their joint appearance at #SonamKiShaadi, followed by travelling to work together and then the famous dinner with the Kapoor family. Ranbir, who is usually shy opened up about dating Alia Bhatt. He said,  “It’s really new right now, and I don’t want to overspeak. It needs time to breathe and it needs space. ”

Speculations of @ranbirkapoor dating @aliaabhatt started when they appeared for @sonamkapoor ‘s reception together and now it’s confirmed! The Kapoor star agreed to have falllen in love with Alia since a while now and all we can say is that they form a super cute couple together. . . . #weddingzin #wedding #weddingphoto #weddingplanner #weddingdress #weddinggoals #weddingphotography #weddinginspo #instaphoto #indianbride #instalike #instalove #instawedding #bollywood #sonamkishaadi #aliabhatt #ranbirkapoor #ranbirandalia #couplegoals

Although in a recent interview, the Kapoor boy really stunned his fans, He was quoted saying, “ When I was younger, I used to believe that I’ll get married at the age of 27. I’ll have kids by the time I am 29-30. I’ll have two kids. But life doesn’t go how you plan it. It’s how you and your partner decide that now let’s take it to the next level. And it happens very naturally and organically.” He had also further added saying, “I believe in the institution of marriage. I want my own children, my wife, I want to have my own family. I hope that I’ll have that privilege soon.” I really hope, Alia is listening to this.

What really caused a social media frenzy though is when the Kapoor boy admitted wedding is really on his mind though. In a recent Twitter chat to promote his upcoming film Sanju, Ranbir was asked when he plans to tie the knot and the actor said, “Soon hopefully! :)” Yes, he said that, am really not kidding.

It was not recently that when Alia Bhatt too talker her heart out on the same topic.  “Right now, I am not thinking about getting married. But honestly, I am not someone who thinks about these things. I just go ahead and do them. It could be a very random thing since I consider myself a random person. I am not someone who plans out my life thinking. Well, that’s how it should be done. I feel the best things in life should happen when they are least expected. Maybe, people expect me to get married at 30, but I might surprise myself as well and get married before that.”

Well well, can they please end the suspense and just tell us when they are planning to get married 😀

All the Bollywood stars spotted at Alia Bhatt's cousin Sakshi Bhatt's Wedding Reception! Alia Bhatt’s cousin Sakshi Bhatt hosted a grand reception in Taj Lands, Mumbai which was attended by the who’s who of Bollywood... Jan. 28, 2019 10 times Alia Bhatt gave us major bridesmaids outfits goals! Alia Bhatt has never disappointed me when it comes to giving fashion goals. She’s been upgrading her bridesmaid wardrobe with e... Aug. 4, 2018 Who wore what at the star-studded reception of Mrs. Sonam Kapoor Ahuja! #SonamKiShaadi Sonam Kapoor and Anand Ahuja's reception last night was one hell of an event. It took place at The Leela in Mumbai after their ... May 9, 2018 All the fun exclusive videos from Sonam Kapoor's mehndi and wedding ceremonies! #sonamkishaadi Sonam Kapoor is Mrs. Sonam Kapoor Ahuja now! And while she tied the knot, the entire bollywood was there to congratulate the ma... May 8, 2018 Alia Bhatt's Dilbaro promises to be the wedding bidaai song of 2018! All eyes are set on Alia Bhatt’s latest endeavour this year where she plays a gun-toting, ass-kicking spy/housewife! While the ... April 30, 2018