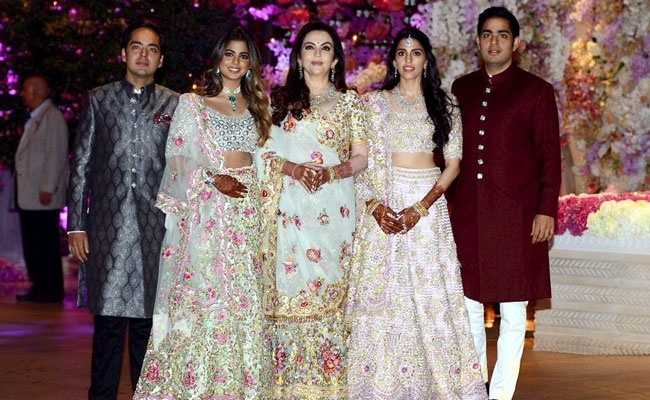 Apart from the huge star-studded guest list, the engagement party also saw a lot of unique trends, have a look –

Some of the best gourmet food was lined up for their dear ones who made a presence at Anitilia. The person in-charge of the food was chef Ritu Dalmia, chef and co- owner of the popular Italian restaurant Diva. She herself prepared the gourmet pizza and served it to the guests.

The food section had three sections which served the cuisines from – Italy, Gujarat and Rajasthan respectively. 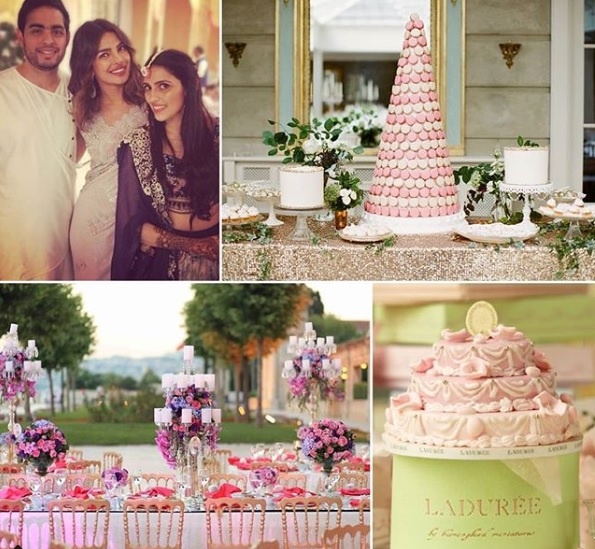 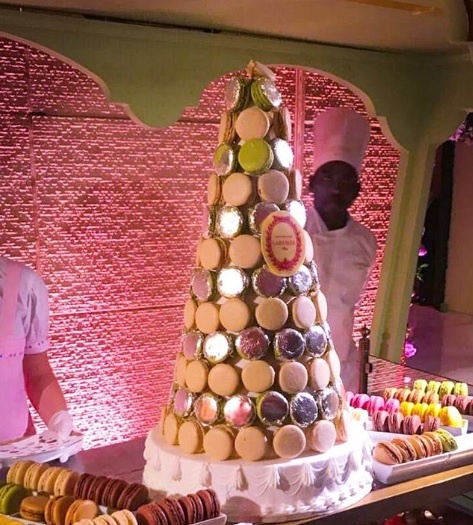 For the dessert, the famous Persian Luxury bakery Laduree set up a separate parlour which displayed some of the best delicacies from all around the world. 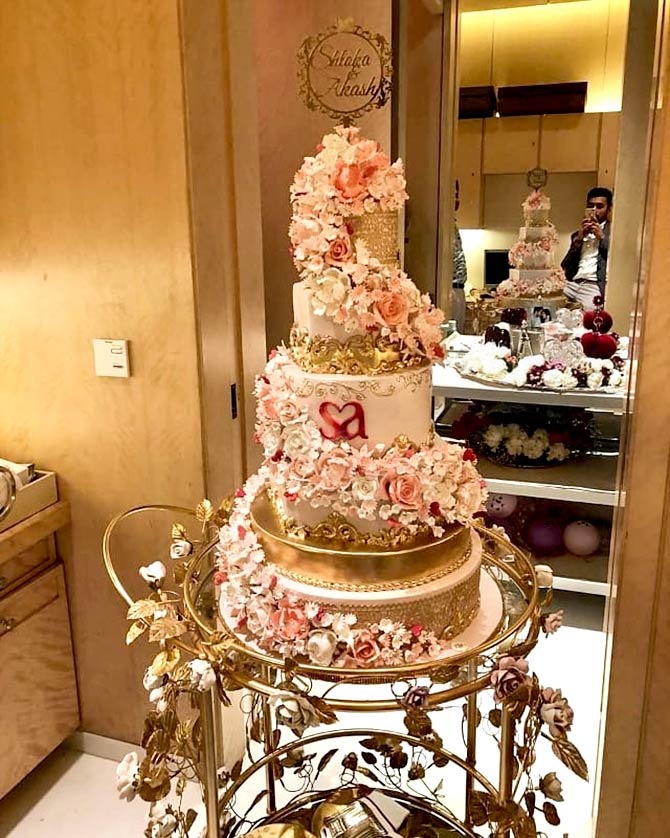 The six tyre cake at the biggest party was designed by a Mumbai based bakery unit, Bunty Mahajan.

Adorned with white and peach flowers, the cake featured layers of white and gold, and almost each tier had intricate work in gold. It was placed on a floral cake stand and had the initials of Akash and Shloka embellished on it. The golden topper had the couple’s name.

The luxury doesn’t just end here. There were no waiters or patrons serving the food to the guest but it was carried and delivered to the guests in floating balloons right at their table. Now, that’s what we call something absolutely spectacular!

The Decor at the Ambani’s receptions was an absolute aw-gazing affair to look at. They opted for the best of the decorators from across the globe. No risks to be taken eh!

Inside Decor of the Ambani’s grand engagement party

The glamorous yet soothing pastel pink floral decor of the grand day, was designed by the Californian floral designer Karen Taren and the wedding planning services of the high profile Seven Steps were called to manage and coordinate the mega event.

Even the invites of the gala event invited a lot of attention and buzz from all around the globe.

It features a video of the couple, Shloka and Akash with a ceremonial music of Shubharambh from the movie Kai po Che being played in the background. The invites were sent off to the guests from the parents Mukesh and Neeta Ambani and the siblings Isha and Aanat Ambani.

Akash was featured in the video, wearing a formal suit while Shloka looked absolutely lovely in a traditional lehenga. Check out the video of it-

The Wedding invite features a white and golden box inside which a slide – out temple with Lord Ganesha in it, is kept. The invite is placed on top of the temple, so that each of it receives direct blessings from the Lord. The invite alone costed a whooping 1.5 lacs each!

The engagement affair in itself created heavy loads of buzz all around the globe. So much so, that we can’t wait to see the grandeur wedding gala of the famous Ambani’s. Something to look forward to, isn’t it?

All the details & pictures from the big fat wedding of Akash Ambani & Shloka Mehta, including who wore what from the Bollywood guest-list! The Ambanis are known to not just set a bar when it comes to big fat Indian weddings, but to take the bar higher with every wed... March 11, 2019 Ahead of the big fat wedding, the Ambanis & Mehtas serve food to 2,000 children celebrating 'Anna Seva'! Ahead of Akash Ambani and Shloka Mehta’s wedding, the Ambanis and Mehtas took part in a very auspicious Anna Seva ceremony last... March 7, 2019 From Coldplay and Chainsmokers performing live, to Alia Bhatt and SRK dancing, here's all that happened at Akash Ambani and Shloka Mehta's sangeet night in Switzerland! Just when I thought the Ambani’s can’t shock us more, they went and proved the world wrong. Right after kick-starting the pre w... Feb. 27, 2019 Beyonce to Perform at Isha Ambani and Anand Piramal's Sangeet Ceremony at Udaipur! Buckle up people, because it’s going to be raining celebrity weddings in the upcoming months! From Ranveer Singh and Deepika Pa... Oct. 23, 2018 All the insider pics & deets from Isha Ambani and Anand Piramal's dreamy engagement at Lake Como! Anand Piramal popped ‘the question’ to Isha Ambani a couple of months ago and she obv said yes in a heartbeat. While not a lot ... Sept. 24, 2018