All you need to know about Sikh Wedding Traditions! 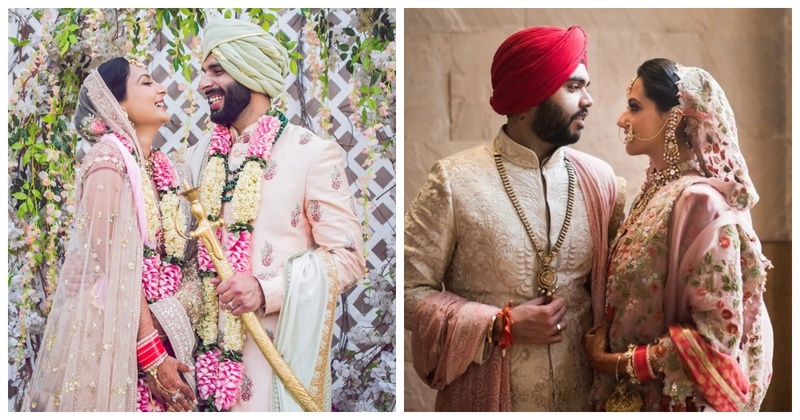 “Oh my god, sikh weddings are the best! Cause waha tha daaru ka fountain hota hai!” Ugghh every time I hear someone say this, my respect for them diminishes. Prah, tenu ki pata Sikh vyaah vich ki honda hai?! Dear people of this world,Sikh weddings are not synonymous with chicken and daaru! Look beyond your Bollywood exposure and take some time to know a little about this beautiful culture.

Let me start your education by teaching you a little something about their wedding rituals and its significance! 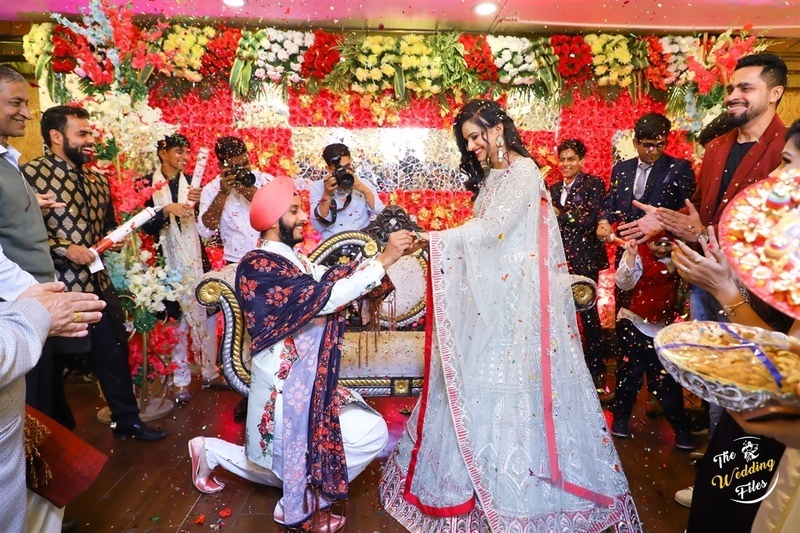 Kurmai is the official engagement! And, if held at a gurudwara, it will be followed by langar. The father of the groom presents him with  a kada, gold ring and some mohre gold coins. These items are then attached to a black thread that the bride wears on special occasions. 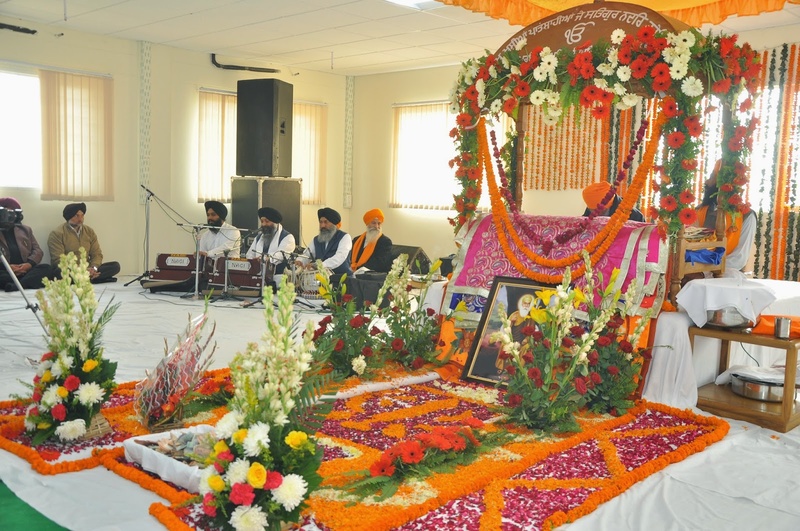 The elders or readers of the family read the entire Guru Granth Sahib within 48 hours. Akhand Path is usually held separately by both the families. The purpose is to recite the teachings of the holy book and lead the bride and groom to live a pious life.

A few days before the wedding the families visit the gurdwara to offer prayers or ardas. A random page from the Guru Granth Sahib is read, recited out loud to spread the teachings of the Guru. Ardas is usually followed by distribution of kada prasad and community lunch also known as langar. For those who don’t know, kada prasad is the best prasad ever! 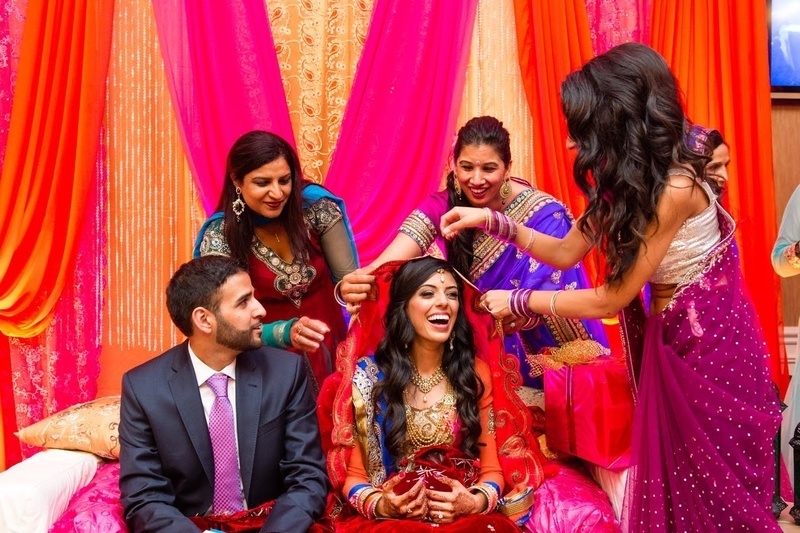 A few days before the wedding, the groom’s family visits the bride and presents her with the wedding lehenga, jewellery and other gifts. The groom’s mother places a chunni on her head (usually red in colour) to signify that she is now an important part of their family.

A sacred red thread is tied on the groom’s right wrist and the bride’s left wrist. It is believed to protect the couple from ill omens. In this ritual, the couple’s respective sister in laws fill a pot with holy water from a nearby well or Gurudwara. This water is considered sacred. The bride and groom bathe with this water after the vatnaa ceremony. 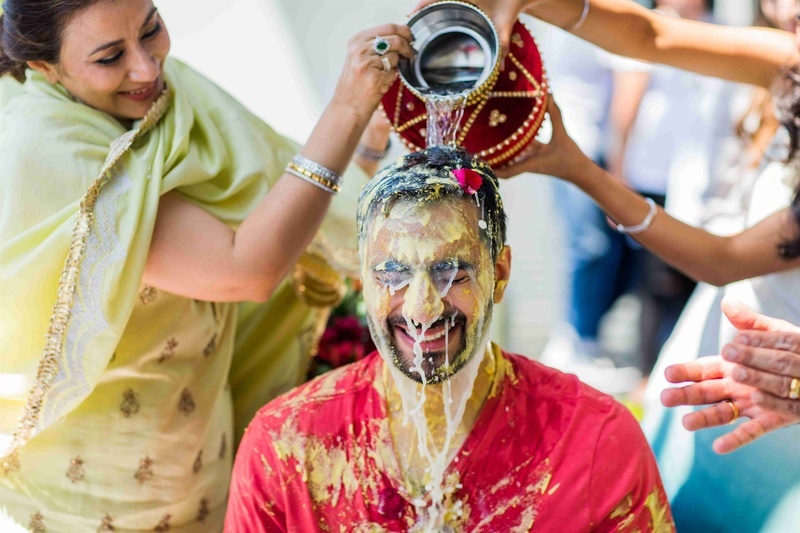 The vatnaa ceremony is very similar to the haldi ceremony. In this, a paste of turmeric, mustard and barley is anointed on the bride and groom. They then take a bath from the water collected in the gharoli ceremony. 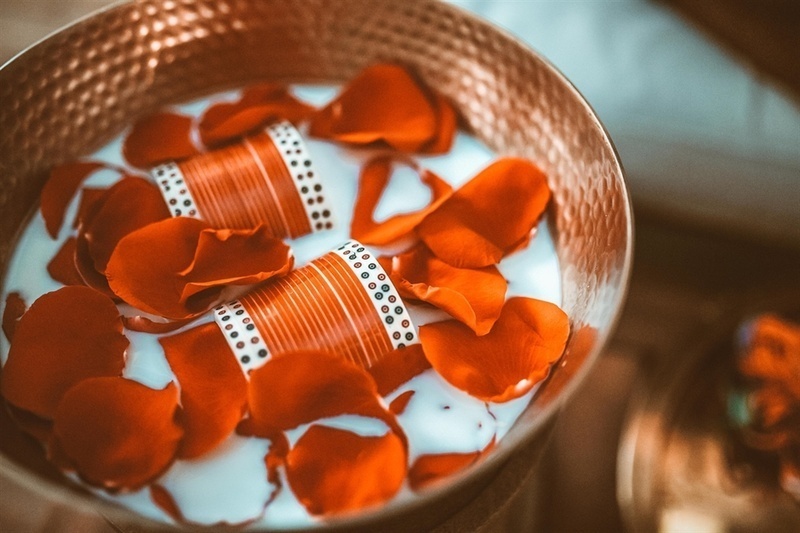 The chuda ceremony is a plethora of emotions in itself. The maternal uncle or mama of the bride presents her with a set of 21 red and white bangles or chuda. The chuda is first washed in milk and rose water and then given to the bride. Once the bride wears it, it is covered by silk cloth. 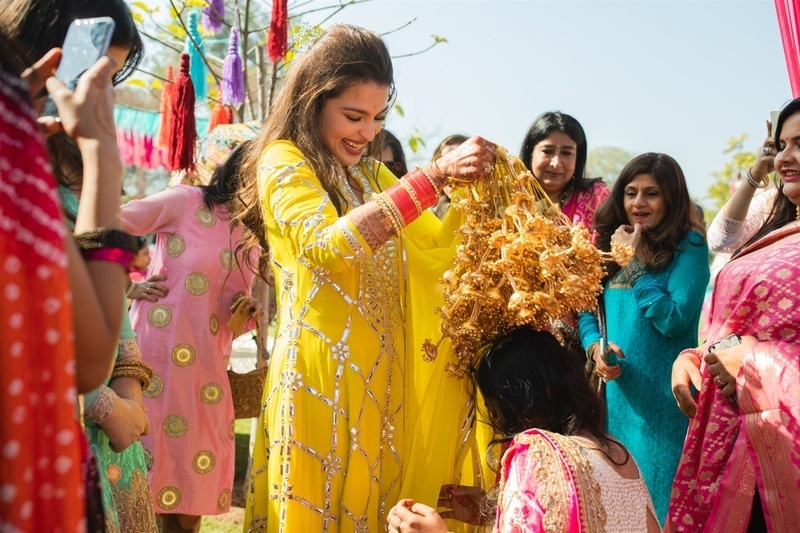 Kaleere need no introduction! The kaleere are attached to the chuda. The bride then shakes her hands above all the unmarried girls. It is believed that if a piece of kaleera falls on a girl’s head, she will be the next one to get married! It is a desi version of throwing the bouquet! 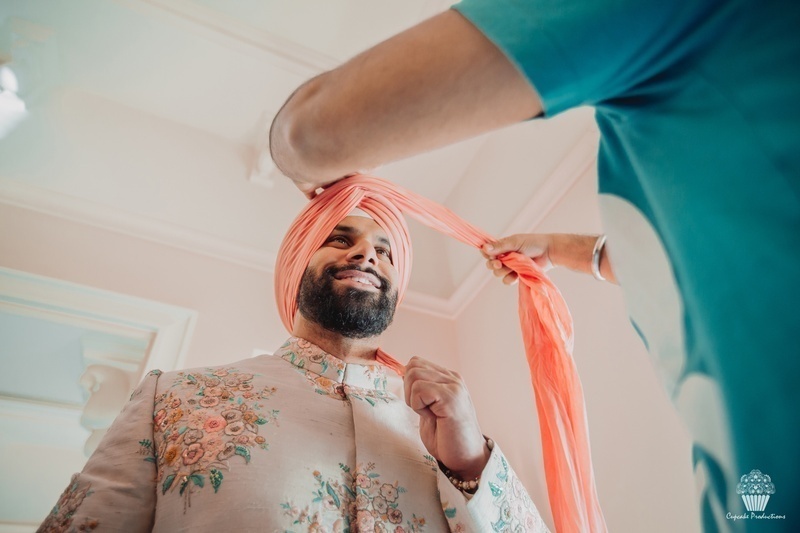 On the day of the wedding the groom’s father ties the turban around his son’s head. Then the sister of the groom ties a sehra or a thread of flowers around the groom’s turban. 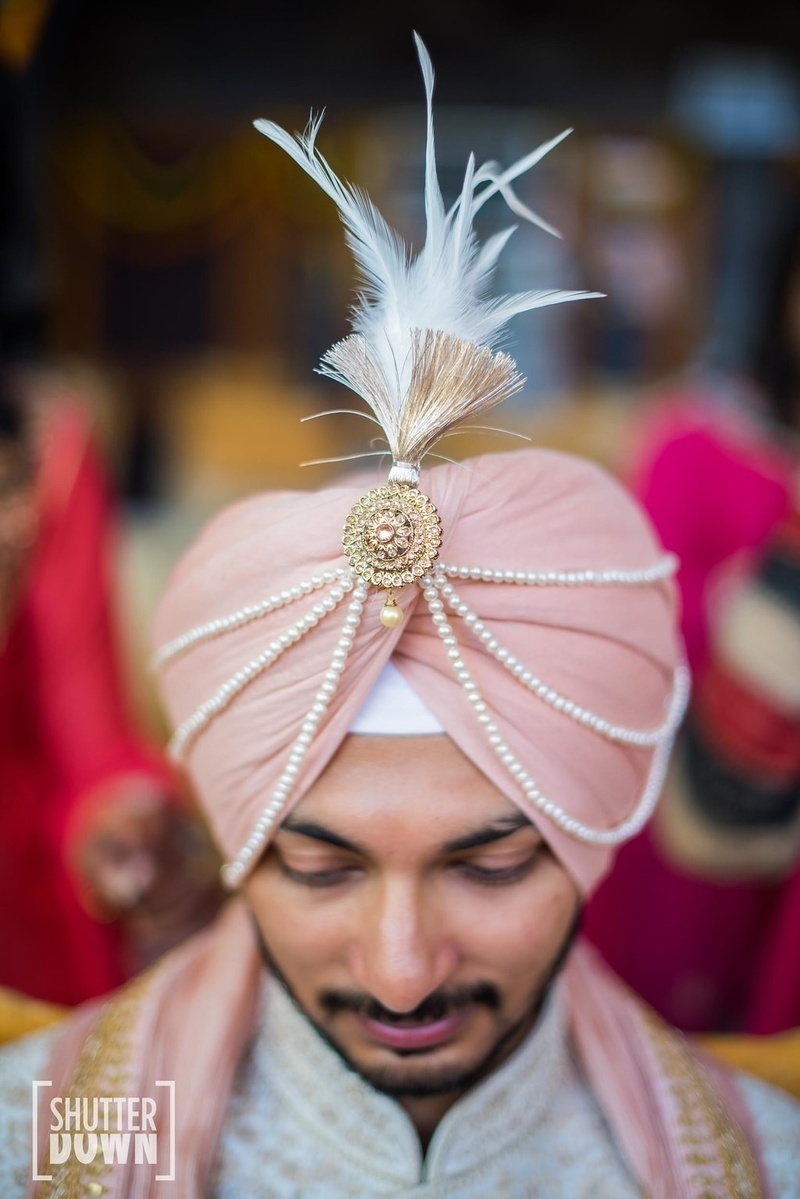 The groom’s sister in law applies surma or kajal on his forehead to ward off the evil eye. The sister of the groom then ties a piece of jewellery to his turban and stands at the door demanding for a gift. The groom can go for his wedding only after gifting something to his sister. 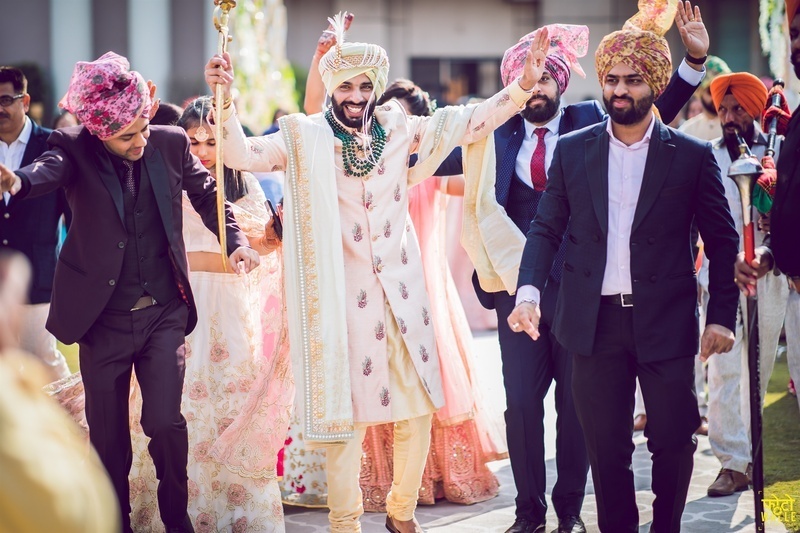 The baraat leaves the groom’s residence to arrive at the bride’s. It is a pompous occasion with baraatis dancing to the beats of dhol. The baraat is welcomed by the bride’s family at the doorstep. Garlands are exchanged as a sign of respect. 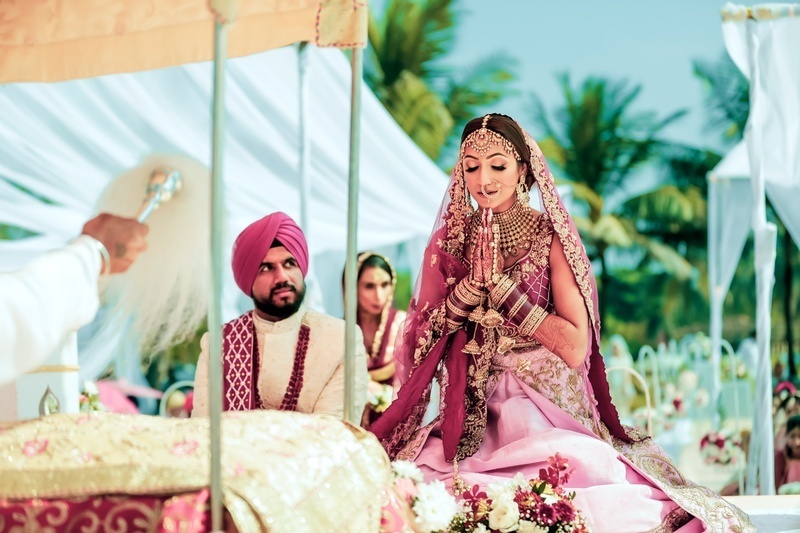 Anand Karaj is the main wedding ceremony held at the Gurdwara. The words anand karaj  translate to ‘blissful union’. The entire wedding is designed around the teachings of Guru Granth Sahib. The families offer Ardaas to Waheguru and the wedding ceremonies follow. The father of the bride places a saffron colored scarf on the groom’s shoulder and the other end of the same on his daughter’s hand for the pheras. 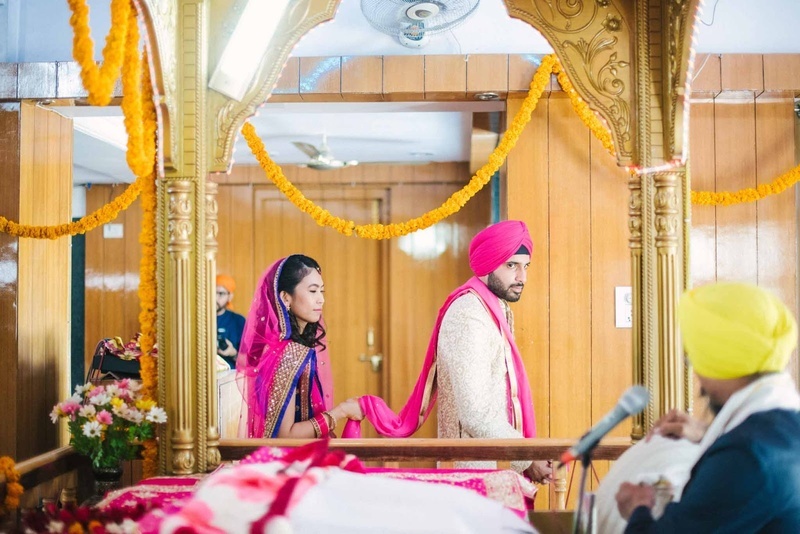 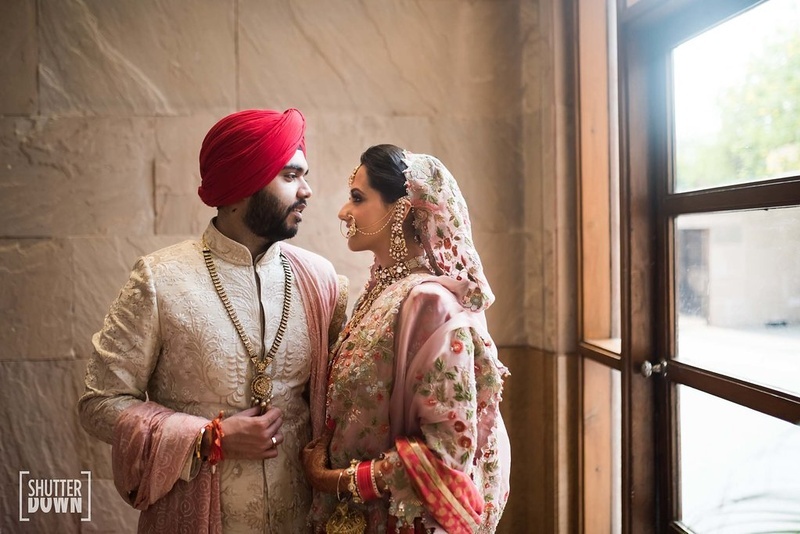 The priest conducting the marriage reads four stanzas or lavaans from the Guru Granth Sahib. After the first stanza, the bride and groom walk in a clockwise direction around the holy book. They don’t sit but stand and take a phera after each laavan. Unlike Hindu ceremonies, Sikh ceremonies have only 4 pheras. 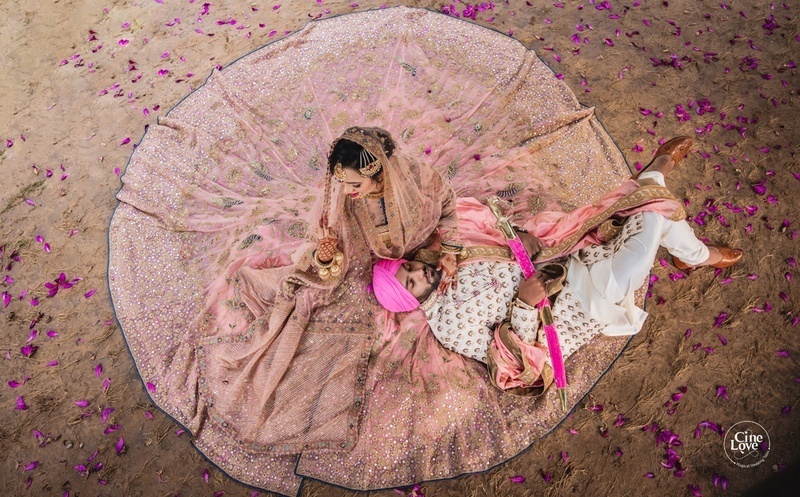 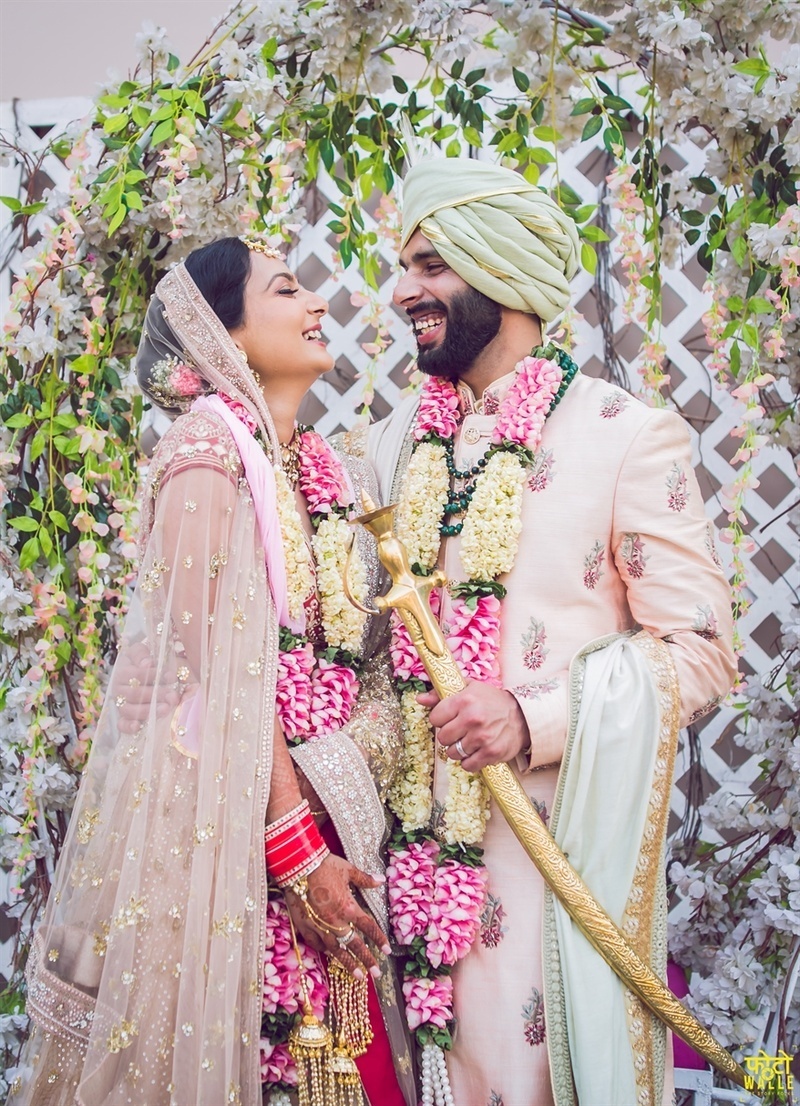 After the laavan pheras are complete, an Ardaas is offered as an indication that the wedding ceremony is now complete. Hymns from Guru Granth Sahib are sung while kada prasad is distributed among the attendees. The wedding is often followed by lunch and/or reception.

If I have missed out any detail in the list, let me know in the comments!

This Gorgeous Sikh Couple gave us #MajorRoyalFeels The last time I gushed about a wedding it was #DeepVeer’s ethereal affair at Lake Como, Italy. As soon as the first set of pict... Nov. 30, 2019 8 Sikh Brides Who gave us Major Maharani Vibes on their D-day Weddings, especially in India, are known for their opulence and extravaganza when it comes to outfits flaunted by brides. Almos... Nov. 6, 2019 10 Beautiful Kerala Wedding Traditions Traditions complete a wedding. They have been passed down from generation to generation and are full of meaning and joy. Let us... Sept. 25, 2019 This Curvy Sikh Bride Flaunted the Prettiest Outfits Busting the myths revolving around the ideal image of what a bride should look like on her D-day, Ishleen Kaur Sethi proved tha... Aug. 19, 2019 8 Amazing Wedding Traditions from Around the World All weddings are unique and special in their own way. Each region and every community has its own set of traditions and customs... Aug. 9, 2019