11 Bengali wedding rituals you should know if you are getting married Bengali style! Bengali wedding rituals are more or less similar to the common Hindu wedding rituals. If you are a Bengali bride-to-be, who wants to know all the Bengali marriage rituals and what they mean, scroll below!

Bor Jatri is basically the baarat, where the groom, his family and friends dress up for the wedding and start their journey to the bride’s house or the wedding venue. This Bengali wedding ritual comes after the bor jatri or the baarat reaches the bride’s place. Normally the bride’s mother along with other family members welcome the groom and his side of the family by doing aarti with the holy lamp and serving the sweets and drinks. In this Bengali marriage ritual, the groom is seated at the chadnatolla, or the wedding mandap, where he is offered new clothes by the person who is to do the sampradaan. This is usually done by an elderly male member of the bride’s family, most commonly the bride’s father or uncle. Saat Paak is that Bengali wedding ritual where the bride sits on a low wooden stool called pidi. This stool is then lifted by her brothers and the bride is taken around the groom in seven circles. This ritual signifies that they are wound up to each other. After saat paak  Bengali marriage ritual, the bride and the groom look at each other in front of guests. The bride removes the betel leaves from the front of her face and looks at the groom. This exchange of loving glance marks the beginning of the couple to be together in witness of their family and friends. Sitting high on the pidi after the shubho drishiti, the bride and the groom exchange garlands of flowers three times. This Bengali wedding ritual marks as the first step of accepting each other as man and wife. Sampradan is basically the equivalent of Kanyadaan in a Hindu wedding ceremony. In the Bengali wedding ritual of Sampradan an elderly male member (almost always, her father)  of the bride’s family gives her hand to the groom, when both their hands are tied by a sacred thread while reciting Vedic chants. 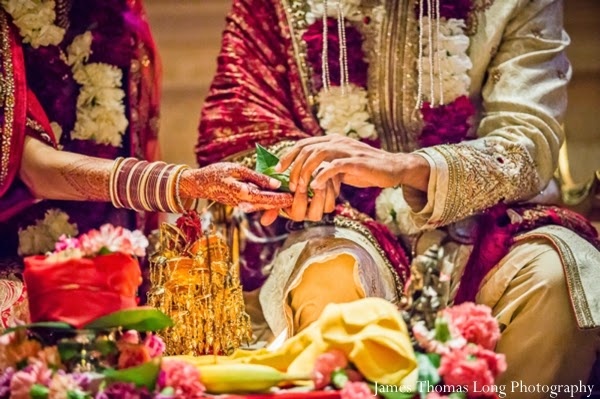 In this Bengali marriage ritual, the bride and groom sit in front of the yagna or the sacred fire and chant mantras after the priest. In this Bengali wedding ritual, the couple takes seven rounds around the fire or the yagna, thereby solemnising their marriage. 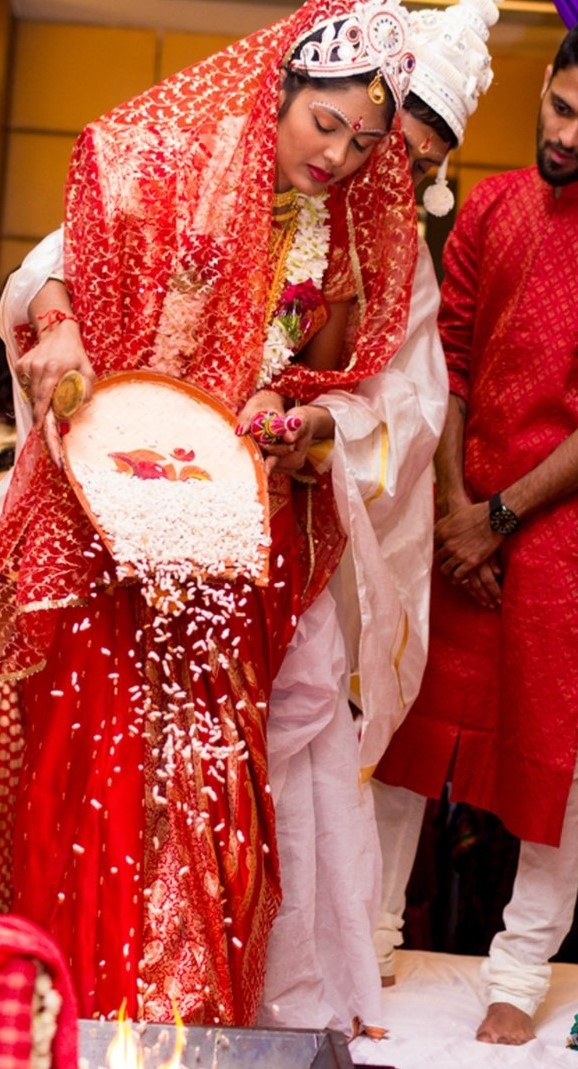 In this last and final Bengali wedding ritual, the groom applies sindoor or vermillion the bride’s hair-parting. Thereafter, the bride is considered as a married woman since applying sindoor is one of the many solah shringas. 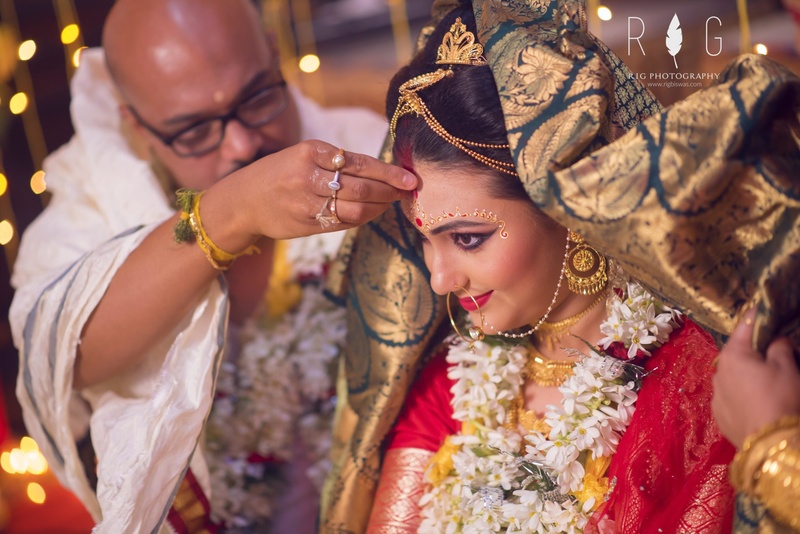 Hope I was able to shed some light on Bengali wedding rituals and how people of the Bengali community in India get married.

Kerala Wedding Sadhya: A Sumptuous and an Elaborate Feast of Sorts A traditional wedding in Kerala is an intimate affair that generally takes place in the morning with simple rituals and a short... Sept. 20, 2019 15 Interesting Wedding Myths and Beliefs Around The World 15 Interesting Wedding Myths And Beliefs Around The World Myths and beliefs have been passed on through generations, be it cult... Aug. 27, 2019 A-Z guide on Punjabi wedding rituals and all you need to know about them! When someone talks about a ‘Punjabi wedding’, the first image which is more likely to pop up in your head is a loud, extravagan... April 26, 2019 The Latest & Prettiest Lehenga Latkan Designs You Need To Keep an Eye on!   When my sister was getting married my mother ran from pillar to post in search of an offbeat lehenga latkan design for her we... Nov. 20, 2018 Deepika Padukone & Ranveer Singh's Sindhi Wedding Ceremony had everything from gorgeous kaleeres to a beautiful bridal entry - here're the Exclusive Pictures! All you DeepVeer fans, their wedding pictures are not ghumshuda  anymore! The memes have already teased us enough, now it is ou... Nov. 20, 2018