Bollywood dulha looks to kill for! 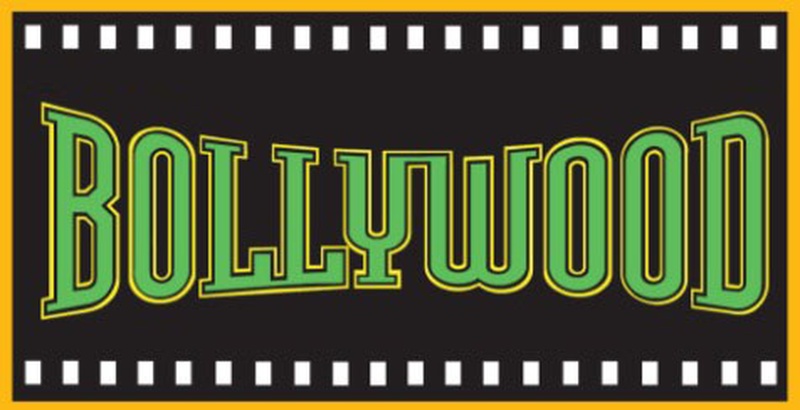 Bollywood knows how to do everything in style. Be it any event, party or wedding, it definitely sets the temperatures soaring and makes fans go weak in their knees! Our Bollywood ‘mundas’ stayed true to their cool image even when it comes to tying the knot. As they took the wedding plunge, they made sure they looked as dapper in real life as they do in reel life! Let’s take a sneak peek into some of the most handsome grooms of Bollywood and their wedding day look.

Marrying one the most beautiful women in the world is no mean feat! Abhishek Bachchan made sure that he complimented his wife’s beautiful wedding attire. He wore a traditional gold sherwani designed by Mumbai-based Kay Sons. The intricate work done on the sherwani was woven by master craftsmen from Varanasi, who have been in this business for 400 years now. His saafa featured a peacock feather along with emerald green jewelry. Since Aishwarya Rai and Abhishek Bachchan are big names in the industry, their union was such that the whole world stood up and took notice. 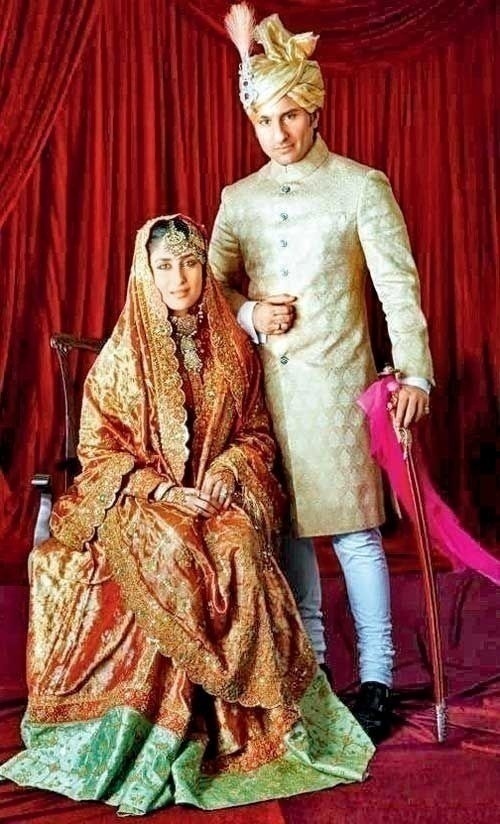 Even though the wedding was a hush-hush affair, the attire worn by Saif became the talk of the town. Saif looked every inch the Nawaab he is, in his lavish gold sherwani with self-embossed prints over it. He paired his churidaar with a beautifully-tied saafa. The kalgi added a touch of elegance to the whole attire. Holding a sword next to him, Saif made sure his ensemble showcased his rich cultural background. 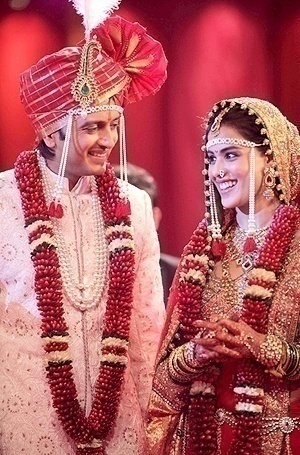 The ‘Lai Bhaari’ actor tied the knot with the beautiful Genelia D’Souza in a traditional Marathi-style wedding. His wedding ensemble emulated his Maharashtrian background as he sported a white zardozi embroidered sherwani with simple, plain white trousers. The cuffs of the sherwani had elaborate floral motifs and his bright red ‘pheta’ complemented the whole attire. 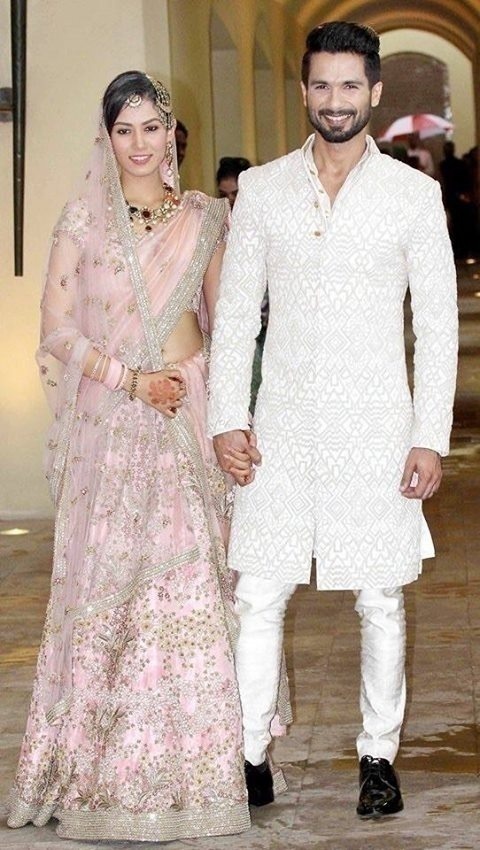 Shahid – Mira Kapoor’s wedding was the event of the year, with the whole town talking about it. What will he wear on his wedding day? Who’s going to be the designer? These were questions everyone had been asking. And when the wedding day arrived, he did not disappoint the media and fans. Shahid’s close friend and designer, Kunal Rawal, was in charge of his look for his big day and made sure that the attire worn by the couple on their wedding day reflected the love they share. Shahid Kapoor looked dashing in a cream sherwani, which beautifully complimented the blush pink lehenga worn by his gorgeous bride, Mira. For his reception night, Shahid Kapoor chose a black bandhgala coat in sync with Mira’s attire for the night. His choice of outfit for the night reflected his striking features and good looks. 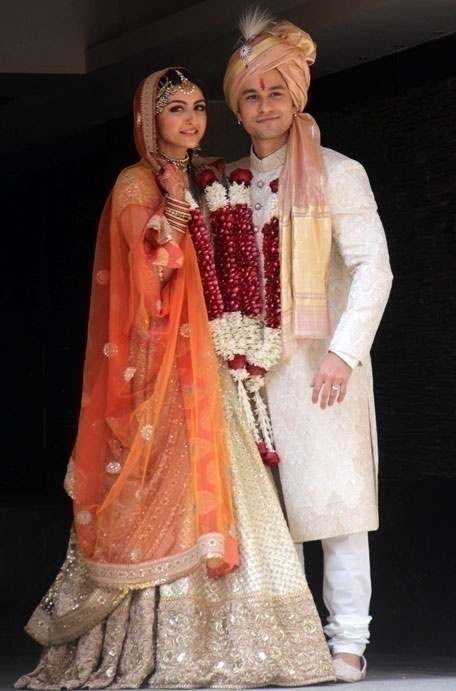 Kunal Khemu’s wedding to Soha Ali Khan was nothing short of grand. His wedding outfit complimented Soha Ali Khan’s look. He wore a beige bandgala and teamed it with a white churidaar and mojris. The flowy silk saafa made him look every bit of the royal family he’s a part of. For the reception party, Kunal kept the look casual yet elegant with a sky blue kurta, teamed with a black Nehru jacket and a pink pocket square. In every way, Kunal Khemu made sure he’s the perfect match for Soha Ali Khan. 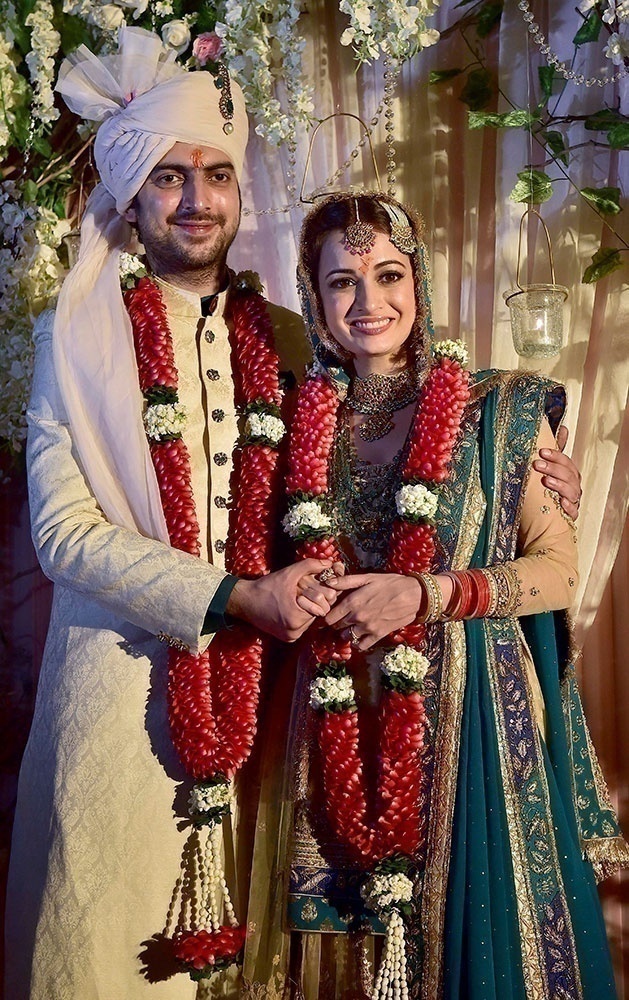 Well, his connection to Bollywood is through his wife, the former Miss. Asia Pacific, Dia Mirza. But the groom looked extremely dapper on his wedding day in a classy gold on white sherwani and green kurta. A small green pocket square adds a pop of colour. A white saafa with a kalgi just completed the whole look perfectly. 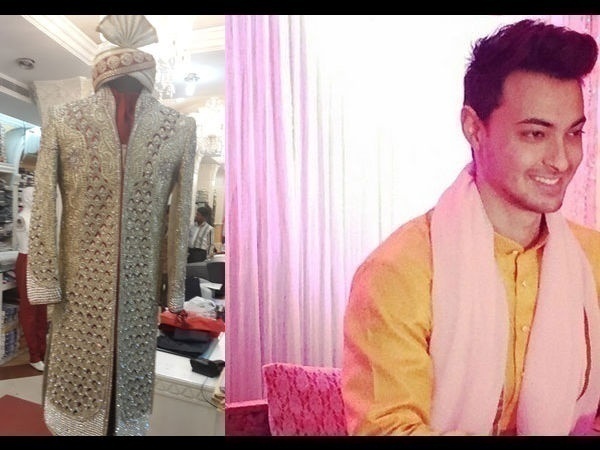 The Arpita Khan- Aayush Sharma wedding was the highlight of the season. Being Salman Khan’s brother in law automatically brings you into the spotlight, and Aayush Sharma made sure he looked immaculate and sophisticated! His sherwani was specially designed by Hyderabadi Makhdoom Brothers. The sherwani was made out of ‘jamwar’, a special cloth and was studded with beautiful Swarovski crystal beads. For the reception party, he looked handsome in a velvet maroon bandgala outfit.

While all the Bollywood weddings were more about bling and embellished sherwanis, Imran Khan preferred keeping his wedding look minimalistic. He wore a black bandgala and paired it with trousers. His look was suave, neat and quite refreshing.

So, gone are the days when grooms faced problems due to the lack of options. Now, there are plenty of Bollywood inspirations the would-be grooms could use for their big day. If you want to keep up with the latest trends of ‘what’s in and what’s not’, you should take the cue from our Bollywood dulhas. They took the celebratory plunge in style and made all the girls swoon over their breathtaking looks.

5 Iconic Looks of Kajol from her Movies Earlier this week, Kajol celebrated her 45th birthday. Blunt, bright-eyed and brilliant, she has been a prominent personality e... Aug. 10, 2019 Your Complete Guide to Choosing the Best Bridal Lehengas for Your D-day! Every aspect of an Indian bridal avatar celebrates colour, culture, legacy and zest. Such is the level of excitement and thrill... Dec. 1, 2020 20 Reception Sarees for Bride Ideas to Bookmark in 2020 Sarees are considered to be the highlight of Indian wear and they sure have come a long way, making it through from one generat... Oct. 15, 2020 25 Latest Sherwani Suit Designs for Grooms-to-be No groom's wardrobe or wedding dress for men's list can be complete without a stellar sherwani! This single gem of an outfit ha... Sept. 27, 2020 25 Sexy Bridal Blouse Designs to Bookmark this Wedding Season Bridal blouse designs have a special place in my heart if you ask me. This is because these blouse designs or lehenga blouse de... Aug. 31, 2020