Here’s What Our Favourite Bollywood Celebs Wore To The Cannes Festival 2017. #WeddingFashionInspiration 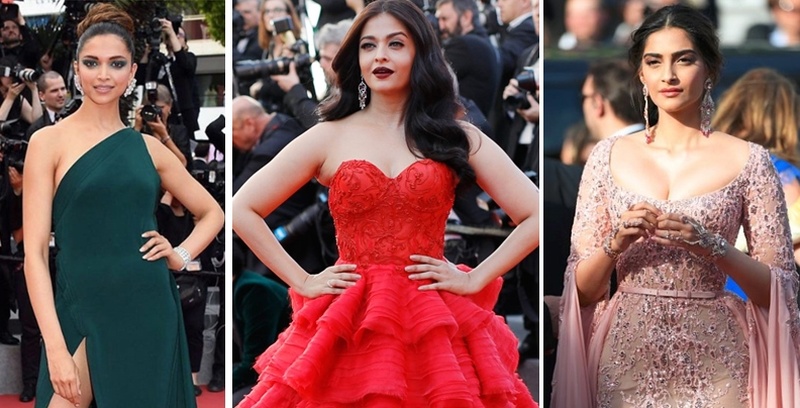 We’re all aware of The Cannes Film Festival and our beautiful Bollywood celebs rocking the red carpet each year. It’s that time of the year again and it certainly didn’t disappoint.
From Ash to DP to Sonam, each one of these ladies who represent L’oreal at The 70th Cannes Festival looked just about drop-dead gorgeous as they walked the famed red carpet.

Deepika opened for L’oreal, walking the carpet on the first day of the Cannes festival. She turned heads in a deep-purple sheer gown by Marchesa paired with De Grisogono jewellery and Jimmy Choo heels. Her hair was styled in casual, beachy waves.

Her Day 2 look was a complete contrast to the first as she chose to wear a bottle green gown by Brandon Maxwell with a sexy thigh-high slit that complimented her frame. She accessorised with diamonds by De Grisogono and Chloe Gosselin footwear. Her hair was styled in a classy high updo. What was equally as stunning as the gown was her statement green smokey eyeshadow.

The second star to represent L’oreal was Aishwarya. She first made her appearance at the festival on Day 3 in a pale blue princessy ball gown by Filipino designer Michael Cinco that would’ve made both Cinderella and Elsa jealous. She paired it with footwear by Salvatore Ferragamo and jewellery by Boucheron. Her hair was left loose in a sleek mid-parting.

Her look for Day 4 stole the spotlight too, as she broke the unwritten red-carpet rules and wore red-on-red.  But nobody really gave her any shade for wearing red on the red carpet because she looked super-stunning and pulled it off beautifully. She chose an off-shoulder gown with a corset-fitted bodice and a magnitude of ruffles that ended in a train.

Day 5 had Sonam Kapoor, our 3rd L’oreal brand ambassador show up in a soft pink Elie Saab dress that was delicate and dramatic all at the same time. The deep and wide boat neck, and the figure-hugging silhouette of the front accentuated her curves while the flared back fell like a graceful waterfall. She accessorized with jewellery by Kalyan Jewellers.

On Day 6 of the Cannes Festival, Sonam graced us with her sparkly presence in another Elie Saab work of art. The golden gown had a plunging neckline and a sleek gold belt that cinched the waist. The look was complimented with gold eye make-up, nude lips and a single Chopard ring.

Apart these three stunning brand ambassadors of L’oreal we also saw a few other stars on the red carpet.

Shruti, who attended the festival for her film Sangamithra, made her debut on the Cannes red carpet in an edgy, black Avaro Figlio number which she paired golden Louboutins and light make-up.
Her second appearance on the carpet was in another black outfit; this one being an Abu Jani and Sandeep Khosla saree that she paired with a gold blouse with 3D floral motifs. Golden studs by Anomaly and a black-and-gold ring by Misho designs were her accessories. Winged eyeliner and soft lips completed her look.

Amy attended the Cannes Festival 2017 representing her movie ‘Boogie Man’. Her first look was a Georges Hobeika gown with a pair of earrings and a sleek, neat bun.

Her last appearance had her looking stunning in a white Versace piece with well-placed slits. Her black heels by Aquazzura and silver Swarovski clutch, along with a bright red lip wrapped up her look perfectly.

This red-carpet regular attended the Cannes festival in a muted-peach off-shoulder gown by Georges Hobeika with floral surface ornamentation. Her make-up by Dior was highlighted with a pop of cherry lipstick. Jewellery by Messika completed the outfit.

5 Blouse Designs From Priyanka Chopra That Give Us Major Fashion Goals So Priyanka Chopra may have gone international but she still looks hella good in a desi saree. We spotted some of her recent bl... July 13, 2017 5 Real Brides and Their Glittering Gold Lehengas That Set Some Serious Bridal Goals! #GoldLehengaTrend Swati’s gold lehenga by Sabyasachi with a maroon statement border that has heavy zardozi embroidery. Paired with matching diamo... June 3, 2017 10 Off-Beat Songs from the 90s for a Kick-Ass Sangeet Night! Right after giving out your “Save the Date” cards, it is an unsaid rule for your besties to religiously start searching for the... May 23, 2017 10 Foods You Must Avoid Before The Wedding. #LehengaWorthyWaist #SayNoToBloating 1. Any Beans No surprise here, everyone knows that beans cause gas and bloating. So avoid that plate of rajma chawal and go for... May 22, 2017 10+ Adorably Relatable Comics That Capture The Little Things About Love SERIES 1 Bangkok based artist Tuna Dunn illustrated a series of cute comics that show what it is like to be in love. Over-the-t... May 19, 2017