Clean Bowled: Cricketers Who Got Hitched This Year! Ask any person about the national sport of India and most of them would say cricket instead of hockey (isn’t that strange?). That’s how important cricket is for the people of this country. Cricket isn’t just a game here, it’s a religion!

Everyone wants to know where they go, what they eat, what they do when not playing cricket and who are they dating. So, when a cricketer gets wed, how can it not be ‘news’? Even though these players make sure that they keep their fans in the loop through various social media platforms like Twitter, Facebook, Instagram, cricket lovers just don’t seem to get enough of them. Here are some cricketers who have always had a way with the bat but lost their hearts to these women who made them go weak at their knees.

Let’s take a look at some of the most charming cricketers who got married this year. 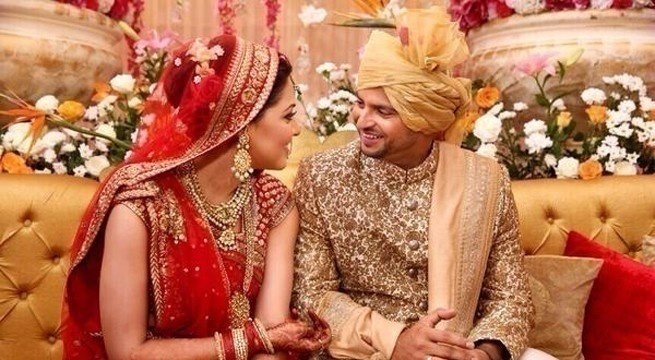 One of the most eligible bachelors of the cricketing world tied the knot this year amidst much fanfare. The star batsman lost his heart to his childhood friend, Priyanka Chaudhary and the couple tied the knot in April this year. The families have known each other since years and used to be neighbours during their childhood days. Over the years, both of them got busy with their lives with Priyanka working for a bank in Netherlands and Raina becoming a world-class cricketer. The couple got engaged at the cricketer’s residence in Ghaziabad. The wedding was a grand affair held at the Leela Palace in Delhi and attended by the who’s who of Bollywood and the cricketing world. The wedding outfits were designed by Sabhyasachi. While Raina looked dapper in a gold sherwani, Priyanka flaunted a gorgeous red lehenga choli. 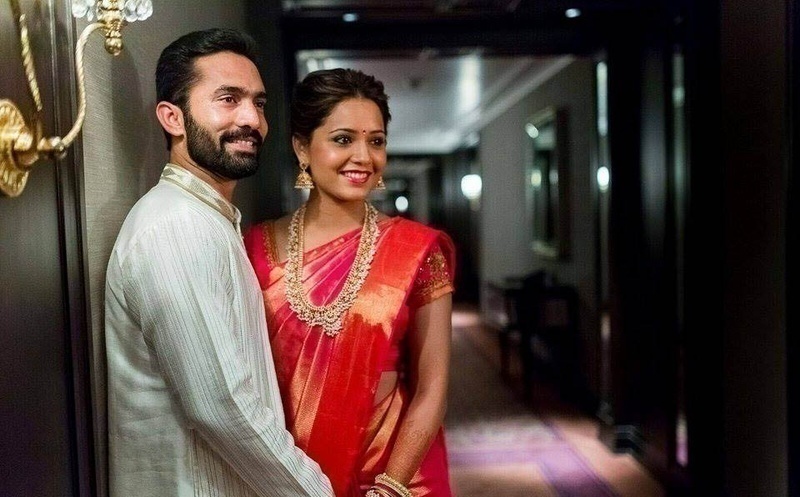 The union of two popular sportspeople was a grand affair! The nation and the media went into a frenzy when the news of an impending wedding between Dinesh Karthik and Dipika Pallikal was announced. Cupid struck when both were in England for professional commitments. One fine day, Dinesh Karthik travelled all the way to meet Dipika, and they hit it off instantly. The couple got engaged in two ceremonies as Dipika belongs to a Christian community and Dinesh is a Hindu. While Dipika wore a traditional red saree for the Hindu engagement, she donned a cream-coloured saree designed by Ritu Kumar for the Christian ceremony. Dinesh Kartik wore a blue Nehru jacket on a cream kurta and a white pajama for both ceremonies. The couple got married in a Christian wedding with the bride wearing a beautiful Reem Acra gown with Swarovski crystals while the groom opted for a jet black tuxedo. For the Hindu wedding, she wore a yellow saree with a red border along with a beautiful neckpiece, bangles and maangtika. Dinesh Karthik chose a cream sherwani with a traditional dhoti and saafa. She opted for an outfit designed by Anushree Reddy for her reception. The wedding between Indian team’s famous spinner and the Bollywood actress was the talk of the town. The pre-wedding and other functions were an elaborate affair with guests from the cricketing world, Bollywood and other politicians in attendance. The couple had a lavish sangeet, mehendi, chuda function, wedding ceremony and reception party. They entered the matrimonial bond at a gurdwara in Jalandhar in the presence of close family and friends while the reception was a grand affair at Taj Palace in New Delhi. With cricketers like Yuvraj Singh and Robin Uthappa among a few getting engaged this year, we can surely expect a couple of grand weddings lining up for 2016! We hope that the list is longer, and we get the opportunity to give you an exclusive coverage on the functions.

Celebrate a Glam Wedding Day with Kalki’s New Shimmer Collection Indian weddings are grand, they are spectacular and more so they are full of glitz and glams. We literally have a million thing... March 1, 2021 Dia Mirza and Vaibhav Rekhi Tied The Knot in a Surreal Wedding Ceremony! “Love doesn't make the world go 'round. Love is what makes the ride worthwhile.” ~ Franklin P. Jones While Dia tried her bes... March 1, 2021 An Incredible Indo-Serbian Wedding- Ansh &amp; Slobodanka  ‘When love knocked on the doors of a lovely Indo-Serbian couple, they knew it was for a lifetime.’ “Being deeply loved... Dec. 15, 2020 Aishwarya and Himanshu Thailand Destination Wedding ‘When childhood lovers turned life partners in a beautiful home wedding set-up’ “The future for me is already a thing of the... Dec. 15, 2020 Jasnoor and Rakesh Lovely Ludhiana Wedding “Love is a friendship that has caught fire.” – Ann Landers ‘When colleagues turned friends and finally lovers, a cross-cultural... Dec. 1, 2020