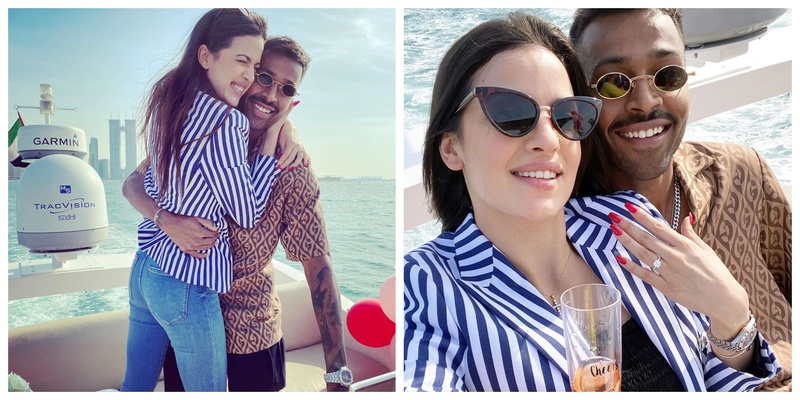 The first Celebrity Proposal of 2020 has happened! (Screams in excitement)

The proposal took place while on a private yacht in Dubai. Natasa and Hardik Pandya were seen spending quality time with their close buddies, who also sang a romantic Bollywood song for the lovebirds- “Sun mere Humsafar”, from the movie Badrinath ki Dulhaniya.

In another video, Hardik went down on his knees and proposed to his lady love. Natasa said ‘YES’ in a jiffy and she was seen blushing with happiness and excitement. After making her wear the ring the duo sealed their engagement with a kiss. The couple was then seen cutting a gorgeous proposal cake!

Millennial couples are also known to have raised their proposal bar by doing cutesy proposal these days- from proposing amidst a dessert to arranging for a flash mob and from proposing in a music concert to setting up a teepee at a picturesque location.

Here are some snippets from the magical proposal:

Natasa Stankovic made her debut in Bollywood with Prakash Jha’s Satyagraha. Subsequently, she has appeared in a few Hindi movies like FryDay, Fukrey Returns, Daddy and more. She has also been seen in the 8th season of the famous Indian television reality show, Bigg Boss.

Meanwhile, Pandya has been recovering from an injury, that also has kept him away from International cricket scene for a few months.

Heis expected to make a comeback in the Indian cricket team during the second half of the New Zealand tour. He has been posting pictures of him training hard for his comeback.

I wish the couple all the best for their future together and a huge ‘Thank you’ from me for making New Years EXTRA SPECIAL for all of us!

A Grand Celebrity Intimate Wedding Amidst Lockdown: Actor Nithiin Weds Shalini Kandukuri Since the news of Telegu actor Nithiin’s wedding hit the headlines, fans and eager beavers alike have been looking forward to g... July 27, 2020 An Intimate Lockdown Celebrity Ring Ceremony: Actor Nithiin Gets Engaged to Shalini Kandukuri A wedding has to be a grand celebration or nothing, right? Wrong. The four-month-long lockdown has taught us different and how!... July 24, 2020 Gurpreet and Shiv Chandigarh Wedding When the Universe planned to unite two strangers, eternal love bloomed! How They Met  They were establishing their f... July 20, 2020 This Crazy Couple Street Dancing is Pure Lockdown Wedding Goals! New-York Times bestselling author Elaine Welteroth got hitched to her long-time beau and musician Jonathan Singletary in a cand... June 5, 2020 6 Indian Indie Qurantunes to Hear when Missing your Special One this Lockdown! Though these times are unprecedented, the idea of ‘longing in love’ is not new. On the contrary it happens to be one of the mos... May 31, 2020