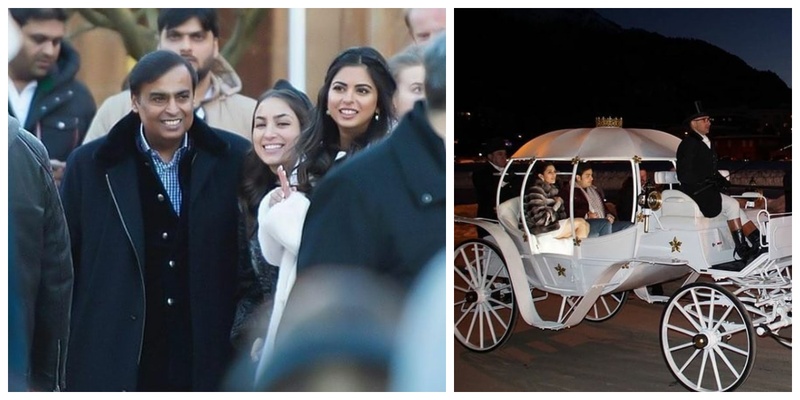 Ambanis do everything kingstyle, so when it comes to Akash Ambani’s wedding festivities, they definitely didn’t hold anything back. They already kicked off the wedding festivities with a grand dandiya night at their residence Antilia last week and it was obviously an affair to remember. And now the whole fam-jam is in St Moritz, Switzerland for two-day pre-wedding festivities of the couple.

According to sources, St Moritz will be hosting the who’s who of Bollywood and business world to celebrate the coming together of Ambani and Mehta families. Karan Johar and Ranbir Kapoor were the first ones to have flown down as they are extremely close to the groom-to-be, while Priyanka Chopra seemed to have landed later to join in on the festivities.

The family is reported to be staying in, one of the most expensive resort of St Moritz – Badrutt Palace. The luxury hotel has the view of the Alps on one side and Lake Saint Moritz on the other. And if you are wondering what would the cost of staying there, then here it goes (hold your breath) – the lowest grade room there costs about Rs 98,500 while the most expensive room costs about Rs 3,09,000 for this weekend. And the Ambanis have the whole hotel booked for the family and their guests.

The theme of the festivities on Sunday February 24th was ‘Winter Wonderland’ which was a fair with rides including Ferris Wheel, Bumper Car, a spiral slide and a carousel.

There was also a Peter Pan Ice Show expected which was rumoured to be followed by a never-seen-before drone show. The carnival is expected to have continued on Monday too after which the wedding party will be heading back home to Mumbai where the Ambanis will host a three-day wedding party.

Well well, I literally can’t wait to see what the Ambanis have in store for the Akash-Shloka wedding!

12 Pictures Every Bride Must Have in her Wedding Album   “Din shagna da chadheya aao sakhiyon ni vehra sajeya haan…”   Brides-to-be, I am sure y’all must have imagined yourself walki... July 29, 2019 6 Reasons Why a Pre-Wedding Shoot is Necessary   Whether you are posing on a snow-capped mountains or chilling in your pyjamas binging on pizzas, when it comes to pre-wedding... June 25, 2019 This pilot couple got their pre-wedding shoot in their respective uniforms and I am totally in love with it!   You might have heard the saying “gotta love a man in uniform” right? Well here’s saying, “gotta love this couple in a uniform... May 10, 2019 Top 10 Fashion moments from Akash Ambani and Shloka Mehta's Wedding! #WzFavourites Akash Ambani and Shloka Mehta’s wedding was and will be the talk of the town for years to come from now, and there are no secon... March 12, 2019 All the deets & pics from the star-studded reception of Akash Ambani and Shloka Mehta! After the big fat wedding of Akash Ambani and Shloka Mehta at Jio world Centre, Mukesh Ambani hosted an extravagant reception f... March 11, 2019