From the celebrity guestlist to inside scoop – here’s all the exclusive deets on the big-fat #Nickyanka Wedding! Nick Jonas and Priyanka Chopra have ARRIVED. The couple just touched down in Jodhpur, where they’re getting married this weekend and looked insanely glamorous and much-in-love. They are all set to tie the knot in a Christian ceremony on December 2, followed by a Hindu wedding ceremony in the later part of the day. According to a report in DNA – their mehendi and sangeet ceremonies will be organised tonite. This will be followed by a haldi ceremony on tomorrow and a cocktail party later in the night. 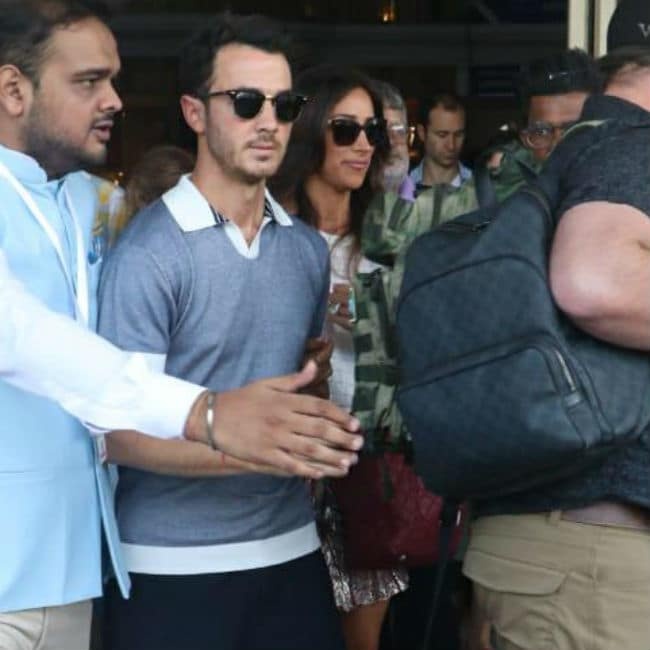 Several other aunts, cousins and relatives also reached Jodhpur ahead of the pre-wedding celebrations. The bride-to-be’s best pals Mubina Rattonsey and Anjula Acharia, are also a part of the event.

According to the reports, security at the hotel has been majorly ramped up ahead of the wedding—with the staff restricted from using their cell phones in order to prevent photos from being leaked.

One outlet even reports that “jammers” are being installed to block cell signals during the ceremonies themselves—just to be extra careful. Dang!

Soon after Priyanka and Nick’s arrival, Shibani Dandekar and Karan Kundra and singer Ganesh Hegde were also spotted at the Jodhpur airport. A source has confirmed that Priyanka’s Baywatch co-star Dwayne Johnson is one of the confirmed guests on the lists. It is to be noted, The Rock had also worked with Nick in Jumanji and therefore, is expected to not give this royal wedding a miss.

Among the Bollywood celebs, Arpita Khan Sharma who also attended Priyanka’s post engagement party is also expected to fly to Jodhpur for her friend’s wedding. Alia Bhatt has also been a regular at Priyanka’s parties and was there at her post engagement party and the recent pre-wedding party she hosted days before flying to Jodhpur. She is also expected to be a part of her big royal wedding.

Yeh Rishta Kya Kehlata Hai Fame Mohena Ties the Knot in Royal Style! Mohena Kumari Singh, is quite the popular face on Indian television thanks to Yeh Rishta Kya Kehlata Hai and that’s not it – th... Oct. 16, 2019 Se Remarier: Justin Bieber and Hailey Baldwin Blockbuster celebrity weddings have become quite a rage these days. All of us remember Priyanka Chopra and Nick Jonas’ opulent ... Oct. 10, 2019 TV Sensation Lovey Sasan and Koushik Krishnamurthy's Wedding Pictures are too cute to handle! It’s already raining celebrity weddings in 2019 too! Just after Prateik Babbar tying the knot with his girlfriend and Sheena Ba... Feb. 21, 2019 All the deets and pics from Neeti Mohan and Nihar Pandya's mehendi ceremony! Remember the bridesmaids shoot Neeti Mohan had with her sisters that had gone viral? Yes yes, the same one where she posed in s... Feb. 18, 2019 Rajinikanth's youngest daughter, Soundarya just got hitched and you've got to check out the pictures! Rajinikanth’s youngest daughter Soundarya tied the knot to actor-businessman Vishagan Vanangamudi at the Leela Palace Hotel in ... Feb. 13, 2019