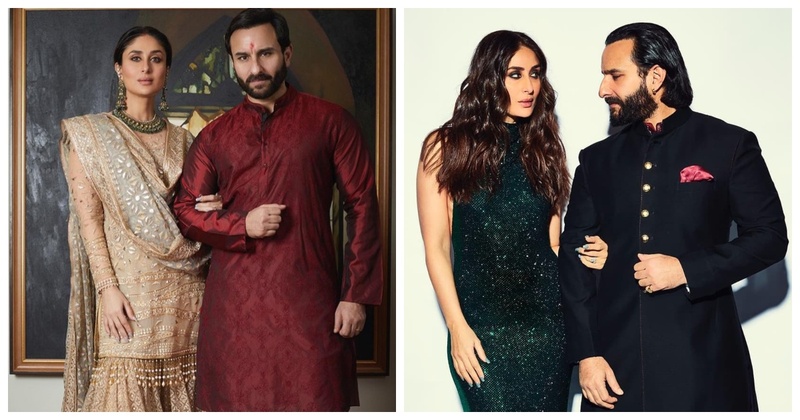 In 2007 when Tashan was tanking at the box office, love was blossoming between two of its protagonists. It’s been 7 years since Kareena Kapoor and Saif Ali Khan tied the knot and they’ve been setting goals ever since! They never fail to amaze us with their romantic gestures and drool-worthy pictures. What else can you expect when you bring Poo and Sameer together? Fireworks, of course! On the occasion of their 7th anniversary, let’s revisit some of their best dressed moments (reviewed by your in-house critic, obviously!)

1. Kareena wore her mother-in-law’s wedding lehenga and looked nothing less than the queen herself!

3. The couple rang in the new year in looking like a total bomb!

5. For Sonam’s reception, they balanced each other like Yin and Yang

6. For Sonam Kapoor’s wedding they turned up in pretty pastel hues- surely the colours agree with them!

7. A couple who never disappoints – the Nawab and his begum!

Happy Anniversary, Saif and Bebo! Thanks for blessing our social media with a fluff ball like Taimur.

5 Brides Who Borrowed Something from their Mum's Closet Since I was a tiny chub ball, I have been obsessed with my mum’s wardrobe (more than I was obsessed with her.) I wanted everyth... Oct. 17, 2019 Anita Dongre's Winter Velvet Collection has Our Attention! In India, it is peak wedding season in the months of November-January. And barring Bombay, it is really cold during those month... Oct. 17, 2019 5 Delhi-based Incredible Makeup Artists to Consider for Your Wedding Every smart bride knows the importance of makeup on her wedding day. It has to be flawless, in tandem with the bridal lehenga a... Oct. 17, 2019 Yeh Rishta Kya Kehlata Hai Fame Mohena Ties the Knot in Royal Style! Mohena Kumari Singh, is quite the popular face on Indian television thanks to Yeh Rishta Kya Kehlata Hai and that’s not it - th... Oct. 16, 2019 12 Cake Designs For The Modern Couple The wedding cake is the centerpiece of the reception hall. It must be a perfect masterpiece made for the lucky couple. We picke... Oct. 16, 2019