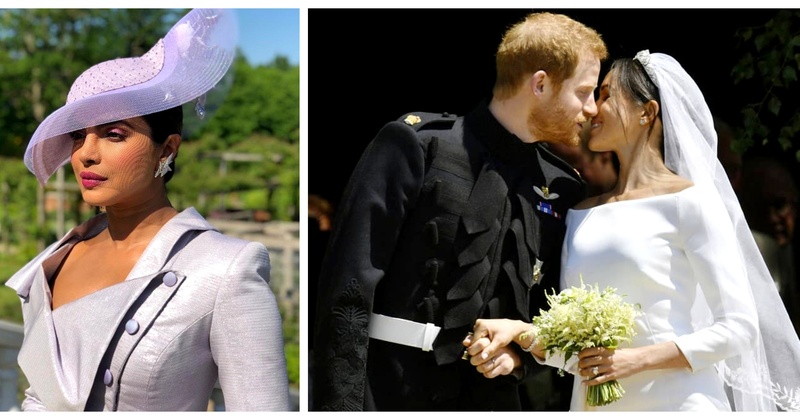 Finally it happened – the moment the whole world was eagerly waiting for. When an American girl married England’s prince & said their ‘I Do’s’. Yes, I’m talking about ‘The Royal Wedding’ which took place at St George’s Chapel in Windsor Castle!

A fairytale does-not get more real than this – because this really was a Royal wedding in every sense. Prince Harry and Meghan Markle are Husband and wife now, and will officially go by –  Duke and Duchess of Sussex.

Here are all the details you need to know –

Hours before the wedding:

Prince Harry meeting the well-wishers outside the castle.

Megan’s ring is a gift from Her Majesty The Queen itself. It’s a fashioned from a piece of Welsh Gold while Prince Harry’s is a Platinum Band with a textured finish. Also, both of them are from Cleave and Company.

Her ride to the castle:

She drove in to the castle with her mum, her mum got down arriving to the drive away and she rode with with the twin sons of her best friend, well-known Canadian stylist Jessica Mulroney.

Meghan made a stunning Royal in a custom made Givenchy Haute Couture gown by Clare Waight Keller.

Her walk to the altar:

In the arms of His Royal Highness:

Ms. Markle expressed the wish of having all 53 countries of the Commonwealth with her on her journey through the ceremony. Ms. Waight Keller designed a veil representing the distinctive flora of each Commonwealth country united in one spectacular floral composition.

The Tiara – Something borrowed:

Queen Elizabeth lent Meghan Markle the tiara she’s wearing today, Queen Mary’s diamond bandeau. It was made in 1932, with the entre brooch dating back to 1893, the palace says.

Prince Harry and his Best Man the Duke of Cambridge chose to wear a fur coat uniform of the Blues and The Royals:

“I Harry take you Meghan, to be my wife, to have and to hold, for richer for poorer, in sickness and in health, to love and to cherish, til death us do part.”

The flowers are being called “very American” and “wild” and many had to be added at the last minute. They are all locally sourced peonies, foxgloves and white roses, which are a special nod to Princess Diana.

Where they took their wedding vows.

The Queen arrived with Prince Philip, Duke of Edinburgh:

She has completed the outfit with an Angela Kelly hat, using the same lime silk tweed with sinamay and adorned across the crown with handmade lace crystals and pearls made by Lucy Price. Her brooch is The Richmond Diamond Brooch with pearl drop.

The Duke of Edinburgh is wearing a morning suit.

While Priyanka, despite sharing a close bond with Meghan, is not her bridesmaid, she is still the only who has made it to the exclusive guest list of the royals from Bollywood.

Oprah Winfrey arrived in a pink dress, a cream-colored hat adorned with pink flowers and a pair of sunglasses looking her elegant self. She sat in the Quire with the family and other close friends — not the main body of guests.

…. Posing with a Manchester attack survivor:

Amal Clooney was definitely the best dressed guest in a mustard Stella Mccartney.

In love with her pastel green floral dress from The Fold.

The queen of tennis Serena Williams and her hubby Alexis Ohanian:

…..and the ceremony ended with the usual ‘God Save The Queen’.

All the Inside Pics & Deets from Prince Narula and Yuvika Chaudhary’s Sangeet night! After their grand mehendi and engagement ceremony the television sweethearts - Prince Narula and Yuvika Choudhary hosted a ‘gra... Oct. 12, 2018 Everything that went inside Prince Narula and Yuvika Chaudhary’s Mehendi and Engagement ceremony! Television's sweethearts and one of the most adored celebrity couple - Prince Narula and Yuvika Chaudhary are all geared up to ... Oct. 11, 2018 Priyanka Chopra attended Nick Jonas’ Family Wedding as his date! Rumour mills were running high that Priyanka Chopra is dating the youngest JoBro after they walked the MET Gala together and no... June 12, 2018 This wedding brought one entire Swiss town to a hault! #BigFatIndianWedding It's not everyday that you see a wedding bringing one whole town to a halt and it’s more big of a deal when that town is Montre... June 8, 2018 The best muslim weddings we have come across so far! A Muslim wedding or Nikah, is celebrated with as much grandeur and elegance as any other Indian wedding. When we think about a ... May 23, 2018