Navy Groom’s Antics has Everyone in Splits! 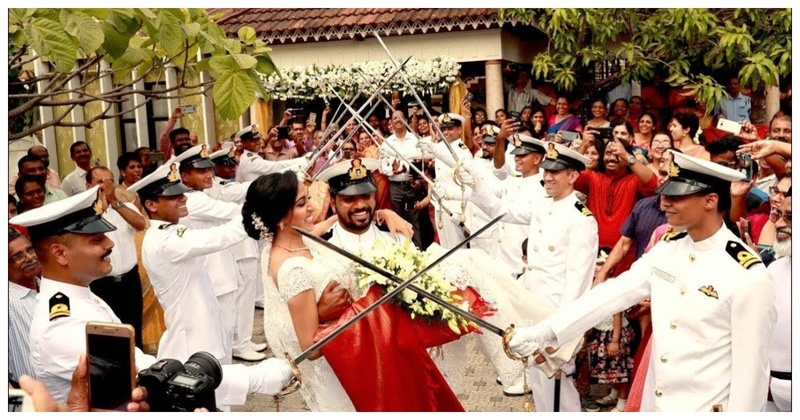 Twitter is like a wonderful playground where you find all types of children. Some political kids, some celebrity kids, some activists kid, some shaant bacche and some funny-bones Jones who tickle everyone present there. One such funny Jones was this video shared by Twitter user Binosh Alex Bruce. It showed a Navy officer doing hilarious tasks set by his colleagues while exiting the venue with his bride.

Lieutenant Abhinav tied the knot with Elena Varghis in a typical Indian navy wedding. According to a Navy tradition they received a spectacular and hilarious exit. In the video one can hear an officer shouting, ‘Ladies and gentlemen, we present to you Lieutenant Abhinav and Elena Varghis.‘ After this, the couple received a traditional salute from the navy officers present at the wedding. They had to go through an ‘arch of sabers’  and its’ video had everyone in splits!

The groom had to perform a task in order to cross the arch. The tasks were set by his colleagues and he accomplished all successfully! The task list was-

Lieutenant Abhinav took on these challenges sportingly and crossed every hurdle that came his way. Honestly, this video has made my day!

People, please bless us with more such videos!

Wishing the New 'Dream Girl' in Town, Ayushmann Khurrana a very Happy Birthday! Ayushmann Khurrana is known for creating quite a stir with his incredible movie choices and might I add, fashion choices. They ... Sept. 13, 2019 Rent Fabulous Designer Wedding Wear from Date the Ramp!   At a time when the prices are rising heavier and pockets lighter, a wedding might seem like a burden. Thanks to Karan Johar,... Sept. 11, 2019 The Maeva Store- Your Best Bet for Wedding Favours! The beautiful Elizabeth Taylor once said, “The beauty of fragrance is that it speaks to your heart…and hopefully, someone else’... Sept. 9, 2019 Celebs who Flaunted Gorgoeus Outfits for Ganesh Chaturthi Ganesh Chaturthi marks the beginning of the festive season in India. This year the festival amounted for twice the fun, owing t... Sept. 9, 2019 5 Takeaways From Idris Elba and Sabrina Dhowre's Wedding Nuptials Weddings are said to be made in heaven. This white destination wedding held in the Morrocan sunshine was enchanting. British ac... Sept. 8, 2019