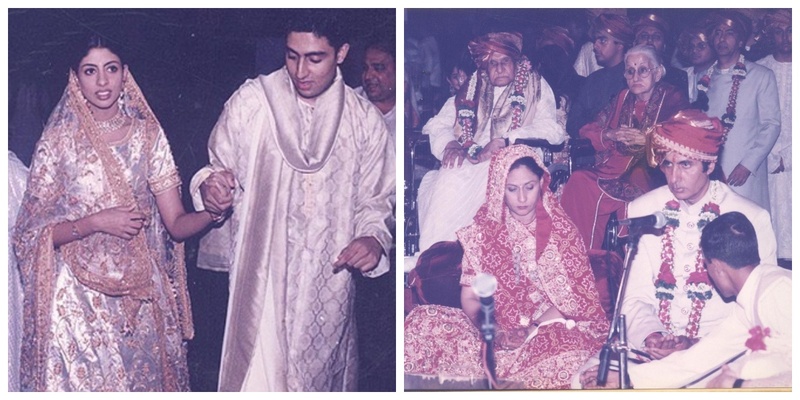 As Abu Jani Sandeep Khosla celebrated 33 years in the industry yesterday, they took to Instagram to share some unseen pictures of Shweta Bachchan Nanda and it goes beyond saying that it broke the internet. Shweta Bachchan tied the knot with the Delhi based business tycoon Nikhil Nanda in 1997 and it was definitely an affair to remember.

While the whole media was abuzz with this news albeit 2 decades ago, the couple decided to keep the ceremony intimate and never shared the pictures with the media. (Also, no Instagram or any other social media existed back then…) So, you can only imagine the surprise (read uproar) the netizens reacted with when they finally got a glimpse of the Bachchan-Nanda wedding.

Shweta Bachchan was a bride who wore white, as described by the designer duo. And the pictures are bound to make you go awwww. While it’s very common to hire stylists and decorators in today’s time, it wasn’t a trend back then. Also, it was the designer’s first wedding that they designed for and here’s what they had to say, taking a trip down memory lane –

“Their wedding was the first-ever event done by Abu Jani Sandeep Khosla and the duo handled everything from the decor to ensembles for each function for the entire Bachchan family.”

The series of photos starts with Shweta Bachchan Nanda’s mehandi, where the then-bride-to-be is seen wearing a white chikankari lehenga. “1997: The Bride wore White! Shweta Bachchan exudes pristine grace in a spectacular floral veil and ornaments at her mehendi dressed in exquisitely intricate chikankari. A pathbreaking ensemble which made the statement that white is absolutely auspicious,” the caption of the post said.

It wasn’t long before Shweta responded saying, “Ahhhhhhhhh omg!!! The bride was a babyyyyy!!! My fav outfit 💋”

According to the designer duo, it was a beautifully intimate affair at Amitabh and Jaya Bachchan’s Mumbai residence. “For her mehandi, we dressed the entrance of the house in trees made of white tuberoses. Inside, beautiful floor-to-ceiling curtains in intricate floral jaali adorned the space. Her sangeet was a travelling royal entourage awash in beiges and oranges. There were flags with gota details and in-lit tables, and the florals were inspired by the Bengali tradition of flowers, shola work,” Khosla had revealed in an exclusive interview to Vogue India.

The Sangeet night was a jazzy affair :

In the first one – Shweta Bachchan Nanda being escorted to the event by her lil bro – Abhishek.

In the 2nd one – she is shown shaking a leg with her husband.

While in the 3rd one – the whole fam-jam is seen dancing together.

For this event, Bachchan Nanda is spotted in a gold and white “brocade khinkhaab ghagra with gold zardozi vasli in a leafy tendril pattern.”

The wedding pictures present rare glimpses into the beautiful ceremony, starting from the bride being carried down to the mandap on a traditional doli, followed by a picture of her and the groom, and then a picture of the parents Amitabh and Jaya Bachchan performing wedding rituals with the grandparents watching on.

In one of the photographs, Shweta is seen holding two betel leaves against her face as she enters the wedding mandap, a sweet nod to mother Jaya’s Bengali roots.

Another picture has the mother and daughter twinning again in chikankari ensembles.

Well well, I am totally in love with their wedding pictures, how about you?

10 Brides who Nailed their Bridal Photoshoot! Time and again brides have won our hearts by just being themselves. Whether she is a drama queen or a minimalist, we’ve loved h... Aug. 13, 2019 8 Unique Wedding Invitations that Raised the Bar One of the best things about working in this dynamic industry is that everyday is full of surprises. Each day a bride is breaki... Aug. 13, 2019 6 Bollywood Divas who Walked Down the Aisle in White It is every girl’s dream to have a perfect wedding. Dressed in the perfect dress to celebrate one of the most important days. W... July 15, 2019 10 Ways in Which You Can Include Bollywood in Your Wedding! If cricket is a religion in India, Bollywood is the daily prayer. From the regal Mughal-e-Azam to the not so regal Badrinath ki... June 24, 2019 Another Bollywood marriage on the cards? Bollywood is on a roll! One more wedding is probably on the cards. Farhan Akhtar and Shibani Dandekar have been in the news ev... March 7, 2019