Should Contraception Be Discussed Before the Wedding Night? – Weddingz Advice #25 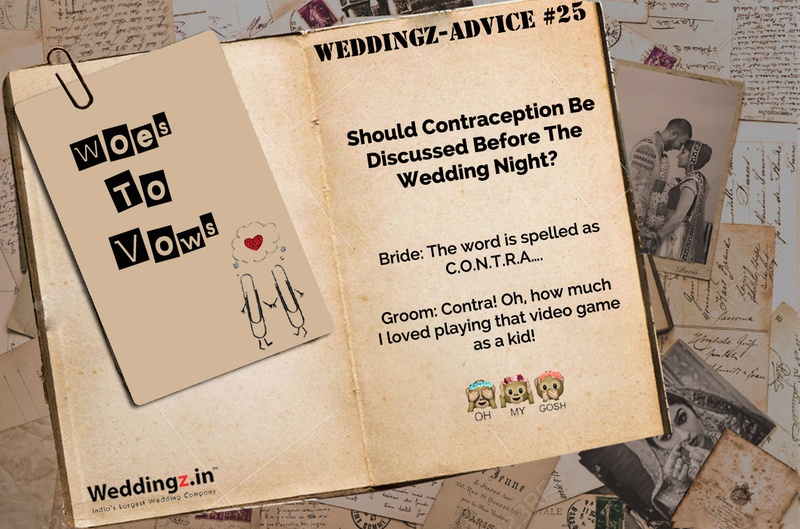 Did you know that in the medieval ages, women had to use an array of bizarre things as contraceptives? Some of them included crocodile dung, beaver’s testicles and hallucinogenic plants. Aren’t you glad that gone are those days? Exactly. So now that we are living in more modern times, where birth control is a right as well as a choice, shouldn’t you be more open about it? Why not start with your would-be husband and get the awkwardness out of the way before you actually get hitched! Not many brides feel up for confronting their partners directly about this! So, this is how you can bring up contraceptives before the wedding without actually spelling it for him!

Slip it Into a Checklist

You know all those lists that you send him to check? Yes, the wedding planning ones. Simply slip this link into one of those lists and he should pick up the hint!

Make a Joke About It

Sign up with some birth control or other contraceptive brand and they will surely send you an e-mail in a day or two. Simply forward it to him and make a joke like, “Looks like they know we are getting hitched”.

Organize a Game of Pictionary

No, we don’t mean include it in your social activity list with family. But you could have an intimate group of friends organize a fun Pictionary with a wedding theme and blame it on them when you draw *say it quickly and no one will understand tone* whatever it is that you have to draw!

Just Show Up with It

Well, you ARE a modern day woman who can make her own choices. Why not make your own arrangements prior to the wedding (since you might not get a moment alone during the wedding) and reveal your genius on the wedding night? If he is amused and impressed, you have a keeper! If you are still unsure of how he would react, why not say it’s a gift from friends? 😉