Shweta Tripathi, the bubbly actress from ‘Masaan’ is engaged & her mehndi design is ruling the internet! 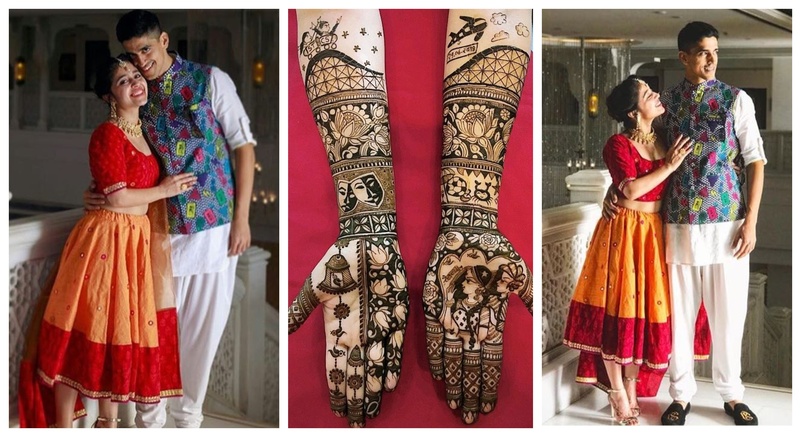 What started out as a mid-air conversation five years ago is now culminating into a wedding for ‘Masaan’ and ‘Haraamkhor’ actress Shweta Tripathi and actor-rapper, Chaitanya Sharma aka SlowCheeta!

The wedding celebrations that’ve begun in Goa at the rapper’s house have already taken the internet by the storm. It all started with a fun filled and chilled out mehendi, with the bride-to-be looking adorable in a yellow outfit. Have a look at her mehendi pictures: 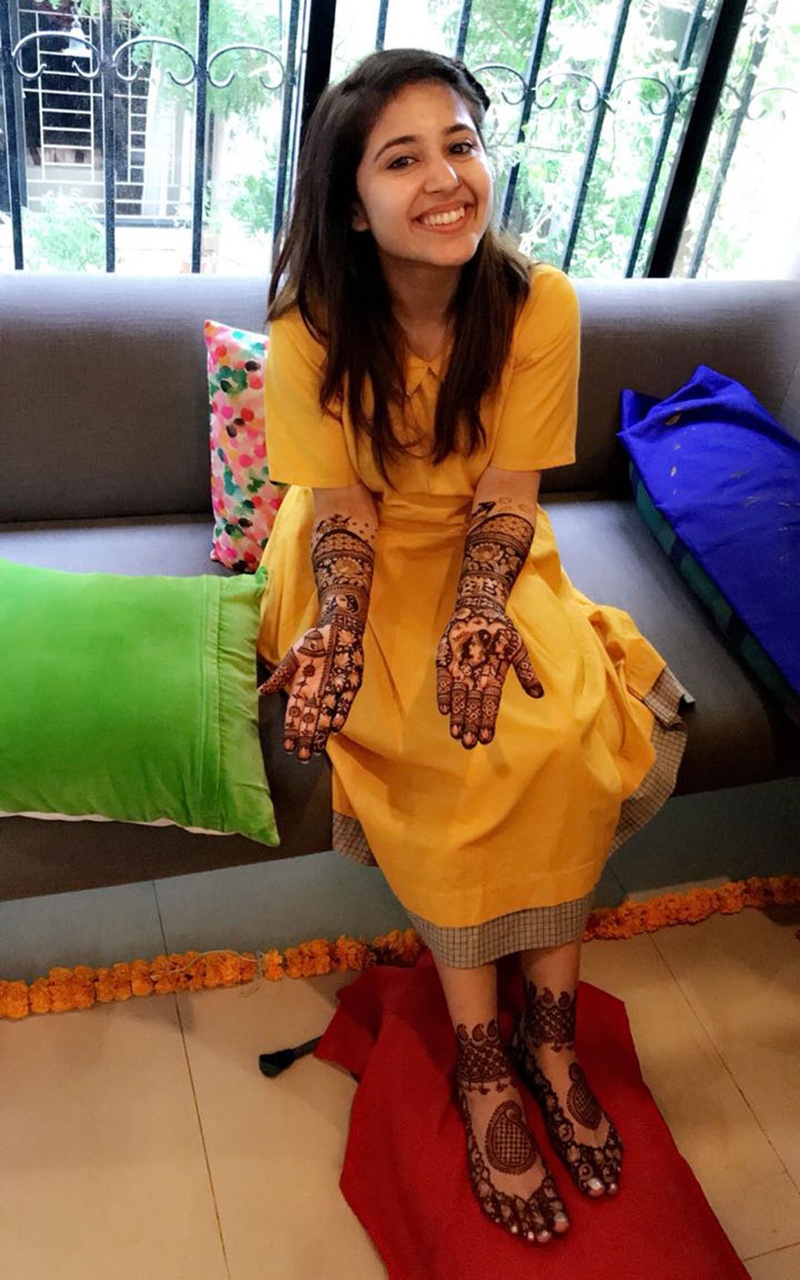 How cute is her peter-pan dress from Silayi?

Look at the intricate mehendi design: Here’s the bride-to-be explaining her mehendi design by Jyoti Chheda, “There are elements from our wedding invite too. There’s a crab, as I am Cancerian, there’s a football as it’s his first love, apparently. Then there’s an umbrella, champagne glasses, sunglasses a starfish and bride and groom figurines. I love lotuses, birds and fish, so they are also in my mehendi in abundance, all over!”. 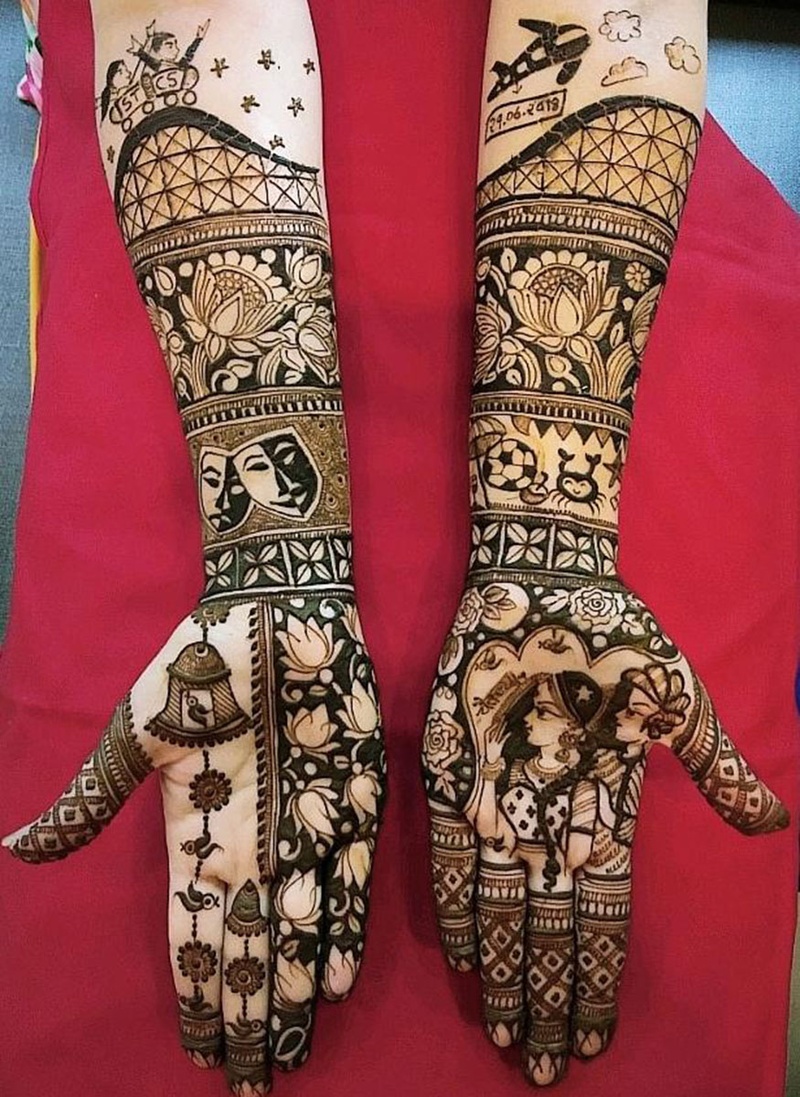 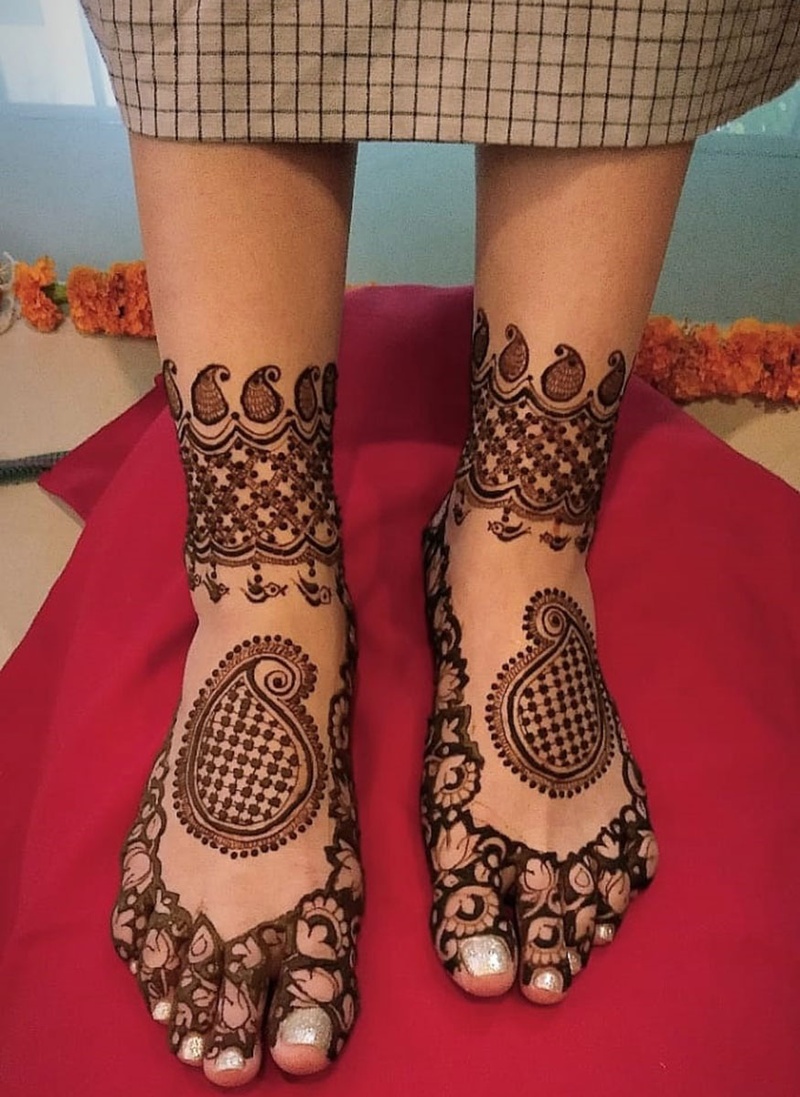 She wore this really offbeat & quirky red & yellow custom made mid length lehenga for her mehndi from Colors and Mirrors and looked her charming self ! –

The love birds posing for the camera –

I have what I need and I’ll get what I want! @battatawada

Over the weekend, a bachelorette party was hosted for Shweta by her friends, which was gatecrashed by Chaitanya. He shared a picture from the party and wrote: “This cutie is proof that someone up there loves me a lot. Can’t believe I’m getting to marry this ball of happiness! Mr and Mrs Sharma- Coming soon.”

This cutie is proof that some one up there loves me a lot! Can’t believe I’m getting to marry this ball of happiness! Mr and Mrs Sharma- Coming soon 😬 @battatawada

Also, here’s how the groom-to-be proposed to his beloved. In the words from his now fiance, as she said in a recent interview, “He proposed at a place called Cuckoo Club, which is a performing place in Mumbai. He wanted to do it on stage because that’s how we met — for a play. He had told me he has a new play, so I went to see that… But it was the proposal,”.

Got permission to spend the rest of my life with my favorite @battatawada 🤩 She said yes! #gocheetagetbattata

Shweta Tripathi and Chaitanya met in Delhi while they were filming in for two actors in a play. They later met on the flight back to Mumbai and fell in love. Shweta and Chaitanya dated for almost five years after which the rapper proposed to her, again on a stage.

Shweta Tripathi will be soon seen in a web-series, titled Mirzapur, and in a film (Cargo) in 2018 while Chaitanya Sharma will be seen in Zoya Akhtar’s Gully Boy, co-starring Ranveer Singh and Alia Bhatt. Well well, can’t really wait for their wedding pictures!

Kylie Jenner debuts a new diamond engagement - like ring on 'That' finger! A celebrity relationship mystery that walked in from 2018 to 2019 was ‘When the heck will Kylie Jenner and Travis Scott get eng... Jan. 8, 2019 30 latest bridal mehndi designs of 2018   In the array of pre-wedding functions, if there is something that the bride and her tribe enjoy the most, it is the Mehndi. W... Sept. 28, 2018 These Exclusive pictures from Shweta Tripathi and Chaitanya Sharma's quirky wedding will be the best thing you see today! Indian weddings have a penchant for being super royal and elegant, year round. That’s why, when a wedding comes up that celebra... Sept. 19, 2018 Justin Beiber and Hailey Baldwin sneakily got married and we can't believe it!   Just days after taking the Internet by storm after announcing their engagement, Justin Bieber and Hailey Baldwin reportedly ... Sept. 15, 2018 Ed Sheeran is Married people and here’s proof that he found his 'Galway Girl'! Yes you read it right people. Ed Sheeran married his longtime girlfriend Seaborn!!! The ‘I Do’ ship had already sailed and ever... Aug. 30, 2018