Sonam Kapoor opens up about her love story that broke the internet! #Sonamkishaadi 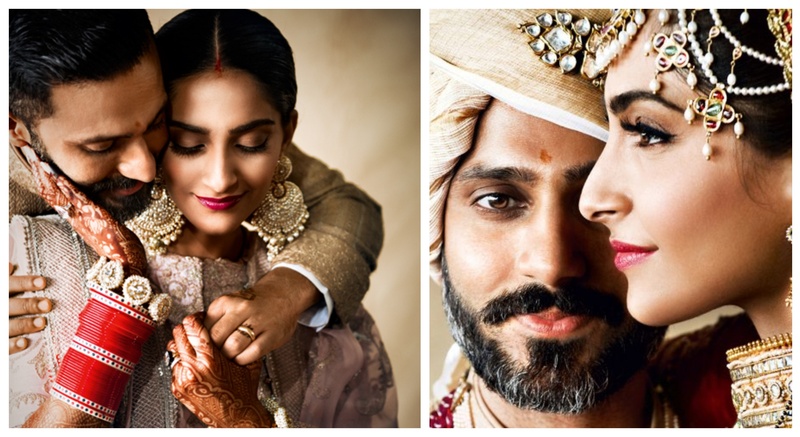 A love story that began on Snapchat to a wedding that literally broke the Internet, Sonam Kapoor Ahuja and Anand S Ahuja have been giving us #CoupleGoals since it’s inception.

It was 2 years ago, when the couple had been having conversations on Facebook and Snapchat, which later progressed to late-night phone calls. The charade went on for 2 months, until the couple decided it was time they finally met.

The whole point of meeting was to see if their budding romance which began online over two continents could survive the daylight glare of an actual meeting. Sonam chose the location to be London, since Anand lived there and she had a fitting with designers Tamara Ralph and Michael Russo in the city prior to her Cannes appearance.

The duo decided to catch up in the afternoon, but excitement and apprehension meant patience was in short supply. So, they met immediately – he in his gym clothes, she in “gross” track-pants and a tee. They spent the entire day walking around London, talking. And exactly two years from that day, they wed in Mumbai.

This is how Sonam Kapoor-now-Ahuja too, recalls her first date in an interview with Vogue India, “I was apparently wearing the worst sneakers he had ever seen. I keep telling him that he fell in love with me despite my bad sneaker game… That day, walking and talking in London, I knew he was the love of my life. He apparently knew the first time we spoke on the phone. It was just so easy.”

If you wanna know how the sneaker king describes his first date, here it is, in his own words, “The first time we met, we talked about our respective work. I was just struck by the fact that I could speak to her so openly about everything. We were chatting on Snapchat one night and she said, ‘Stop texting, just call me.’ And we spoke for two hours that night… Our friendship started over superficial things like vegan chocolates and sneakers but soon we were having deeper conversations.”

….and they fell in love:

They are a couple who likes each-other’s oddities. She likes fiction, film and dancing, while he likes basketball, sneakers and philosophy. They’re both vegetarians, die-hard homebodies, outdoor-lovers and morning people.

She’s now Sonam K Ahuja, he’s now Anand S Ahuja. “He makes clothes—and I wear them! He comes from a business background, so that’s alien to me. I’m the third generation in a film family. So there’s a lot to talk about, a lot to discover about each other, but we have a lot of similarities,” says Sonam.

On her wedding lehenga:

Everyone guessed the Sonam Kapoor’s wedding lehenga would be an Abu Jani Sandeep Khosla or a Sabyasachi design, but as a true fashionista Sonam Kapoor surprised everyone! The bride choose to wear an Anuradha Vakil classic red lehenga, and here’s why – “I’ve known Anuradha for many years. She’s a good friend of my mom. I fell in love with her clothes, so I’d asked her to design for Saawariya—probably the only film she’s ever done or will do. I don’t know anyone who understands Indian garments, textiles and embroidery as she does. I’d always tell her, ‘You are going to make my wedding lehenga. When—and if—I get married, you will.’ And I didn’t forget that,”! Sonam told Vakil she loved lotuses, so the designer translated them into motifs, embroidered in gold and silver thread.

The groom does not wear a ring, and here’s why:

They planned every aspect of their wedding together:

Every detail of the wedding, she points out, was planned together by the couple. The Jo Malone-scented spaces, the jewellery (collected over the years, inherited, or designed by childhood friend Tarang Arora of Amrapali), the couple’s initials on her Jimmy Choo accessories, their sun signs on the mangalsutra, the foliage-print wallpaper that matched the wedding invite, her Gaia Repossi promise ring where no diamond resembles the other.

About her much talked about engagement ring:

Tarang Arora designed a mellow Golconda diamond in a gold setting, more liquid and citrine-esque than blinding. “I didn’t want a big fancy diamond. I wanted something that I wouldn’t feel embarrassed to wear all the time, I didn’t want something loud or showy. Anand sourced the stone—he loves saying it. He says it’s a meetha colour. It’s a little yellow, so it looks old and pretty.”

Pak Cricketer Hassan Ali Proves Love has no 'Boundaries' Popular Pakistani fast bowler Hassan Ali bid his bachelorhood adieu and tied the knot with Dubai-based Indian flight engineer S... Aug. 22, 2019 Badminton Star Saina Nehwal is all set to marry her BF Parupalli Kashyap in December! It seems to be raining weddings in the sports world too, and I for one literally Can’t Keep Calm. Right after the Dangal girl s... Sept. 26, 2018 Anand Ahuja tried to pair Sonam with his BFF and we love what happened next! Sonam Kapoor and Anand Ahuja are definitely the coolest and chillest Bollywood couple and have been giving us major #Relationsh... Sept. 18, 2018 Sonam Kapoor in a gorgeous purple lehenga with hubby, Anand by her side is the best thing you'll see today! If you’re looking for a one-stop wedding-wear inspiration, then always take cues from Sonam Kapoor. Whether you are going to at... Sept. 10, 2018 Abhishek Bachchan grooving to Jhinghat at his sister's wedding is the coolest thing you'll see today! Remember the Abu Dhabi wedding that broke the internet which Jr. Bachchan attended with Amitabh and Jaya Bachchan? Yes yes the ... Aug. 29, 2018