When Daniel Bauer Planned the Perfect Proposal but got Proposed Instead! I have been following Daniel Bauer’s work for quite some time now. This uber-talented Australian-born, Mumbai-based makeup artist is one of  India’s most celebrated makeup and hair artist after all! His clientele boasts of names like Deepika Padukone, Katrina Kaif, Priyanka Chopra, Anushka Sharma, Radhika Apte, Bhumi Pednekar to name a few and additionally, some stunning work that goes in for India’s premium fashion week to an Instagram following of 175K, he is a force to reckon with!

If you have been following him too, you would know the guy is not someone to give a sneak peek to his personal life. So, imagine my shock when he announced to the world that he married his partner in an intimate wedding ceremony and I legit couldn’t KEEP CALM! Daniel Bauer recently tied the knot with his long-time beau – Tyrone Braganza, in Frankfurt Germany and it was definitely an affair to remember. So, Bauer planned to propose to Braganza on the ship he was working on. Their Indian traditions were important to the couple, so Bauer visited his now-husband’s mother and asked for his hand for marriage before leaving for his proposal trip.

Braganza recalled the proposal – “Daniel came to see me while my ship was sailing to the Caribbean from Fort Lauderdale. He brought his parents along and we got to spend time together and understand the family dynamics.”

P.S., Braganza also asked for blessings and approval from Bauer’s parents. “I asked them if they would be happy if I married Daniel. I was ready to pop the question to Daniel; however, he beat me to it and had the ring with him the same night that I spoke to his parents”.  Isn’t that the cutest thing you read today?

Braganza said to Vogue, “July 4 marked the day of the Town Hall wedding. Everything went really well, after the wedding we even attempted to cut a log of wood as a couple. According to an old German wedding custom, it represents the first obstacle that the couple must overcome in their marriage.” 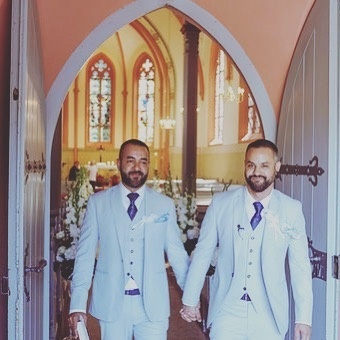 He went on further to add, “July 6 was the church ceremony, which started at 10 AM. The complete wedding was performed in German by a priestess and was translated into English by a friend of Braganza’s for his family from India. The priestess brought us into the church with the song ‘Hallelujah’ sung live in the background. The ceremony lasted a good hour and a half, the most exciting part of the ceremony had to be the vows and the exchange of rings.”

The tale of the rings:

When it came to the rings, turns out Braganza’s actually didn’t fit him at the time of the ceremony. “While we got our rings measured while buying them, we didn’t try them on before the ceremony,” says Bauer. “I was struggling to put the ring on his finger, and suddenly, his friend who was translating the wedding told me to use a cream from Tyrone’s pocket—I have no idea how he knew he was carrying it with him at the time. We used it during the ceremony to put the ring on and then (we) were struggling with soap and water to take it off later.” *continues laughing* As for the post-ceremony rituals, Braganza said, “The end of the ceremony had traditions like releasing the doves and cutting a heart shape on a white table cloth and passing through. After the ceremony, a beautiful horse-drawn carriage took us away from the venue.” The couple had worn outfits by Shantanu & Nikhil for the Town Hall, and Ashish N Soni for the church wedding.

8 Contemporary Mangalsutra Designs  The mangalsutra, often known as a “suhaag ki nishani” is an indispensable part of a bride. It is considered as a marital symbo... Aug. 28, 2019 Chic Farmhouse Wedding Venues in Bhubaneswar for a Stunning Outdoor Celebration A diva bride, a dapper groom, and an insanely beautiful wedding venue, perfect, isn’t it? We know that to make your wedding whi... Aug. 27, 2019 LFW '19 Proves it has Something for Every Bride! Firstly, I am going to state the obvious.  Just like every year, Lakme Fashion Week has Winter Festive ‘19 has superseded my ex... Aug. 26, 2019 Wishing a Happy Birthday to the Debonair and Charming, Jim Sarbh! Wishing the suave and electric Jim Sarbh, a very happy birthday! One of the many talents of Jim is the way he carries himself i... Aug. 26, 2019 Top Budget-Friendly Wedding Venues in Bhubaneswar to Plan Out a Scintillating Wedding Marriage on the cards? If yes, you probably are worried about the budget for your wedding, right? It’s only natural to have a l... Aug. 26, 2019