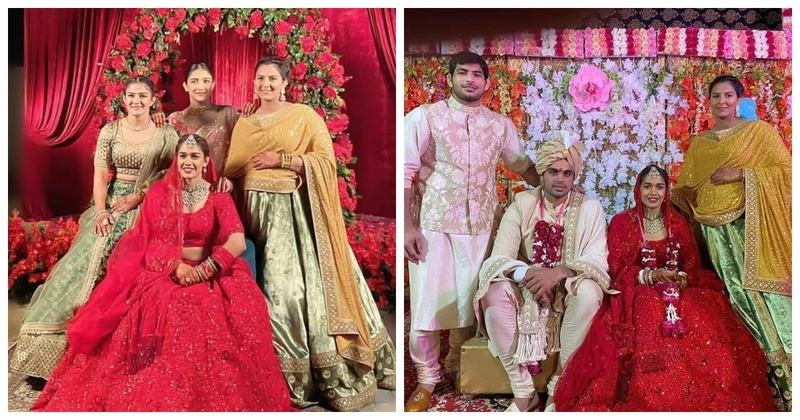 The Phogat sisters- Geeta Phogat and Babita Phogat rose to fame after Dangal (a biography on their lives) was released, which also starred Aamir Khan.

Their journey is nothing short of sheer inspiration for every young girl in this country, having toto fight against all odds and to make do with whatever is available, only to make their country proud! Not only did they pour in years of hard work into the sport, but their father, Mahavir Singh Phogat devoted his entire life in ensuring his daughters make a name for themselves in wrestling, an otherwise male-dominated sport.

On 1st December 2019, Babita tied the knot with her beau and fellow wrestler, Vivek Suhag. Vivek and Babita met at an event in Delhi and dated for five years. The highlight of the wedding was that instead of seven pheras, Babita decided to take eight. Wondering why? She took an extra phera to pledge to save, teach and let the girl child play.

Pictures from the grand ‘wrestler’ wedding have flooded the internet and fans are gushing over how Babita Phogat looked absolutely stunning in her ensemble.

Here is a glimpse of the affair:

The ‘Phogat’ sisters looked gorgeous in their Sabyasachi outfits.

Prior to the wedding, Babita had an intimate mehendi ceremony at her ancestral household in Haryana. She was seen spending some cute moments with her brothers and sisters.

Taking a leaf out of the famous Priyanka-Nick wedding, the 30-year-old wrestler decided to wear a lehenga similar to PeeCee. While the groom wore a cream and golden attire.

The bride paired her outfit with a beautiful neckpiece and matching maangtikka and kept her makeup minimal.

Babita’s wedding was a rather intimate affair with close family and friends.

Earlier this year, Babita and Vivek were seen on a popular dance reality show, Nach Baliye Season 9. The couple won a lot of accolades for their on-screen chemistry and the kind of hard work they put into perfecting their dance.

7 Blockbuster Neha Kakkar Songs for your Wedding Playlist There is no denying that curating the perfect playlist for the sangeet ceremony is incredibly important. Especially when you wa... Jan. 14, 2020 12 Different Ways to Celebrate a Wedding Rehearsal Rehearsal dinners will always be a way of bringing together the couple's close friends and family on the day before the wedding... Jan. 13, 2020 14 Details to Keep in Mind for a Royal Theme Wedding Planning a wedding is a task, but planning a royal one is a detail-oriented process, i.e., humongous task! Royal weddings take ... Jan. 13, 2020 5 Reasons Why You Should Get Married in India ﻿ India is not like the other countries of the world. It is filled with experiences and wonders. From geography to gastronomy, fr... Jan. 10, 2020 Actress Nehha Pendse tied the Knot with Shardul Bayas Just 7 days into 2020 and Instagram is abuzz with yet another celebrity wedding. TV actress Nehha Pendse recently tied the knot... Jan. 9, 2020