Rahat & Gloria Pathankot : ‘When two art-enthusiasts fell in love, they sketched their path to marriage’ 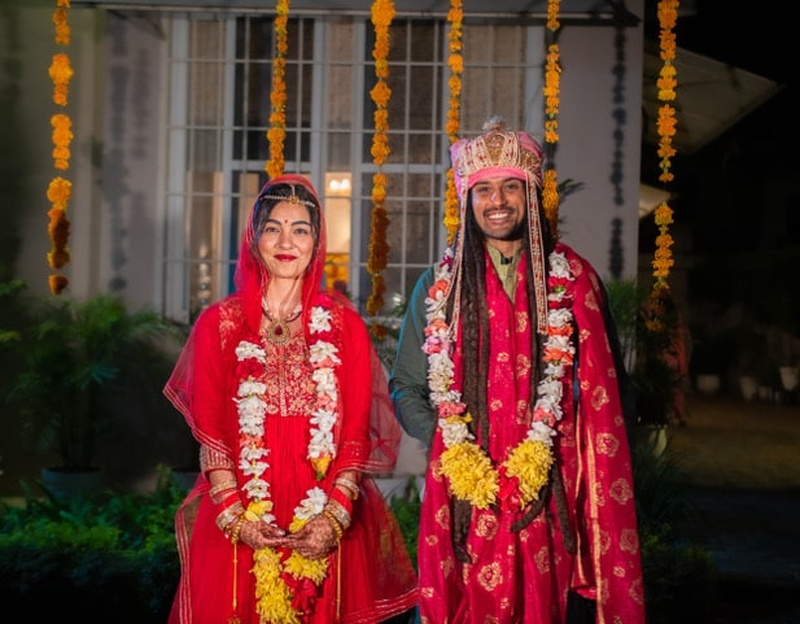 “Become aware that love is an art, just as living is an art” – Eric Fromm

Gloria and Raahat’s love story is as filmy as you can imagine! These young art enthusiasts met each other at a painting workshop organized by the world-famous visionary artist Amanda Sage in LA and felt an instant connection on seeing each other! After the workshop, they exchanged numbers and stayed in touch. A few weeks later, they caught up for dinner and thoroughly enjoyed each other’s company. Some more meetings and exchanges followed and they intuitively knew what they have is something very special.

Things had just begun on a great note and these two lovebirds had started painting the town with their love that Rahat had to return to India for a work commitment. Hence their love story now witnessed six months of a long-distance commitment and yet the distance was only physical as they kept going stronger with each passing day. Six months later, Gloria moved continents and landed in India to be with the man of her dreams! And the rest is history.

Didn’t we say this was straight out of a film?

An atypical proposal was waiting for Gloria. Initially, Rahat proposed marriage to her soon after they started seeing each other! This came as a surprise to Gloria and she thought he was joking around, but he kept asking. And finally there came a time when she took him seriously and gave the nod! Gloria recounts this fond memory and says, “  I left India in April 2019 to organize an international Art Exhibit in Spain. As I was preparing for my return he asked me again, I said yes and we had our engagement ceremony just a few days after I landed back in India in June.”

Gloria and Rahat had planned an elaborate cross-cultural wedding in India which was to be attended by all their close family and friends. However, on account of the global situation courtesy the pandemic, they decided to not postpone their nuptials further and with the blessings of their near and dear ones to get married at home!

Hence began the preparation for their super intimate, memorable and meaningful home wedding. They had a small haldi and mehendi function with only Rahat’s family. Relatives managed to get a panditji on board and the bride and groom chose sourced their outfits from local designers and zeroed it down via facetime! Gloria’s stunning red attire was from Jaamawar Minx. She says, “They saved my life! We face-timed to go over their options and I fell in love with the red dress as soon as I saw it, and didn't even think twice about it. I sent my measurements and they delivered my dress just 3 days before our ceremony.”

Rahat opted for a decent kurta pyjama from Studio Urbanity. He sent images of what he wanted and they managed to put something together in just 3 days and delivered his outfit a day before the ceremony.

Though this was nothing like the kind of marriage they had envisioned, it was perfect nonetheless! The best part was seeing all of their loved ones from across India, US, Costa Rica, Canada, London and Australia join them in via zoom. Gloria expresses her emotions and mentions, “ It was all very emotional and uniquely special. The way everything perfectly fell into place and the energy we felt that day was absolutely beautiful. We are very grateful.” 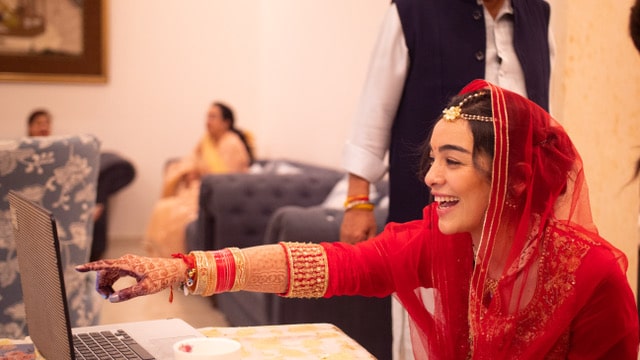 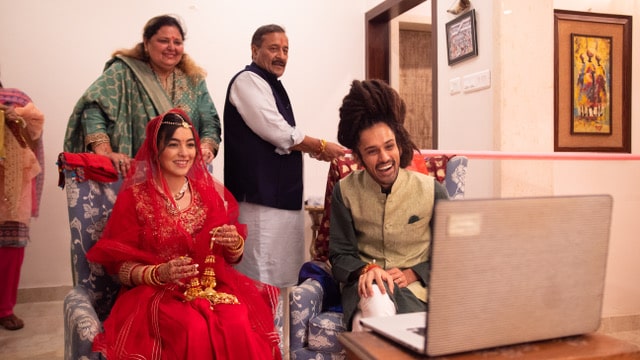 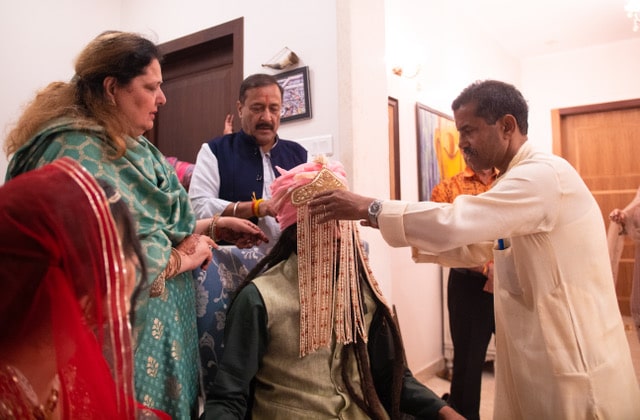 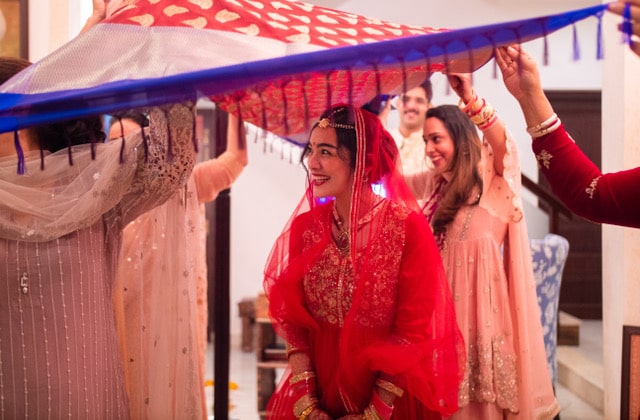 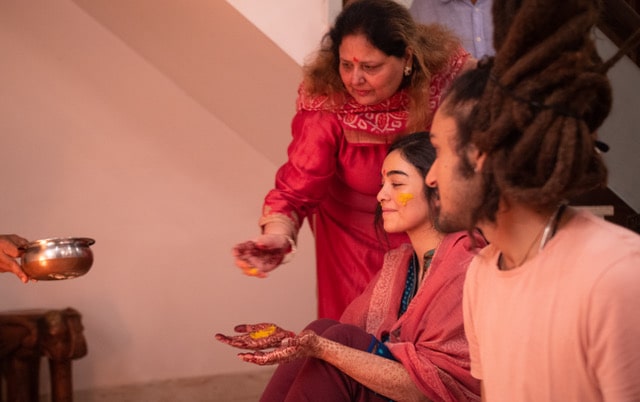 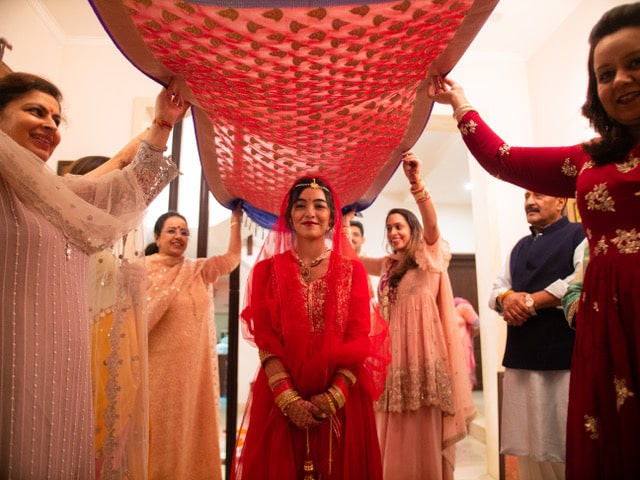 Disha and Jigar Tied The Knot in A Dreamy Wedding Celebration; Indeed A Celebration of Love! They met, they fell in love, and they lived happily ever after. Yes, this is the love story of the couple that we are going to ... May 6, 2021 Dia Mirza and Vaibhav Rekhi Tied The Knot in a Surreal Wedding Ceremony! “Love doesn't make the world go 'round. Love is what makes the ride worthwhile.” ~ Franklin P. Jones While Dia tried her bes... March 1, 2021 An Incredible Indo-Serbian Wedding- Ansh &amp; Slobodanka  ‘When love knocked on the doors of a lovely Indo-Serbian couple, they knew it was for a lifetime.’ “Being deeply loved... Dec. 15, 2020 Aishwarya and Himanshu Thailand Destination Wedding ‘When childhood lovers turned life partners in a beautiful home wedding set-up’ “The future for me is already a thing of the... Dec. 15, 2020 Jasnoor and Rakesh Lovely Ludhiana Wedding “Love is a friendship that has caught fire.” – Ann Landers ‘When colleagues turned friends and finally lovers, a cross-cultural... Dec. 1, 2020