Imagine having a perfect love story set amidst the perfect backdrop of hare bhare khet and unche pahad.  Such as Punjab and Himachal where this lovely couple belongs to! Nanki and Shorya. Nanki,a peppy punjabi girl,  the only beloved daughter of her parents, is a lawyer by profession while Shorya, who is also the only child,  is a strong headed businessman taking care of his family business.

Both Nanki and Shorya met through common friends and have been good friends for a long time, which makes their relationship even stronger! Ofcourse, when best friends turn into soulmates there is no looking back from there. Since they both knew each other for a long time, they were already aware about the likes and dislikes of each other. So it was even easier for them to get along and take the decision for the next phase of their lives together.

There was no need for a proposal, they knew they were compatible with each other. The question was not a yes or a no, the question was When? They finally decided to get married in the cold winters of November.

People got tipsy over the course of night enjoying all the music and the scrumptious food served to them. They were so ‘high in spirits’ they actually missed eating the main course due to not having the track time enjoying the party. Now that is the kind of engagement party one wants to have, where the guests can let loose and enjoy themselves to the fullest.

Nanki wore  embroidered light pink lehenga with a pistachio hued blouse by Shantanu & Nikhil.  Gayatri Sharma, the hair and makeup artist gave her a soft and supple look with smokey eyes and lightly tinted lips. Giving Nanki a perfect look. Shorya complemented her perfectly in his black tux by Qbik.

The cocktail party was no less than an entertaining affair! Conducted on the following day of the engagement, both the families decided to have cocktail parties separately. SSB  Officer’s Mess in Ghitorni, Delhi was the venue decided for the groom’s family. Nanki and Shorya wanted to make both parties, along with their guests comfortable enough to have a good evening letting themselves drink and dance without worrying of  being judged. They wanted them to celebrate in their own ways. So, they smartly planned it out for their guests and hence decided on separate venues.

Next on the list was the fun filled mehndi night which was at Essex Farms. The cozy open air venue was decorated with happy fairy lights and bulbs. Since it was mehndi the couple kept the theme as green for everything. Right from their clothes, decor to guests everything was in the hues of green. Shorya looked very cute in a sea green kurta set by Qbik, while Nanki nailed her colour coordination with him in her customized lakhnavi sea green lehenga from Solis by Radhika Soni. She paired up with a unique floral hand bracelet by Artflora and long heavy earrings.

“I wish I could repeat this night over and over again” is what Nanki said reliving the moments of her mehndi while answering the questions for us. There were not more than 150 guests for this ceremony and like I mentioned earlier no party is complete without drinks for Punjabis, this one too had liquor raining for the rest of night. Along with that was dancing of course because “Punjabiyan di battery charged rehndi hai…  chauvi ghantey” They never get tired! Nanki clearly remembered how almost everyone was drunk by the end of the night and the groom and his cousins had crashed her mehndi which was a cherry on cake. This summed up with a little more drinking and a lot of dancing.

Mehndi favors included assorted dupattas and hand harnesses selectively picked from Chandni chowk and tags made by the bride and her friends for the bride’s side of the relatives and friends for mehendi function.

Haldi ceremony was a simple day time function for both the bride and groom. For Shorya, it was a cultural treat with a whole lot of liveliness and fun along with traditional himachali music, a lot of dancing and everyone adorning the color yellow making it a visual treat. He wore a simple yellow kurta set all set be doused with Haldi

As for Nanki, she draped herself in a yellow saree and paired it up with floral haath phools. She wore long, flowy Kaleeras and had a lot of fun rustling them with her bridesmaids.

The wedding was hosted at The Lalit, Barakhamba Road. Decorations for the day were kept glitzy with fairy lights and drapes. The mandap decor was simple yet unique and was decked up with leaves and Rajnigandha (tuberoses).

Nanki looked drop dead gorgeous in her maroonish red sequined lehenga along with a pink hued dupatta  by Gunjan Arora. She paired it up with minimal jewellery, a meenakari double layered choker set along with a fine maang tikka and a sleek nath. She had the outfit with two dupattas along with a long shirt and sharara to switch for anand karaj later. Makeup artist Priyanka Suri’s makeup gave her the perfectly natural look that complemented her attire. Shourya looked princely in an ivory sherwani along with a pink safa and a stole by Qbik. After vedic pheras, the couple also solemnised their love in a traditional Anand Karaj ceremony in a Gurdwara. 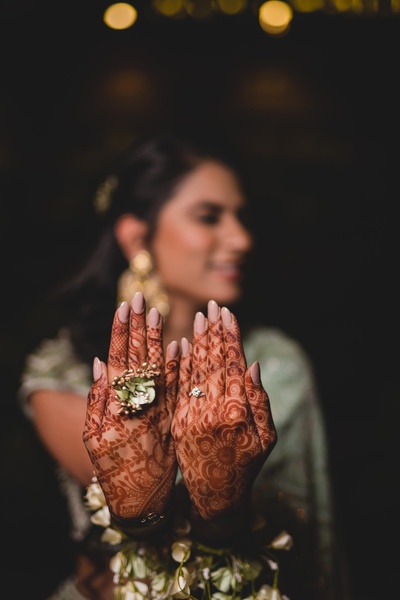 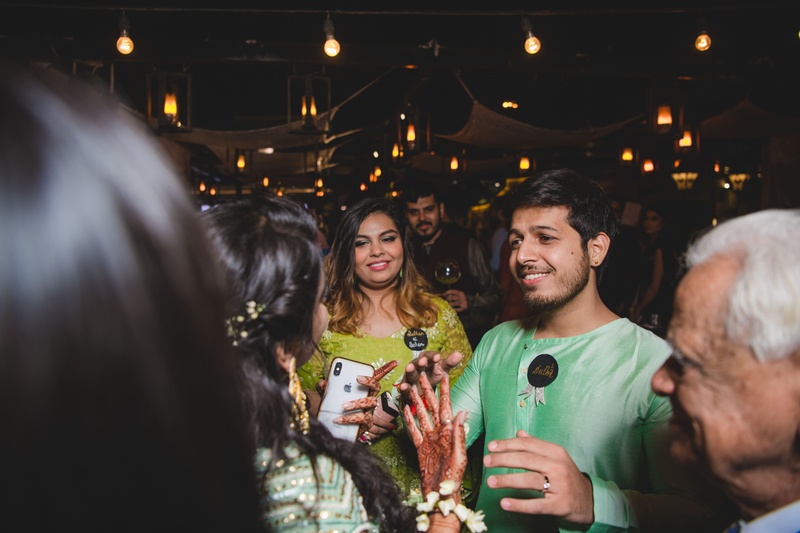 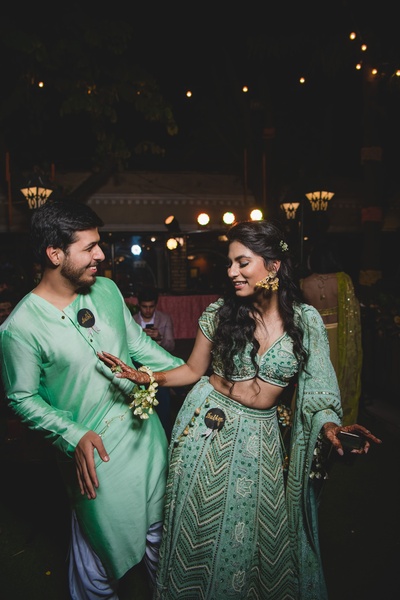 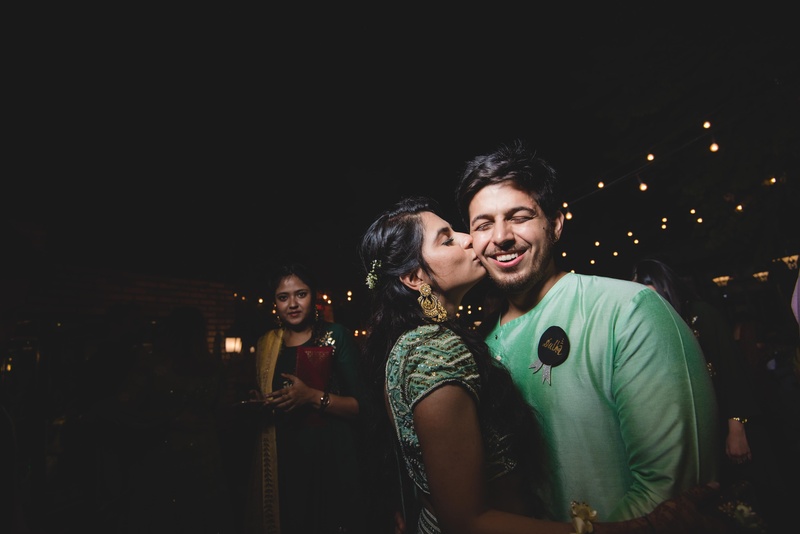 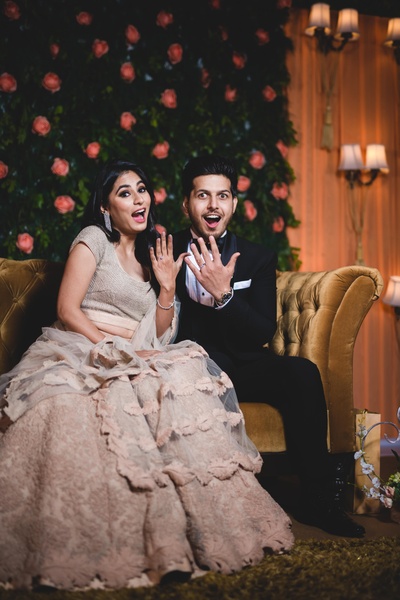 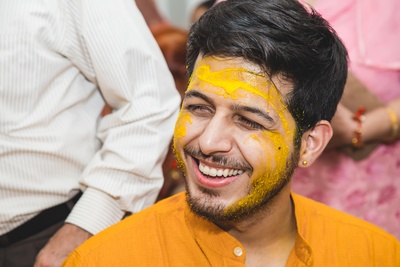 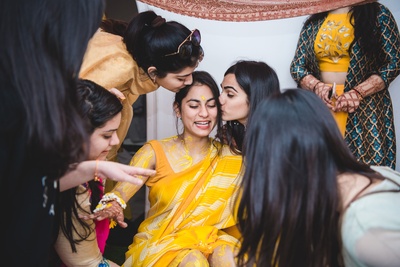 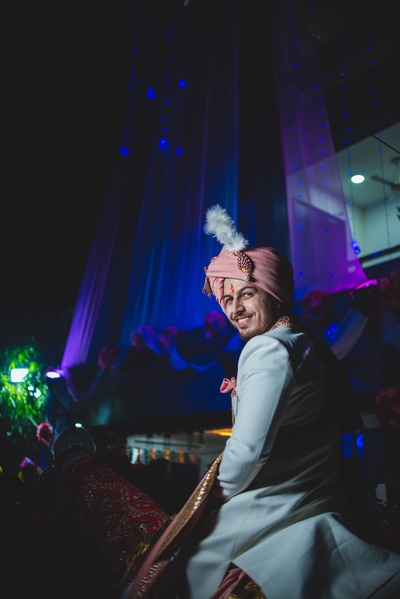 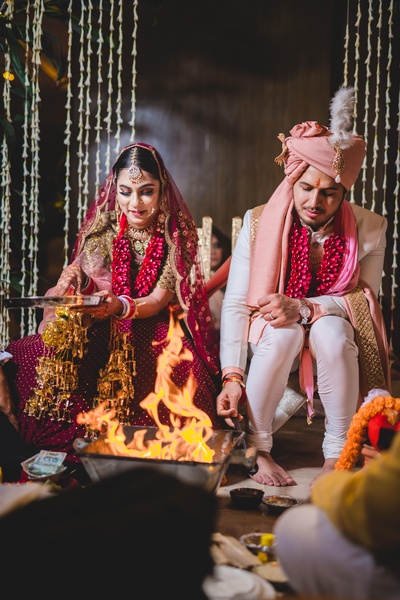 An Incredible Indo-Serbian Wedding- Ansh &amp; Slobodanka  ‘When love knocked on the doors of a lovely Indo-Serbian couple, they knew it was for a lifetime.’ “Being deeply loved... Dec. 15, 2020 Aishwarya and Himanshu Thailand Destination Wedding ‘When childhood lovers turned life partners in a beautiful home wedding set-up’ “The future for me is already a thing of the... Dec. 15, 2020 Jasnoor and Rakesh Lovely Ludhiana Wedding “Love is a friendship that has caught fire.” - Ann Landers ‘When colleagues turned friends and finally lovers, a cross-cultu... Dec. 1, 2020 Lockdown Wedding Diaries: Kajal Aggarwal Weds Gautam Kitchlu in an Intimate Wedding Ceremony in Mumbai We’ve all heard the famous saying, ‘Where there is a will, there is a way’ However, a thought that has truly resonated with thi... Oct. 31, 2020 Shruti and Ronak’s Big Fat Mumbai Wedding ‘When a chance meeting turned into friendship and graduated into love’ “Love is friendship that has caught fire” - Ann Lande... Oct. 29, 2020