Lohit & Rishika Vijayawada : When a tennis champ and data scientist fall for each other, they head straight for the home run! 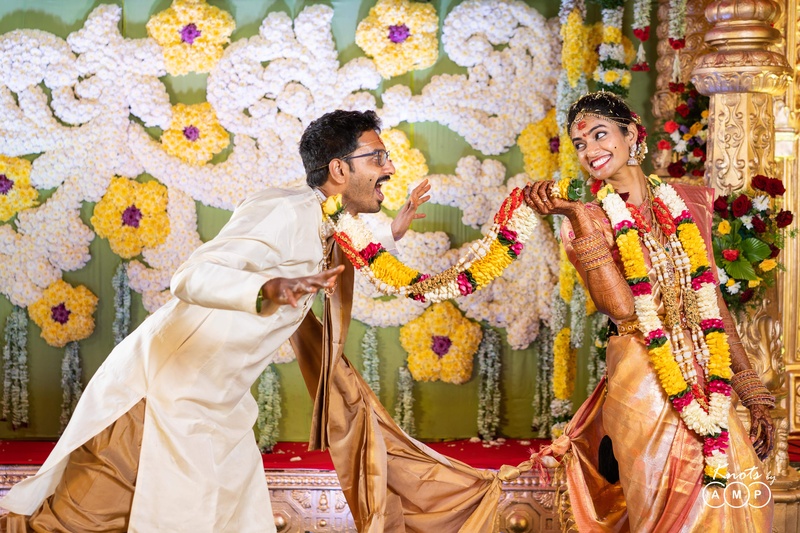 “You don’t find love, it finds you. It’s got a little bit to do with destiny, fate, and what’s written in the stars.” ― Anaïs Nin

Rishika and Lohit’s love tale is a pleasant reminder of this quote. For it seems straight out of the movies! Who could have imagined that Rishika, the talented tennis champion who went to the US for training at the behest of her parents (and the prospect of settling down in the US) would find love in an erudite IITian and data scientist, Lohit back home!

Families played cupid in this love-cum arranged saga. With Rishika in the US and Lohit in their home city, Hyderabad, the tinge of technology gave the much-needed kickstart for this love story to unfold. Soon they both started texting each other and hit it off instantly! The first thing Rishika noticed was their shared sense of humour and as she puts it, “He laughs at my lame jokes,” was reason enough to keep them bonded traversing the boundaries of time and space. As for Lohit, armed by the information passed on by his parents, and a few google searches later knew Rishika was too good to let go! He was charmed by her humility and down to earth nature. These qualities attracted him towards her and deep down decided that she was the ‘one’ for him!

When the start of this love story is so captivating, one can’t expect anything less from the proposal! So no disappointments here. When Rishika returned home from the US and met Lohit for the very first time at the airport, he proposed! In her own words, this is how the crazy proposal went –“When we finally were going to meet, we both were so nervous, we barely slept that night. We knew the connection was strong, but the fact that we never saw each other and wanted things to be exactly how we imagined it to be made us feel that way. Fortunately, things did turn out the way we wanted, and the connection was true! He proposed on day 2 with a no-option-answer, as his note said, “Will you marry me”? 1. Yes, 2. Not no.”

Rishika and Lohit’s wedding was a four-day vibrant celebration of Telugu culture. The first ceremony was held in the East Godavari town of Tatipaka. It was called pellikoduku and started early in the morning. Purifying the groom was the purpose of this ceremony. Lohit, dressed in a sherwani-churidar attire, saw his outfit quickly change colours as he got covered in heaps of turmeric paste, flowers and water. A fun scene indeed!

Day two began with the mehendi ceremony at Vijayawada. This was followed by the sangeet, where the couple, with friends and family in tow, danced the night away! The duo looked picture-perfect with Rishika dolled up in a peachy-coloured lehenga and Lohit in a Nehru jacket and kurta-churidar. Their beaming faces and broad smiles just spoke volumes about the fun they had!

The next day’s ceremony, called pellikuthuru, was held for the bride and took place in Vijayawada as well. Rishika was a vision in pastel-coloured Kanchi saree, accompanied by flowers that adorned her and completed the look. Following this, the d-day arrived, and the marriage rituals took place at the SS Convention Hall, ending with the midnight, muhuratam ceremony.

For the wedding, Rishika had dressed to the nines and looked every bit the South Indian belle in a red Kanchi saree. No less was Lohit, who looked just as dashing in a red and beige sherwani chudi suit! Together, they looked like a match made in heaven! The wedding ceremonies came to an end with the vratam pooja, which was held in Hyderabad.

Rishika decked up in Kanchi saree again and Lohit, in a kurta- churidar piece, as they headed for the home run.

The dedicated team of KnotsbyAMP helmed the photography for all the events. Beautifully capturing the joys and nuances of a traditional Telugu wedding, the frames speak for themselves! Blending with the beauty of coastal Andhra, replete with its overarching palm trees, endless green cover and traditional homes, the wedding album is a treat to the eyes! 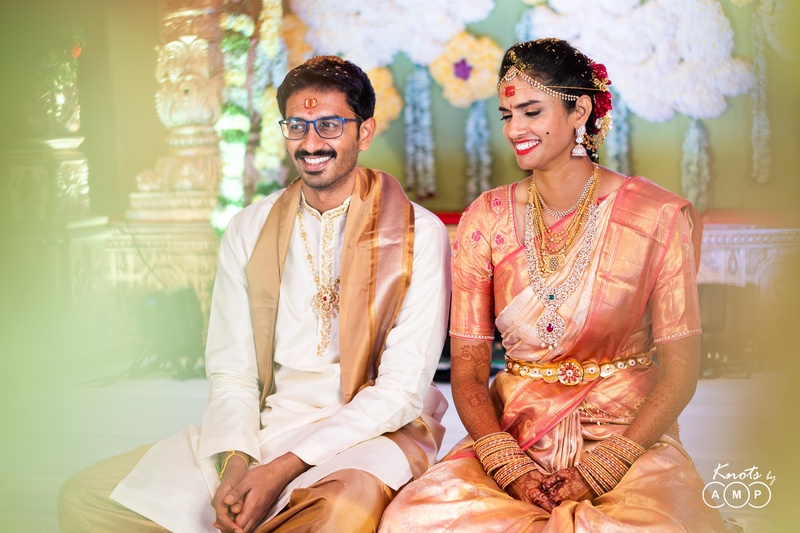 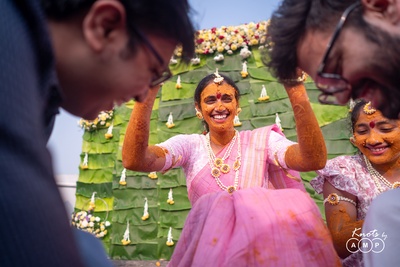 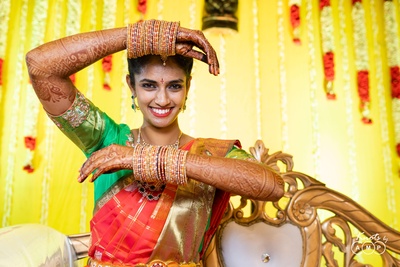 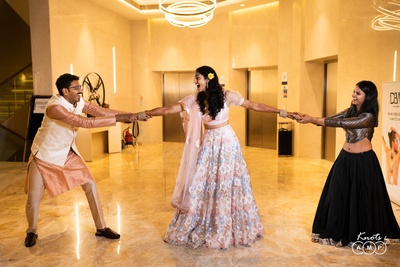 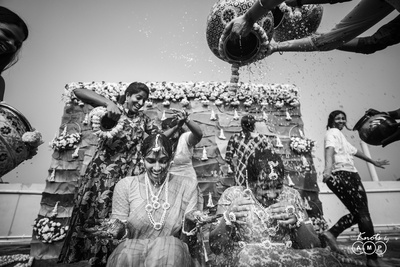 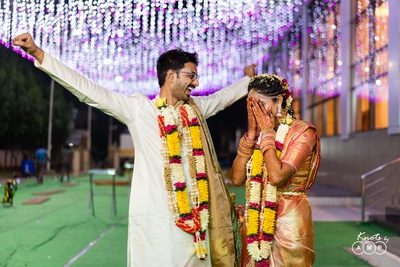 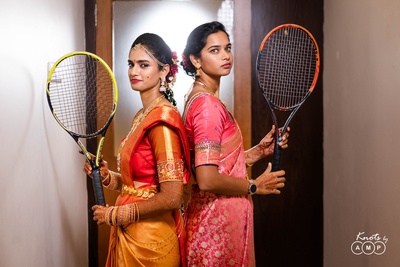 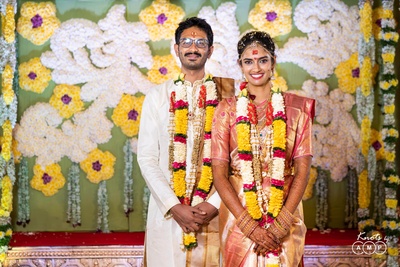 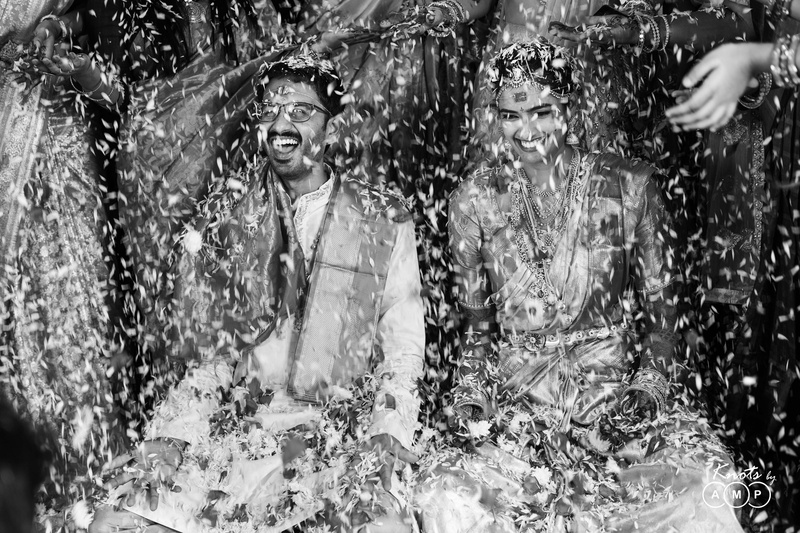 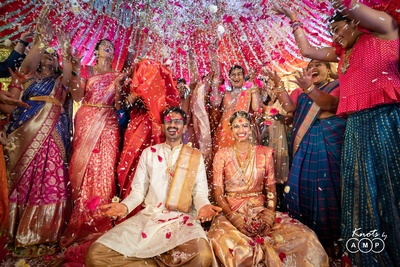