If you’ve ever witnessed and been a part of an Indian wedding, you’ll know exactly why they call them ‘big fat Indian weddings’. With functions spread over a few days and surrounded by plenty of guests, an Indian wedding cannot be complete without any show-sha! There are some Indians who were not just the talk of the town but the nation! Here’s a look at India’s 7 most expensive and extravagant weddings. When India’s richest industrialist, Mukesh Ambani’s daughter got married to the Piramal scion, Anand Piramal, the whole world took notice! They had a fairytale engagement at Lake Como in Italy, extravagant pre-wedding functions in Udaipur (that included more than 200 charter planes ferrying guests to the destination) and a beautiful wedding in Mumbai. Not just Indian celebrities, this wedding was attended by the former First Lady of the US, Hillary Clinton and Business Tycoon Henry Travis.

With 11000 guests and a double wedding, Sushanto and Seemanto Roy’s wedding was sure to make the headlines. Indian businessman and chairman of Sahara India Pariwar, Subrata Roy, made sure his sons’ get their dream wedding. He organized 110 different cuisines, private jets for his guests, got 101 underprivileged girls married and fed 150,000 beggars on this day! UK-based billionaire, Sanjay Hinduja and designer Anu Mahtani had a star-studded wedding in Udaipur. Dressed in Manish Malhotra ensembles and being entertained by none other than Jennifer Lopez this is one wedding we wish we could have been a part of. 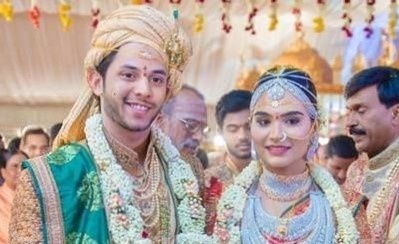 Karnataka mining baron Janardhana Reddy’s daughter Brahmani married P Rajeev Reddy, the son of a Hyderabad-based industrialist, in a lavish Bangalore wedding. The ceremonies were spread over five days and were attended by 50,000 people. Did you know, Brahmi’s wedding trousseau alone consisted of a saree worth ₹17 crores? Vanisha Mittal, daughter of one of the world’s richest men, Lakshmi Mittal, kicked off her wedding with banker financier Amit Bhatia in Paris. The wedding was held at the magnificent Vaux le Vicomte estate with Bollywood celebrities entertaining the guests with their performances. A Euro Extravaganza, the wedding of Shristi Mittal and Gulraj Behl was held in Barcelona. An army of 300 chefs and butlers were flown down from Thailand and India. Helicopters hovered over the venue to capture the perfect wedding shots of the couple and their guests. When Congress leader Kanwar Singh’s son, Lalit tied the knot with former independent MLA Sukhbir Singh Jaunapuria’s 26-year-old daughter Yogita, the groom got a chopper for tilak-shagun! Can you believe it? This 250 crore merger of two affluent families was graced by Bollywood celebrities. With guests like Bruno Mars and Manish Malhotra, Sonam Vaswani’s wedding with Navin Fabiani was a dream wedding. Adorned in a choker of uncut diamonds and Manish Malhotra ensembles, this wedding, held in Belvedere Palace, Austria was straight out of a fairytale! 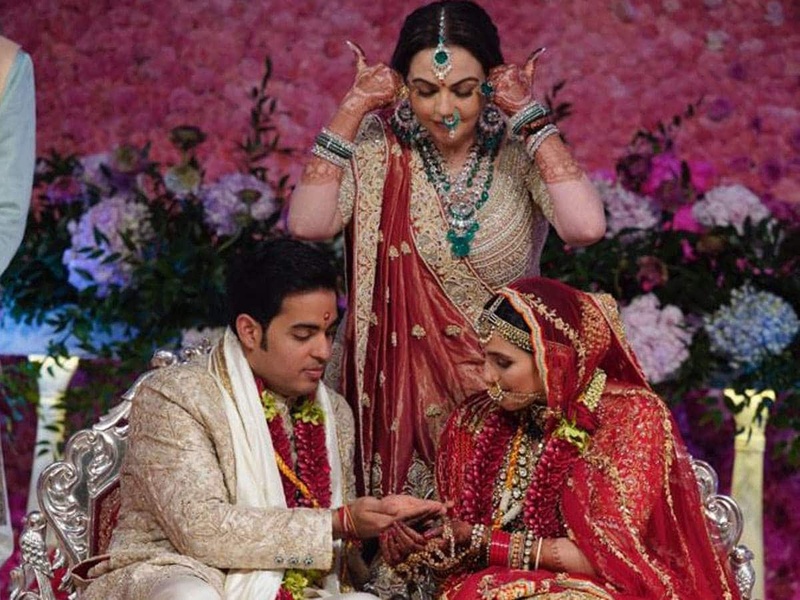 Early this year, the oldest son of Asia’s richest man, Akash Ambani got married to Shloka Mehta, the daughter of diamond tycoon Russel and Mona Mehta. Their pre-wedding functions took place in Switzerland while their wedding was held in Mumbai with Shah Rukh Khan, Karan Johar, Ranbir Kapoor and others as baraatis and artists like Chainsmokers and Coldplay as entertainers. Nita Ambani made sure to welcome her daughter-in-law with much love and diamonds. She gifted Shloka a beautiful diamond necklace that alone was worth ₹300 crore! Need we say more? The netizens went crazy when Indian cricket team’s captain, Virat Kohli and Bollywood actor, Anushka Sharma’s hush-hush wedding images were released. The power couple were dressed in Sabyasachi ensembles and tied the knot in the second most costliest resort in the world in Tuscany, Italy. This list would be incomplete without the Ranveer Singh and Deepika Padukone wedding. It was held at Lake Como, Italy followed by three receptions – one in Bangalore and two in Mumbai. The couple had both – traditional Konkani and Sindhi style weddings. Did you know, the couple also wore custom-made gold embroidered designer footwear to their wedding?

Which one of these surprised you the most? Comment below!

#TrendAlert - 5 Chantilly Lace Sarees that are Taking Over the Town Classic, timeless and sexy, lace sarees are slowly making a comeback. One of the most lace sarees is made of Chantilly lace. Ch... Nov. 18, 2019 Celebrities' Guide to Chandbali Earrings With a few days left for the winter shaadi season, it’s time to pin down the best of the best. Starting off with jewellery, let... Nov. 11, 2019 7 Celebrity-Inspired Wedding Outfits for Men The wedding season is upon us! If you’re anywhere near 25 years of age, you’ll have a lot of weddings to attend this time of th... Nov. 7, 2019 Bollywood Celebrities who are rumoured to be married in 2019! With the year 2018 raining celebrity weddings here and there, we were on a lookout for all the bollywood weddings in 2019 and h... Jan. 11, 2019 Celebrity Weddings that made the biggest of Headlines in 2018! #Wz2018Rewind 2018 was an year which rained celebrity weddings and HOW! From spur-of-the-moment ceremonies (like Justin and Haley), beautiful... Dec. 28, 2018