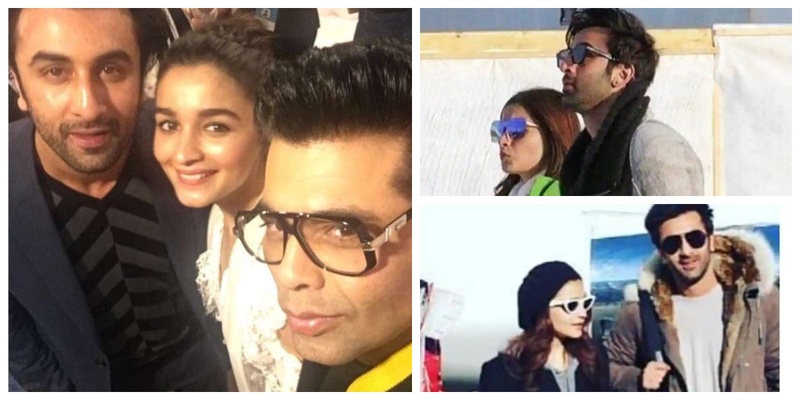 A lot has been speculated between Alia Bhatt and Ranbir Kapoor’s impending wedding, but nothing has come close to KJo’s declaration of the same. With some well used humour and some totally Bollywood style filmy dialogues that only KJo can pull off, he has done something that he never does. REVEAL a well kept secret!

As, you know that Akash Ambani-Shloka Mehta pre-wedding festivities in Switzerland’s St Moritz have been the talk of the town for the last couple of days. While we have now seen Coldplay and Chainsmokers perform live to the entire Bollywood performa a flash mob of sorts, this particular piece of information has had me totally stunned!

In this video, we can see Alia and Ranbir smiling embarrassingly as Karan Johar cracks a joke about them being ‘rab ne bana di jodi’. Yes you read that right. Karan says, “We have to say that rab ne bana di jodi… and I wasn’t talking about Akash and Shloka…I was talking about Ranbir and Alia because clearly wedding season is on and we are just getting inspirational because you never know when Ranbir… woh kabhi bhi haath se ja sakta hai.”

Well well, do I hear wedding bells already? I literally can’t keep calm about this!

Alia Bhatt has been giving major bridesmaids goals for the upcoming summer wedding season, whilst promoting Kalank! Alia Bhatt is the talk of the town for painting the town red with her bae Ranbir Kapoor, and keeping her fans guessing when the... April 6, 2019 This Mumbai bride decided to hop to the nearest mall and SHOP instead of waiting for the baaraat!   Baraats are infamous for being late. The journey to be covered would be less than a kilometre but the baraat will always take... March 6, 2019 Beep beep! Major bridesmaids lehenga inpiration coming your way!   Being a bridesmaids is no joke. You’ve to tend to the guests and the bride, relieve her of her stress, eat allll the tasty fo... March 2, 2019 Destination Wedding in Nashik – Aaditi Weds Dhruv at Soma Vine Village Do you believe in ‘love at first sight’? For our cute couple, Aaditi and Dhruv, it was love at first date! The world of dating ... Sept. 20, 2020 Srishti and Dev Doab Vilas Resort Wedding ‘When love knocked on the doors of a corporate professional and defense officer, they knew it was for a lifetime!’ “Being de... Sept. 18, 2020