The entire celebrity guest-list and pictures from the big-fat wedding of Isha Ambani and Anand Piramal! 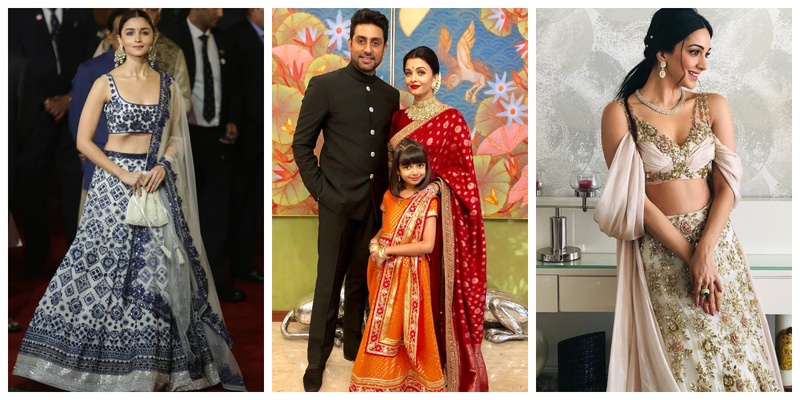 Asia’s richest man and oil-and-telecom tycoon Mukesh Ambani’s daughter and heiress of the Ambani empire – Isha Ambani is going to tie the knot to billionaire Ajay Piramal’s son – Anand Piramal today and the #weddingshenanigans have begun. If the pre-wedding festivities were not proof already, here’s saying that this wedding is going to be the biggest affair the country has ever seen!

After all the estimated budget for the big-fat Ambani-Piramal wedding is $100 million! Which is just a 10 Mil short to the royal wedding of Prince Charles and Princess Diana! *yes you read that right* The wedding is taking place at the Ambani’s residence – Antilia! Because hey, if you reside in the world’s most expensive residence, why not get married there itself?

Without much further adieu, here’s bringing to you all that happened at Isha Ambani and Anand Piramal wedding. So, turn the volume up, get yourself some popcorn and keep scrolling down:

Brothers Akash and Anant Ambani were spotted outside Antilia all geared up to receive the Anand Piramal’s baraat:

…and here’s the Ambani clan  – Shloka Mehta, Akash and Mukesh Ambani and Radhika Merchant awaiting in anticipation to receive the baraat:

Antilia is all decked up in flowers and fairy lights for Ambani’s eklauti beti wedding :

Abhishek Bachchan and Aishwarya Rai arrived at the venue with their munchkin – Aaradhya Bachchan:

While Amitabh and Jaya Bachchan arrived with their daughter Shweta Bachchan Nanda and their granddaughter Navya Naveli Nanda:

The newly weds Priyanka Chopra and Nick Jonas too gave some major #CoupleGoals:

Alia Bhatt is giving some serious bridesmaids goals too :

Shilpa Shetty is stunning in a Tarun Tahiliani ensemble:

Former US secretary of state Hillary Clinton also arrived for the wedding:

Aamir Khan was one of the first guests to arrive with Kiran Rao:

Kiara Advani stunned in a beige lehenga and her blouse made some serious noise:

The one giving us major ‘Kabhi Khushi Kabhi Gham’ feels:

Yeh Rishta Kya Kehlata Hai Fame Mohena Ties the Knot in Royal Style! Mohena Kumari Singh, is quite the popular face on Indian television thanks to Yeh Rishta Kya Kehlata Hai and that’s not it - th... Oct. 16, 2019 Se Remarier: Justin Bieber and Hailey Baldwin Blockbuster celebrity weddings have become quite a rage these days. All of us remember Priyanka Chopra and Nick Jonas’ opulent ... Oct. 10, 2019 5 Takeaways From Idris Elba and Sabrina Dhowre's Wedding Nuptials Weddings are said to be made in heaven. This white destination wedding held in the Morrocan sunshine was enchanting. British ac... Sept. 8, 2019 TV Sensation Lovey Sasan and Koushik Krishnamurthy's Wedding Pictures are too cute to handle! It’s already raining celebrity weddings in 2019 too! Just after Prateik Babbar tying the knot with his girlfriend and Sheena Ba... Feb. 21, 2019 All the deets and pics from Neeti Mohan and Nihar Pandya's mehendi ceremony! Remember the bridesmaids shoot Neeti Mohan had with her sisters that had gone viral? Yes yes, the same one where she posed in s... Feb. 18, 2019