These celebrity dance performance videos from Sonam Kapoor’s reception prove that it was definitely the wedding of the year! #Sonamkishaadi 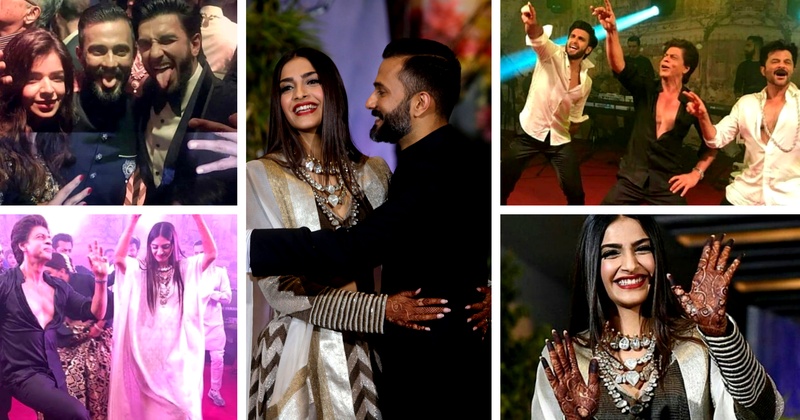 Sonam Kapoor and Anand Ahuja’s reception last night was one affair to remember! The Kapoors and the Ahujas were on their feet since morning but showed no signs of fatigue at the reception party that took place at the Leela, Mumbai.

In fact, the Kapoor-Ahuja clan was way more energetic at the party and burnt the dance floor (quite literally)!  Anand himself seemed to be in his A-game at the reception party. The night saw him shaking his leg as he danced to some hit Bollywood tracks with Salman Khan, Shah Rukh Khan, Ranveer Singh and his father-in-law Anil Kapoor amongst others! Well, that explains the Nike sneakers!

Here are some snippets from the grand reception night explaining why #SonamKiShaadi is officially the wedding of the year and taking the entire social media by the storm as we speak! (For pointers there’s Ranveer singh being himself, Arjun and Anil Kapoor burning the dancefloor, Shah Rukh flaunting his six pack….. and more). Scroll down to have a look:

Anil Kapoor and Arjun Kapoor starting the performance night with their the dance moves (with their blazzers intact for now):

Anil Kapoor sure can’t contain his excitement at his daughter’s reception:

Sonam Kapoor’s surprise sangeet performance by Swara Bhaskar, Kunal Rawal and some of her closest friends:

…. the dance practice finally paid off!:

Karan Johar Dancing to ‘Prem Ratan Dhan Payo’ with his expressions is priceless:

Anil Kapoor and Ranveer Singh Killing it at Sonam’s reception:

Mika Singh and Salman Khan singing ‘My name is Lakhan’ while SRK and Anil Kapoor dance to it:

These videos of the celebs dancing like no one’s watching definitely made my day and we hope it made yours too! #Sonamkishaadi totally lived up to their wedding hashtag – “EveryDayPhenomenal.”

Yeh Rishta Kya Kehlata Hai Fame Mohena Ties the Knot in Royal Style! Mohena Kumari Singh, is quite the popular face on Indian television thanks to Yeh Rishta Kya Kehlata Hai and that’s not it – th... Oct. 16, 2019 Se Remarier: Justin Bieber and Hailey Baldwin Blockbuster celebrity weddings have become quite a rage these days. All of us remember Priyanka Chopra and Nick Jonas’ opulent ... Oct. 10, 2019 TV Sensation Lovey Sasan and Koushik Krishnamurthy's Wedding Pictures are too cute to handle! It’s already raining celebrity weddings in 2019 too! Just after Prateik Babbar tying the knot with his girlfriend and Sheena Ba... Feb. 21, 2019 All the deets and pics from Neeti Mohan and Nihar Pandya's mehendi ceremony! Remember the bridesmaids shoot Neeti Mohan had with her sisters that had gone viral? Yes yes, the same one where she posed in s... Feb. 18, 2019 Rajinikanth's youngest daughter, Soundarya just got hitched and you've got to check out the pictures! Rajinikanth’s youngest daughter Soundarya tied the knot to actor-businessman Vishagan Vanangamudi at the Leela Palace Hotel in ... Feb. 13, 2019