Who wore what at the star-studded reception of Mrs. Sonam Kapoor Ahuja! #SonamKiShaadi 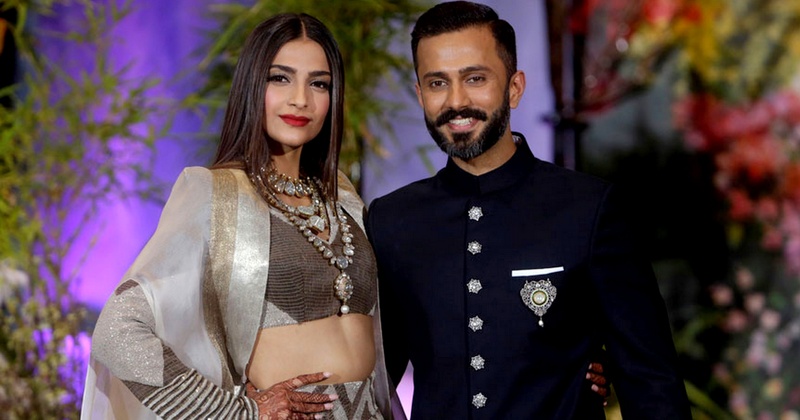 Sonam Kapoor and Anand Ahuja’s reception last night was one hell of an event. It took place at The Leela in Mumbai after their day wedding ceremony (Anand Karaj). The guest list saw all the big names of bollywood that you can think of making it one big bollywood party!

Defying all traditions, Sonam Kapoor chose to ditch sequins & wore a graphic Anamika Khanna creation and looked phenomenal. This was the first time we saw her letting her hair down looking absolutely ravishing!

Anand on the other hand looked his dashing self in a Raghavendra Rathore bandhgala paired with Nike sneakers! *So cool*

Sanjay Kapoor with his son:

….and with their son and daughter-in-law – Akash Ambani and Shloka Mehta in Abu Jani Sandeep Khosla:

Gauri was spotted in a Tarun Tahiliani ombre jacket with a jewelled neckline!

Abhishek and Aishwarya – don’t they make a stunning couple?

Shweta Bachchan is a vision in a Abu Jani Sandeep Khosla lehenga:

Alia Bhatt was a stunner in this Sabyasachi Mukherjee summer collection:

Ranveer Singh stealing all hearts in that suit:

His shoe game was on point!

Loving the pop of green on her all-white Abu Jani Sandeep Khosla attire!

Ranbir Kapoor chose to wear a Manish Malhotra creation for the reception:

Rekhaji looking phenomenal as ever:

Kangana Ranaut took the traditional route in a saree gifted by her sister:

Shilpa Shetty looking her gorgeous self in a ice-blue Tarun Tahiliani draped saree:

Brothers from another mother – Siddharth Malhotra and Aditya Roy Kapoor:

Jackie Shroff with his wife:

Let’s have a look at some inside-the-reception pictures now:

An up close look at the cake:

The guest list never came to an end right? Well, if you haven’t seen enough about Sonam’s wedding and mehndi then here you go –

Everything that you need to know about Sonam Kapoor’s mehndi & wedding ceremonies!

Shah Rukh Khan, Salman Khan, Hrithik Roshan, Katrina Kaif add stardust to Poorna Patel's Reception in Mumbai! Politician Praful Patel's daughter Poorna Patel tied the knot with industrialist Namit Soni over the weekend and it sure was an... July 23, 2018 These 5 new Lehenga-Saree designs sported by Sonam Kapoor are totally drool worthy! Sonam Kapoor Ahuja never seems to go out of spotlight - starting from #sonamkishaadi to her latest #canneslook, she has always ... July 21, 2018 These Unseen Pictures from Sonam Kapoor's Wedding will Literally Melt Your Heart! Whoever said that “fairytales don't come true,” didn’t witness the love story of this #EverydayPhenomenal couple -  Sonam Kapoo... July 3, 2018 Sonam Kapoor opens up about her love story that broke the internet! #Sonamkishaadi A love story that began on Snapchat to a wedding that literally broke the Internet, Sonam Kapoor Ahuja and Anand S Ahuja have b... June 30, 2018 After Alia Bhatt, Ranbir Kapoor also hinted at getting married 'soon'! Alia Bhatt and Ranbir Kapoor - B-Town's newest lovebirds have become everyone's center of attention, owing to their whirlwind r... June 19, 2018