Love at First Swipe: 5 Tinder Stories That Ended In A Wedding! “I had known this guy since my freshman year of college. I always thought he was cute but never really considered anything beyond friendship. We got to know each other really well my senior year and I developed the biggest crush.
“One night on Tinder his face popped up, I swiped right, and it was an instant match. I was skeptical until a few nights later he expressed that he had feelings for me for years. Our relationship just took off from there and we’re getting married in August.”
—RodriguezLO 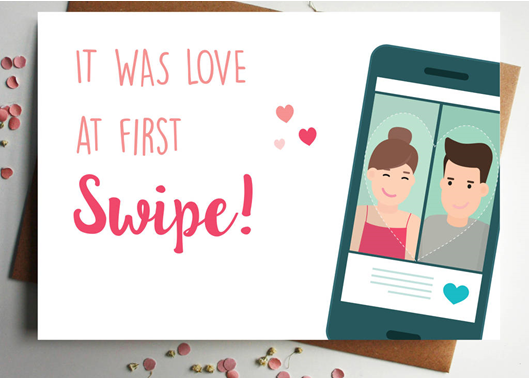 Varun was working with an IT firm in the US and dating someone for the longest time. Unfortunately, they happened to break up, and that’s when he decided to come back to India for a mini break. He’d been on Tinder all this while. Just like most of us are! Just for the heck of it! One fine day, his sister and best friend decided to mess around with his account and swiped right on a girl they knew would never even give him a second glance! As luck would have it, Pragati too showed interest.
“He happened to meet her just 3 days before he was headed back to the States and Cupid struck. The two met up for the next two days too and started having long Skype chats after he went back. Fifteen days after he left, we got a call from Varun telling us that he wanted to marry Pragati! He had even Skyped with her parents by then. Two months later, he flew back to marry the woman of his dreams! It’s been 6 months since the two of them have been happily married.”

Alex: “I messaged her. It’s actually a famous line among my friends. I said, ‘Hi, Neda’ and waited a couple minutes. Then I said, ‘Bet you weren’t expecting such a smooth opener. She started laughing.”
Neda: “We were both living in Houston and he suggested we meet on that Friday, but that was the night of my going away party because I was moving back to L.A. [where I’m from] in two weeks. So, we went out right away. We went to get drinks and ended up closing down the bar.”
Alex: “There were no awkward silences, no awkward pauses. Everything I expected and hoped it to be based on our conversation on Tinder ended up materializing and being the same in person. ”
Neda: “We hung out every single night as much as we could for, literally, two weeks straight. We said ‘I love you’ after a week.” “After going hard in the Tinder paint off and on for two years I met my current boyfriend on it by a weird twist of fate. I was at my cousin’s bridal party and a woman I hardly knew kept asking me what was happening in my life. My response was ‘I bought cats yesterday’ ‘cause I actually had.

“So in a mimosa-drunk state I saddled up to my newly divorced aunt and showed her how to Tinder. Joe [my now-boyfriend] popped up and she said, ‘Can I swipe him for you? He’s handsome.’ After one year of dating, he’s moving in with me and my cats.” “I had Tinder for a long, long time, like longer than I am willing to admit. One night, I matched with this guy and his first line was “Hello Gorgeous” and I thought, Oh great, another one of those guys…we chatted for two weeks before we officially met.

He cancelled on me twice, so when he rescheduled the next date I told him if he cancelled to lose my number…and apparently he liked that because when he showed up at my house he just kissed me. We’ve been going strong for a year and a half. We moved across the country together, travel together, and talk about marriage all the time. Thanks Tinder for introducing me to my best friend.”

5 Creative and Trending Liquor Ideas for Your Cocktail Party!

15 LGBT Indians That Found Love and Got Married, Irrespective Of Gender, Race And Colour.

Unique Real Life Proposals That Will Steal Any Girl’s Heart

6 Serious Dating Apps That You Should Try Out! (No, Not Tinder) TRULYMADLY Distance doesn’t matter on this app. It matches you based on similar likes, interests, etc. You can also play cool g... March 23, 2017 7 Things to Never Forget Before You Propose To Your Woman! Find out her ring size.   On the topic, BRING THE RING!   Photographer Don’t forget your photographer. Capture the moment!  ... March 20, 2017 An Incredible Indo-Serbian Wedding- Ansh &amp; Slobodanka  ‘When love knocked on the doors of a lovely Indo-Serbian couple, they knew it was for a lifetime.’ “Being deeply loved... Dec. 15, 2020 Aishwarya and Himanshu Thailand Destination Wedding ‘When childhood lovers turned life partners in a beautiful home wedding set-up’ “The future for me is already a thing of the... Dec. 15, 2020 Your Complete Guide to Choosing the Best Bridal Lehengas for Your D-day! Every aspect of an Indian bridal avatar celebrates colour, culture, legacy and zest. Such is the level of excitement and thrill... Dec. 1, 2020